Movie Review: ‘The Ballad of Buster Scruggs’ is the perfect canvas for the unique art of the Coen Brothers 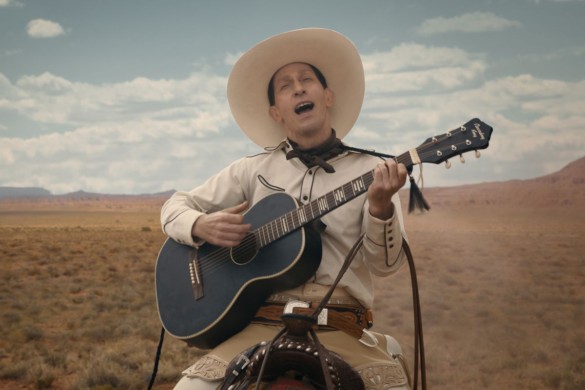 Synopsis: An anthology film comprised of six stories, each dealing with a different aspect of life in the Old West.

Life is uncertain. Bad things happen that cannot be explained. Our lives are not always fair. In fact, they rarely ever are.

These are pillars of the Coen Brothers’ artistic expressions and they have found the perfect canvas in the new film from the dynamic duo on Netflix, The Ballad of Buster Scruggs.

That’s not to say that this is the best Coen Brothers film or even in their top tier. Their filmography is so legendary that they’ve made it hard on themselves to even crack their own Top Ten. I ultimately think it will hold up quite well, but now is not the time to argue on where this film lands compared to their others. Now is the time to relish in the fact that this film even exists.

There have been some broad conversations on Film Twitter and among cinephiles lately about the rightful place that Netflix holds. On the one hand, the streaming giant is putting out films (like Buster Scruggs) that might never have seen the light of day otherwise. On the other hand, these films are routinely given just a token theatrical release, meaning that most fans will never see them on the big screen.

While I will agree with the notion that the theatrical experience is premium and should be protected and preserved, I also understand that not everyone is able to go to the theater to see every movie that comes out. For that reason, I’m thankful that Netflix is releasing films like Buster Scruggs so that they will at least be seen.

And this is certainly a film that demands to be seen.

The Coens are famous for their ability to create memorable characters. In fact, I think they are the best writer/directors we have working today in that regard (sorry, Quentin Tarantino). They find ingenious ways to infuse their dialogue with folksy wisdom and quotable proverbs. It makes their particular brand of moviemaking the perfect companion for an anthology film such as this – one that invites character after character before quickly dispatching them.

There are six stories within this film – a singing sharpshooter, a thief, an impresario and his young artist, a prospector, a young woman traveling with a group on the Oregon Trail, and five members of varying societal classes in a stagecoach. Each story is told through a storybook with the title The Ballad of Buster Scruggs and Other Tales of the American Frontier. We see a hand turning the pages of the book and opening up to each section with a color plate illustration of the story we are about to watch.

Each story shows a different side of the American western frontier. The Coens have routinely turned to The West for their yarns and tall tales, and they have had great success doing so. Maybe that is because The Wild West offers the necessary expanse of opportunity to match their seemingly endless amounts of creativity.

While the film’s writing is certainly at the level of excellence you’d expect from Joel and Ethan Coen (it won the Golden Osella Award for Best Screenplay at the Venice Film Festival where it premiered), its other technical elements are not far behind, if at all. This is a beautiful film, with gorgeous vistas of the American Frontier. Bruno Delbonnel (who worked with the Coens on Inside Llewyn Davis) worked as the DP on the film, and he finds striking ways to visually support the narratives that the Coens weave in and out of.

Each one of the six stories in this anthology collection has its own merits. I was struck in various ways by each of them. If I had to choose a favorite, I would probably go with the film’s final story, The Mortal Remains, which puts us in a stagecoach with five people from different classes and backgrounds. There are others that I found very nearly as good (All Gold Canyon and The Gal Who Got Rattled are close behind). First off, this is basically a writer’s dream – put a group of people together in a small space and have them captivate the audience with their words and actions. They’re all bunched together in a stagecoach. They can’t go anywhere. Yet their conversations are riveting and filled with the folksy wisdom we’ve come to love from the Coens. It also contains a quote that will go in the annals of Coen Brothers history right up there with “The Dude abides.” and all the “Darn tootin’s” from Fargo. One character repeatedly exclaims that “People are like ferrets!” and I knew the Coens had me wrapped around their fingers once more.

With each movie they release, the Coens continue to show their incredible gift for entertaining and conveying truth at the same time. Their characters are darkly funny and remind us of ourselves even if we’ve never been within 1,000 miles of Fort Laramie. We all know what it’s like to feel that life has given us a raw deal – that we’ve worked hard for nothing. We all know what it’s like to feel pain and regret. And we all know what it’s like to have doubts in the face of life’s cruel uncertainties. The Coens continually find new ways to unearth these universal truths through their wonderful characters. The Ballad of Buster Scruggs is a great example of this, and I look forward to watching it many more times.

Hear our podcast review on Episode 301!