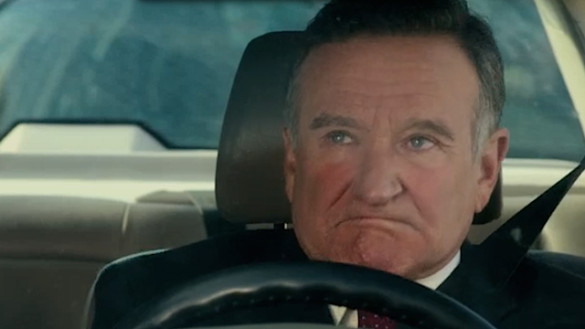 Synopsis: A curmudgeonly man is mistakenly told that he has 90 minutes to live by his doctor and promptly sets out to reconcile with his wife, brother and friends in the short time he believes he has left.

DIRECTION
The Angriest Man in Brooklyn wastes no time setting it’s mood, when the first scene of the film showcases it’s lead character, Henry Altmann, sitting in his car during rush hour with the most pissed off look of all-time. While director Phil Alden Robinson tries to keep it light, the tone is constant anger and loss of control. Robinson tries to capture the chaos of resentment and reconciliation when life is coming to an end, however it mostly becomes just a punchline. Some scenes feel lazy and he fails to capture any significance from Mila Kunis, which isn’t surprising, but hurts the films foundation. The ending was well handled though, and nails it’s poignancy, despite it not being 100 percent justified.

SCRIPT
The story centers around Henry Altmann (Robin Williams), who’s an angry man and lost the happiness life used to give him. In fact, anger is his muse. Once he’s in a car accident, which of course sets him off into the right mood, he goes to the hospital to find out he’s been diagnosed with a brain aneurysm. Instead of being treated by his normal doctor, he’s instead looked at by Dr. Sharon Gill (Kunis), which is a stretch to believe in itself. At any rate, Henry is angry at his diagnosis and forces Dr. Gill to give him a timeline to live and when she panics, she says 90 minutes. As you can imagine, this would put anyone into a dramatic state of reminiscence and reflection. Henry then goes on a journey of reconciling relationships, all while contemplating ways to end his journey on his own terms. While it’s a depressing premise, it’s also compelling and makes you ponder about what your own journey would like. However, and unfortunately, that’s where the compelling nature of the story ends. The characters aren’t grounded in reality and the story moves quickly to absurdity for the sake of “humor”. While most of the jokes fall flat, Williams is naturally funny and comes out well in his rants, which isn’t really meant for humor. All in all, it the story wastes it’s premise, but does have some sentimental moments and the ending was well done.

PERFORMANCES
This isn’t Robin Williams’ wheelhouse and he lacks a great script, but his natural tendencies for humor carry him far in this film. He channels his inner Lewis Black, let’s loose and really goes for it. While he doesn’t hit every note, there are few that do hit well. His despicableness draws you in just enough, and it’s also compelling to understand why he acts the way he does. Mila Kunis on the other hand is just flat out awful. She’s not believable as a doctor and her character arc with Williams is muddled and has no conviction. While part of it is a script issue, Kunis doesn’t add any value to the character. Peter Dinklage on the other hand was a bright spot. He’s not in the film a ton but when he’s there, he steals the show and is the most grounded character in the film.

SCORE
Mateo Messina actually has a descent score here and probably made some scenes feel greater than what they actually were. It’s subtle as you would imagine in a film like this, but because the film is very poignant, it does have some legs. It’s not enough to save the film or make it that much better, but it helps a little.

FINAL THOUGHTS
All in all, The Angriest Man in Brooklyn isn’t the worst film I’ve seen all year but it’s certainly a disappointment. I like Williams and he’s not terrible, but the script really held back from a theme that was compelling when it was focused on him and his tragedy. What would you do if you knew you only had 90 minutes to live? Or a week? A tightened script could of done this film wonders, but as is, it’s a mess.