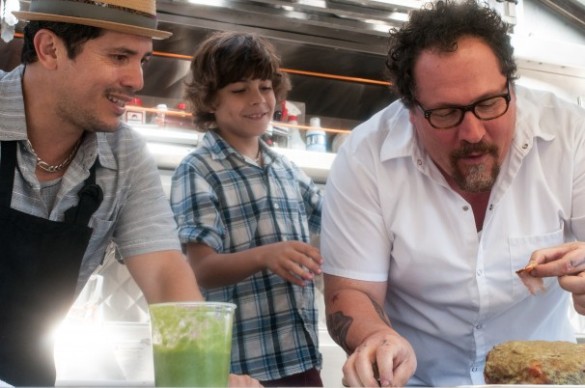 Synopsis: A chef who loses his restaurant job starts up a food truck in an effort to reclaim his creative promise, while piecing back together his estranged family.

DIRECTION
Chef will leave you full of good humor, full of creativity and hungry, as I made the mistake of not eating before this movie. I believe the theater is purposely using food aroma throughout this film because you can smell the ribs off screen. Jon Faverau is no stranger to wearing multiple hats in films as he’s directed and acted in Elf, Iron Man 1 & 2 and a few others. Favreau had a great time making Chef and it’s the little things in the film he does that keeps the film interesting and makes it fun. Social media was used creatively to spread information very quickly, which is funny since Favreau’s character knows nothing about Twitter to begin with and had to learn it’s power the hard way. Favreau plays with this idea and it delivers some of the best scenes in the film as the newly @ChefCarlCasper finds himself in a huge Twitter war with a big food critic. As the film goes on, Favreau continues this use of Twitter and social media in a way we don’t see much in film, which was pretty effective. I like how the film was structured too, using many locations and it’s natural sights and sounds to enhance the authenticity of the film.

SCRIPT
Chef deals with the positives and negatives of social media and shows each extreme, which was injected into the story really well. Chef Carl Casper (Jon Favreau) has become a prominent chef in Los Angeles, California and he runs the Brentwood eatery Gauloises kitchen. We see that he works alongside his two buddies Martin (John Leguizamo) and Tony (Bobby Cannavale), who are a close group of guys. Once Carl learns that famed food blogger Ramsey Michael (Oliver Pratt) plans to visit his restaurant for a review, Carl plans to dazzle him with an adventurous new menu. But the restaurant’s owner, Riva (Dustin Hoffman), insists he serve the same safe and predictable dishes that have kept the place packed year in and year out. Disappointed at the meal’s lack of originality, Ramsey writes a scathing review, which—along with a video of Carl’s embarrassing out-of-control response—quickly goes viral of course. Carl’s career has suddenly come crashing down and he now finds himself jobless with no prospects to work. Carl was so caught up in his career that it ruined his marriage and his relationship with his son Percy. Down on his luck, Casper decides to head to Miami with his successful ex-wife Inex (Sofia Vergara), who talks him into getting him a beat-up old food truck. I am sure you can tell where the rest of the film goes, nevertheless this film is still remarkable even with a predictable plot. The father-son dynamics it has offer some emotional depth and does a fantastic job of showcasing their journey of transformation. It took losing everything to see how much he had in common with his son, and by the end, you develop a connection to both of them and any good-hearted spirit cannot help but enjoy the climax. Oh an there’s great looking food.

PERFORMANCES
Favreau did a stand-out job portraying a chef and it is obvious his training with Roy Choi helped make his role believable. Vergara’s character was written just for her in mind so if the role was specific for you than I guess that means you did a great job. The most surprising role in this for me was Robert Downy Jr. RDJ played a very small role and I am sure it was just to do a favor for directing the best Iron Man movie. RDJ being in this film just shows how much everyone likes Favreau and his dedication to his films. Leguizamo had a few moments as Martin and overall he and Favreau worked well together.

SCORE
The film was highlighted by an awesome musical compilation that features different styles of music for each location they were in. Los Angeles had a dancing puppet named “ Mr. Bonetangles” jamming to some Sexual Healing. In Miami we get the nice beats of Spanish music as well as some rock’n’roll in Texas, which was fitting as well. If you buy any soundtrack this year this will be the one to buy.

FINAL THOUGHTS
Finally, this film has some of the best food I’ve ever seen, so make sure you do not go into this film hungry as it will not be pleasant seeing the ribs, steak and even grilled cheese on the big screen. Chef is a culinary masterpiece that adds enough spice to cook up a great storyline worth tasting.