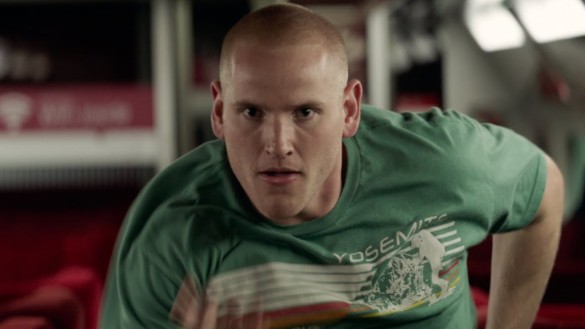 Synopsis: Three Americans discover a terrorist plot aboard a train while in France.

Clint Eastwood further continues his trek of adapting such fresh, long-lived authentic events that he attempts to get his hands on. After a slew of ‘based on a true-story’ outings including his latest mildly reputable, Tom Hanks driven Sully – these foreseeable genre choices don’t seem to be coming to a halt anytime soon. At which point I’d say, where does one even begin with The 15:17 to Paris? Going against orthodox casting decisions, not only does Eastwood bite the bullet through the casting of non-actors but stifles an absurd amount of reliance in these heroes who are portraying themselves to stand as the Achilles of this film. No one wants to hear this, but he’s running out of biopic ideas quickly and after witnessing this project, there needs to be some sort of final straw approaching.

As efficient as Eastwood is at contriving universal exposition in to his films—most notably his work on Gran Torino and even American Sniper—much like every other integral facet of this film, here it converts to being quite the snafu. The time spent inaugurating this so called, “exposition” is an extensive ploy to expand and fill the remaining allotted runtime building up to the climax. These childhood actors that are depicting early representations of our valiant heroes display such a minimalistic array of emotions and frankly just any basic acting chops at all. In which case it further provides a stairway to our now adult protagonists, that share an identical sense of a monotonous presence that was made so apparent earlier in the film. And just as it fools you into wanting to believe everything is soon to be ignited, it falls back to its meandering trivial state.

At least with Eastwood’s past couple outings, he seems to embrace this non-linear narrative structure that sews the pivotal plot points of the film early on, only to reel in the audience nearing the end. There’s definitely no level of surprise here seeing as he utilizes this technicality once again. While that narrative configuration could’ve been engrossing when present, there’s not enough story nor substance to maneuver an account such as this. Especially, with reports being as brief as this one was. Make no mistake however, Eastwood is intrinsic in relation to the magnitude of the event. The time spent reflecting is indeed momentous and becomes evidently apparent here. There’s just not enough of material that can kindle any sense of fascination. This including the tone equally. There’s an encapsulation of the ultimate detrimentality that’s been beaten down and locked away and sheathed by articulate themes of heroism and of course, hope. Sadly even those advance to be overshadowed by the 45 minutes or hour they spend showing our main characters playing tourist in Europe. With the threat-level acting more as a rarity, the light-hearted soul-searching and treading leads in to the direction of the mini-speech Spencer gives about life (which is an obvious foreshadowing). But I’m sure somewhere, beneath all of the befuddled themes and tonal inconsistencies, there just might be a more superior film to be found.

This film’s repulsive second act, is one of the most appalling experiences I’ve had in a theater. The entirety of this supposed rising action, consists of these men partying, eating, and partaking in tours all across Europe. There is absolutely nothing that can redeem a film when you contain a formula like that as deep as you are in to the movie. Especially for something that relies on true accounts but contains such succinct character displacement and development throughout this addled attempt at a conservative three-act structure. It’s pretty shameful considering any and all emotional impact post-climax is exiguous and unfulfilling. Once again though, I suppose the films repercussions were superlatively ample in comparison to their expectations.

As much as one would love to constantly commend these courageous men for their heroism, there’s only so far you can go. It’s rather captivating with the realization of their actions, but these people are not actors. Yeah, they’re all attempting to exhibit a solid performance and Spencer Stone isn’t half-bad either, but as a unit there’s not a big enough presence of personality for them to act as a possible makeshift spark plug for the movie. I can’t blame Eastwood though as the idea of casting these people who lived through this gives the opportunity for more authenticated potential and a much bigger leash for sentimental drive as opposed to casted actors, who’d be imitating the trials and emotions that were fully evinced. It’s an interesting experiment, but now we’re fully aware as to why we don’t see a settlement like this as often in this demographic. It’s also not the most genuine motivator when your script is a deplorable wasteland for such a gripping reality.

Ahh, how I wish we could’ve seen where it all went wrong. Yikes, The 15:17 to Paris is well, disappointing. Not that I had any expectations going in though. This trio of men truly do deserve a much more intact recount of their experience. I just hope now Eastwood stays away from this genre… But it looks as though he’ll be back soon as he’s attached to direct another film based on true events – which is currently in development. Enough chiding though, avoid this at all costs.

Hear our podcast review on Episode 260: