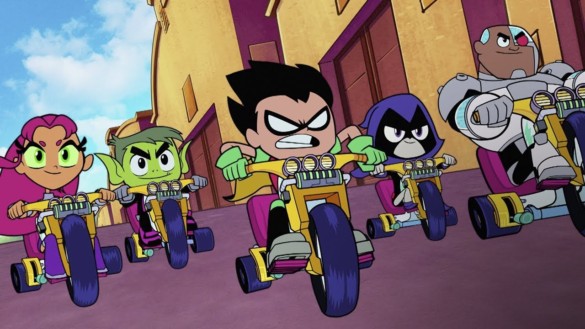 Synopsis: The Teen Titans search for an arch nemesis to defeat so they can prove they are worthy of getting their own big Hollywood movie.

Teen Titans Go! has been a staple on Cartoon Network since 2013. It’s a spin-off of Teen Titans (2003-2006) that’s aimed towards a younger audience. Teen Titans Go! To the Movies stays true to the television show, now with an hour and a half for more cartoon shenanigans and musical numbers.

The story focuses on Robin who, after seeing all major superheroes are starring in their own movies, is determined to get one for the Teen Titans. He and the rest of the group spend most of the film trying to convince big time movie director Jade (Kristen Bell) that they are not just sidekicks and deserve a spot on the big screen. She rejects them, saying they don’t even have their own nemesis and she wouldn’t hire them unless they were the last superheroes on earth. After experimenting with time travel, the Teen Titans discover that having no other superheroes is a bad idea and decide to go out in search of an arch nemesis. The Teen Titans find Slade and decide he’s the man for the job – mostly because his name is fun to say in a dramatic way and he looks just like Deadpool.

This movie is goofy – the Teen Titans break out into song any chance they can, and one song is even accompanied by a keytar playing white tiger in space (Michael Bolton). It’s full of famous actors: Nicolas Cage as Superman, Nicolas Cage’s son Kal-el Cage (yes he’s named after Superman) as young Bruce Wayne, Patton Oswalt as Atom, Jimmy Kimmel as Batman, and there’s even a very confused animated cameo by Stan Lee. There are DC comic book and movie references everywhere, including a jab at the Green Lantern movie “There was a Green Lantern movie… but we don’t talk about that.”

While I don’t personally believe Teen Titans Go! To the Movies competes with the other animated films released so far this year, it’s fun to watch and I think fans of the show will definitely get a kick out of this movie.