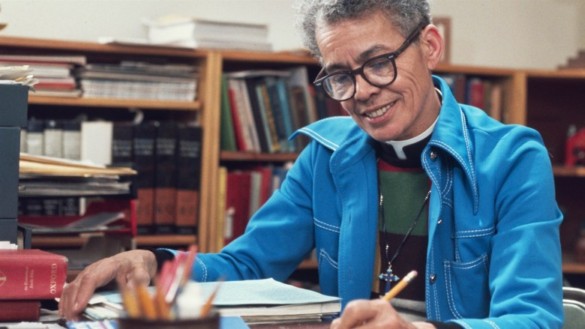 Synopsis: A look at the life and ideas of Pauli Murray, a non-binary Black lawyer, activist, and poet who influenced both Ruth Bader Ginsburg and Thurgood Marshall.

It is something that I am not proud to admit, but I was not aware of who Pauli Murray was before watching this film. I knew what sort of documentary I was getting myself into since the directors have previously worked on the Oscar-nominated RBG (2018), but I was interested to learn about the life of Murray and the work that they did decades ago. Safe to say, I was blown away by what I saw.

It is clear that Murray left behind a legacy from all of the work they did inside of the system. However, the most shocking thing that is presented by the documentary is about how few people knew about them. This is not like Ruth Bader Ginsburg, someone in the public eye that many would recognize and identify the progress she helped make in the US. Pauli Murray never fully got credit for the work that they did, and I hope many people get to learn the incredible stuff that they did do in shaping North America to be the way that it currently is to this day.

The documentary has a clear structure to it, making it extremely easy to follow. There are clear messages, some wonderful interview sequences, and follows the timeline of Murray’s life chronologically, speaking about many different issues. None of the issues felt unimportant to the story either, as each individual piece of information feels vital to Murray’s personal life and the years of power they did have to make a difference in the community. It really helped give someone like me who knew nothing about them a chance to learn and take all the information in, without ever feeling overwhelmed.

The primary issue that will stand out has to deal with racism. We have all heard numerous stories about the struggles that black people faced for decades in the US, and of people like Martin Luther King Jr. and Rosa Parks. However, it is clear from this documentary that is still so much more to learn as the story of Pauli Murray needs to be told more. The documentary presents the idea that American school systems need to improve their teachings of black history to the students, and the arguments for that are extremely compelling.

That is not the only form of representation that is given in this documentary, as this film also highlights the LGBTQ+ community and their need for equality. Whilst I am disappointed that so few people referred to Pauli Murray as they/them (with one particular interviewee pointing out that they believe Murray would have chosen those terms in this day and age), I am glad that the film is open about Murray’s beliefs and how she was a pioneer for the community back when it was deemed inappropriate. It makes you wonder how Murray would feel seeing the community today and the progress, albeit slow, that is being made to accept those in the community.

If there was something I would point out about this documentary, it is that it is incredibly short for the subject matter. Clocking in at a short 91 minutes, there is so much packed in there that some subject matters are only skimmed by. If this film was given room to breathe and allowed another 30 minutes to further expand on a few of the ideas and the impact that Murray has on today, it would have made for an even stronger documentary.

The main goal of a documentary is to inform, and that is exactly what My Name is Pauli Murray does. This is a person that deserves more recognition for everything that they did, and I can only hope that this documentary will help get their name out in the public more. You will certainly be on Google for hours after watching this one, and I could not recommend it any more than that.