Movie Review: ‘Straight Outta Compton’ Had Nothing New To Say 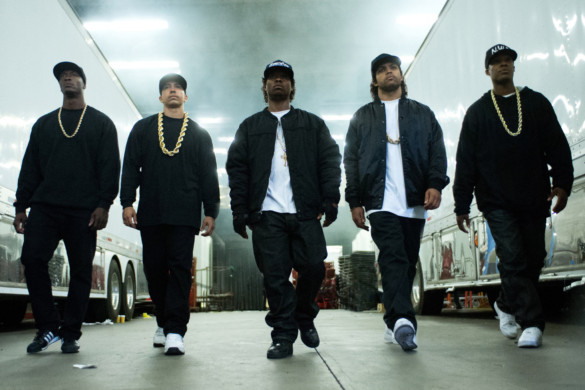 I suppose it’s a bad idea to start off a review of a film about a legendary rap group with the admission that I am completely averse to this genre of music. I can see all of the reasons why that admission would immediately turn people off the idea of reading this review. I know all of that and yet I realize that I can’t possibly talk about my issues with this film without acknowledging that I don’t see why everybody makes such a big fuss over N.W.A.

Most people who decided to watch this film, may have gone into it as fans of this group who were willing to accept the myths and legends that Ice Cube and Dr. Dre had cooked up. This is the sort of film that lionises its subjects and you can often sense the moments at which the real life figures decided to intervene and turn themselves into flawed, tragic heroes and not people who may need to take accountability for their mistakes. These are problems that are endemic to most of the musical biopics that have come out in the last few decades. I wasn’t surprised when any of those issues arose and I ended up with a watered down version of a potentially fascinating story about unchecked egos and the dangers of glamorizing the criminal lifestyle. If I happened to be a fan, none of these things really would have phased me. The idolatry of musicians can blind us to obvious flaws as we happily listen to the old hits being played.

The film follows the basic outline of most biopics. It centers on three enormously talented individuals who grew up facing rough living conditions. Eazy-E (Jason Mitchell) is depicted as a terrific singer who has enough capital to turn a fledgling band (known as N.W.A) into a musical group that is supported by a record label. He is joined by lyricist Ice Cube (O’Shea Jackson, Jr.), DJ and producer Dr. Dre (Corey Hawkins), and a bevy of others. They almost immediately experience great success when they release the album Straight Outta Compton. It attracts controversy for featuring several songs that are highly critical of law enforcement and the group becomes increasingly interested in commenting on social issues in their songs. Initially, the controversy brings them closer together but as fame takes hold, they begin to drift apart. Their ambitions turn out to be very different and they start to pursue different career paths.

The material for a decent first act is present, but it seems that the creators didn’t know where to go from there. Suddenly, the pacing suffers and everything strangely feels both rushed and slow moving. Flashy editing tricks are used to distract us from the fact that we have just zipped through plot details that deserve more serious, thorough examination. There is always the nagging sense that none of this is as intellectually nourishing as it should be.

Perhaps it’s similar to my experience of rap music itself. All bluster, loud line deliveries, and endorsements of morally questionable behaviour. There are times when I am  drawn in by the brash, confident personalities or the swagger with which the characters enter their tour bus but it never sustained my interest. F. Gary Gray directs this as though it is one long music video and that approach eventually wore me out. There is so much glitz and glam that you can’t quite slow down and appreciate any of it. It’s akin to consuming seventeen fried Mars bars and ending up with acid reflux in the moments after you have gobbled them down. It would be nicer to savor a smaller portion of chocolate ice cream and take your time appreciating the scent of the fudge swirls or the texture of the melted ice cream at the edge of the tub. That was a long, drawn-out metaphor for what this film could have been like if it did properly engage with some of its darker themes.

What if this had been about the way that the media was saturated with stories about real crimes in the 1990’s? It could have dissected the ways in which rap music helped to shift the focus away from the victims of these crimes and onto the enigmatic,  figures who perpetrated crimes. This would have rooted it more firmly in a specific time period and it would have allowed this film to be about more than the hero worship of these three men. It represents almost everything that I dislike about films that focus on real life figures.