Movie Review: ‘Star Wars: The Rise of Skywalker’ spreads closure and hope throughout the galaxy 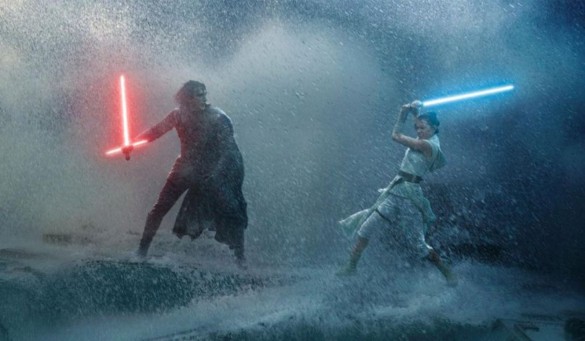 Synopsis: The Resistance faces the First Order once more in the final chapter of the Skywalker saga.

***This will be a spoiler-free review. For a full spoiler discussion, catch our Bonus Content episode coming soon. ***

From the moment you become a writer, you’re taught to cut the word “I” from your writing. With this word extermination, you have to come up with some way of making a voice shine throughout the piece you are writing. But many believe there are exceptions to the rule, especially when talking about a subject personally attached to the writer. So, when I was assigned this review of “Star Wars: The Rise of Skywalker,” caution was thrown to the wind, and I knew it would be something that I had to use. It’s because Star Wars is one of the most personal franchises in all of cinema, binding generations of people together to love something magical and profound. It’s the first film franchise I can remember falling in love with, with the rich worlds, in-depth characters, and enough memorable moments to keep me coming back for more.

But, throughout the last couple of years, the words Star and Wars have become as toxic of a topic as one can find. A fan base divided amongst themselves, throwing unobtainable expectations out left and right, seeming to be displeased with every choice made by the filmmakers. It makes for frustrating conversations, leading many, including myself, to feel like the magic of this franchise is dying. But while this may be the case, these movies are about hope, and how we should reflect hope into our world. We need optimistic films like this in the world, something where it brings joy back into our lives. So, when the credits began to roll, and the lights came up, I realized director J.J Abrams had given us the Star Wars movie we need right now.

“Star Wars: The Rise of Skywalker” picks up a year after the events of “The Last Jedi,” with Kylo Ren running The First Order, destroying any threating standing in his way. While he is doing this, our heroes, Rey, Finn, and Poe, are preparing for the final showdown with Kylo and his army. At the same time, both Rey and Kylo discover an old enemy is rising from the shadows, with plans for the two advisories and the entire galaxy. Mixed with exciting new characters and old favorites, our heroes must stop Kylo, The First Order, as well as the new lingering threat, to bring peace to the galaxy.

Though this movie packs many action set pieces, its character moments are what shines the most. With Rey and Kylo, we find comfort in the conclusion of their relationship, with both growing massively from when we first met them. For Rey, she discovers who she needs to be, confronting all her fears and wrapping them into a real personal transformation. By the end, we realized she is the hero we have always needed and the hero of our generation. With Kylo, he plays as the ultimate bookend to the entire Skywalker family, with an arc to rival his ancestors. Through this, we see the story of two come together as one with effortless performance and moving writing.

Along with these two, Finn, Poe, BB-8, Chewbacca, C-3PO, and many more have enough moments to leave you content with where they land. But “The Rise of Skywalker” highlights the most crucial character to conclude, General Leia Organa. Even though Carrie Fisher passed away a couple of years ago, she has a vital role, making her conclusion the real heart of the film next to Rey and Kylo. By bringing her back, “The Rise of Skywalker” delivers her a tribute she would be proud of, one fit for a princess.

I love the way “The Rise of Skywalker” leaves the saga, leading to the most stable position the franchise has been since “Return of the Jedi.” You make the case the movie did its job by getting to a “safe place” to end. But the film is more important than just a checklist to make sure everything runs to a good ending. It continues what the other entries accomplished, restoring my hope and faith in the Star Wars universe. The final shot could be considered an eye roll, but its the essence of this episodic storyline. We are always looking to the horizon, searching for answers to our problems. Star Wars has always been a place for wonder and optimism, putting us in a place to we can discover what is necessary to make a difference in our world. It’s why I cried throughout because “The Rise of Skywalker” is trying to earnestly unite us, not divide.

“The Rise of Skywalker” is a beautiful capper to not only just this new trilogy but the entire Skywalker saga. It is an action-adventure with tons of emotional pathos, leading the audience to a satisfying conclusion for all to love and enjoy. If this is the future for Star Wars films, I’d be happy and we should be so lucky.