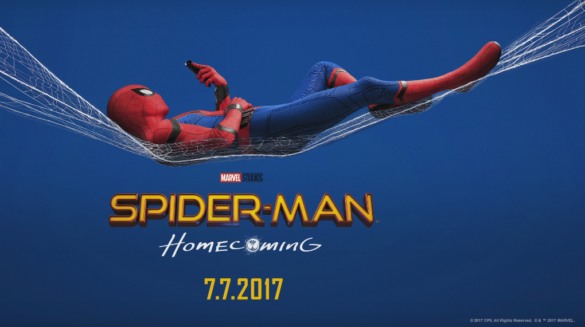 Synopsis: Several months after the events of Captain America: Civil War, Peter Parker, with the help of his mentor Tony Stark, tries to balance his life as an ordinary high school student in Queens, New York City while fighting crime as his superhero alter ego Spider-Man as a new threat, the Vulture, emerges.

Peter Parker, plucked from obscurity in Queens to assist ‘Team Stark’ in the Captain America: Civil War, finds himself sidelined after the battle of Frankfurt airport by Stark. Told to stand up for the little guy, our erstwhile superhero finds himself directing lost old ladies and beating up muggers, all the while feeling that he could do more. Overconfident as a superhero, he is the polar opposite at high school where he is the champion of the quiz team and shyly attracted to Liz, a popular girl on the same team and member of the Homecoming committee.

Spider-Man foils a bank robbery, which is performed with some slightly outlandish weaponry leading to the destruction of a local bodega, our hero begins to track the source of said weapons, leading him back to Adrian Toomes, a contractor who was kicked off the Chitari cleanup contracts and lost a lot of money. Toomes now uses an elaborate flying suit and Chitari technology to steal Chitari technology from Stark’s organization and continue his highly profitable weapon development and sales operation.

Tom Holland as Peter Parker is the core of the film and I am delighted to say he is quite excellent in the role. For the first time in any Spider-Man film, we have a teenage Spider-Man and the film does very well in making us feel that this guy is just a kid, and a somewhat weedy one at that. Looking small and uncomfortable whenever he is at school (yet curiously buff when stripping in and out of his outfit), he is frequently shown in long shot or against massive backdrops to highlight just how out of his depth he is in this world of superheroes. Charming, enthusiastic, hubristic, and flawed, Holland’s Spider-Man is a triumph of characterization, character and actor all combining to produce a winning cinematic creation. In a Marvel films so often there is little to no sense of peril, but this is different; we become genuinely concerned for Peter. We will him not to make some of the decisions he does and fear for his safety several times. It’s great.

As a foil to Spider-Man, we are blessed to have the ever-wonderful Michael Keaton as Adrian Toomes, aka Vulture. A disaffected American worker some of his speeches ring true in our own world as spoken from re-energized coal miners and laid-off US auto workers. He’s the embodiment of the American Dream, to set up your own business and grow it, laid low by big corporations stealing the lifeblood of small contractors, the contracts themselves. At one point Keaton growls that “the guys who created this mess now get paid to clean it up”. It’s hard not to sympathize with the character, and Keaton’s effortless charisma and superb performance really sell this villain as a believable creation. So long a weak-point in Marvel movies, Toombs is one of the best villains the franchise has created; threatening, charming, understandable, sympathetic, psychotic, driven, motivated. He is a fantastic character.

The rest of the cast are capable and fine in their roles, though the constant reappearances of Tony Stark starts to grate. I found myself yearning for a charismatic older actor playing the Uncle Ben/father figure role – one of the highlights of Sam Raimi’s film was Cliff Robertson’s performance. Stark is a blowhard, and it is hard to see him giving life-lessons to a kid when he basically created the whole situation in the first place. In fact Keaton mentions this discrepancy at one point.

You’ll be pleased to know that the action sequences are all very good indeed, a sequence on the Washington Monument being a standout (and in 3D this really delivers). Whenever Spider-Man is taking on three or four opponents in a medley of web shots, punches, kicks, flips, wall hangs and constant sarcastic commentary from the snarky kid in red and blue it is brilliantly entertaining.

So with all this positivity, why the less than top score? Well there are a couple of things.
Firstly the film overall feels quite flat. Despite the great work from the actors, the moments that are clearly meant to be humorous don’t always deliver – for example every scene with Jon Favreau’s Happy. Likewise some of the action sequences seem a bit, well, rote. They felt like TV sequences, something you’d see in Agents of SHIELD rather than a mega-budget movie. The worst offender being an elongated van chase. There is also un-neccessary sub-scenes and nods that didn’t quite fit with the characters or the story (or indeed the tone of the film), the final scene with Aunt May and the f-bomb I found really jarring. While I bring up Aunt May, I would have welcomed more scenes with Tomei and Holland, they had an easy chemistry, but we didn’t see enough of their relationship.

The other major problem with the film is the existence of Kick-Ass. Michael Vaughan’s uber-violent F-you to the superhero film clearly owes a great debt to Lee and Ditko’s creation, but it is hard to get the green-suited loser out of your head, especially when you see Spider-Man walking around the neighborhood using his powers on low-level muggers. The same sense of ‘don’t do this’ rattles through my brain in both films, both place their convincing teenagers into positions of great peril, and both deal with balancing school-life with superhero -life.

Unfortunately, due to the flat direction mentioned above, Kick-Ass is a superior film. The slight dips that Homecoming suffers from (the nerdy best friend is irritating, the love interest is a bit bland, all the humor falls flat, some of the action feels cheap, any plot twists are visible a mile away) Kick-Ass doesn’t.

However I fully understand that this is the film that Spider-Man fans have been waiting for, and it is as slick and enjoyable a film as Marvel has ever made. It is the first time Spider-Man is seen as he should be: as a kid. The film is very good indeed, the best Marvel film of the year, but this reviewer enjoyed Wonder Woman more. Don’t get me wrong, DC’s film cannot avoid some of the dunderheaded plotting that marred their other movies, a pothole Homecoming avoids admirably, but it was also energetic, propulsive, colorful, lively and, in one outstanding scene, tear-jerkingly heroic. Homecoming doesn’t quite engage the same emotions in this reviewer.

I’m really nitpicking though: Homecoming is a polished piece of entertainment, and well worth your money. It is particularly strong on its lead characters and the villain is the best I’ve yet seen in a Marvel film. If you are a Spider-Man fan, feel free to add a whole grade to the score above because this IS the definitive cinematic version of your beloved character.