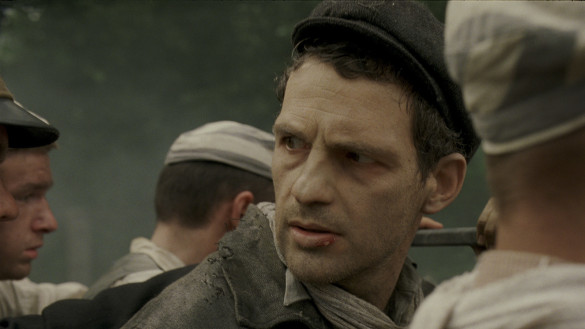 Synopsis: In the horror of 1944 Auschwitz, a prisoner forced to burn the corpses of his own people finds moral survival upon trying to salvage from the flames the body of a boy he takes for his son.

Son of Saul is a haunting and hypnotic view of a true story familiar to many. Due to this familiarity, this is a film that could’ve easily been bogged down in unnecessary exposition and world-building. It instead chooses to constrict its focus and narrative, and thus create a strictly singular view of an event many would like to forget ever occurred. It is a bold and brilliant move by the film’s director and leading actor, so much so that one would naturally assume this director had been making films for years. But get this, Son of Saul is from a first time director. Needless to say, this will go down as a special and important film of the Holocaust genre, and easily one of the most personal.

Son of Saul, written and directed by Laszlo Nemes, was the 2016 Oscar winner for Best Foreign Language Film (from Hungary). Its story is focused on that of one main individual named Saul, played by Geza Rohrig, a Jewish-Hungarian prisoner at Auschwitz. Saul and his fellow prisoners are members of the Sonderkommando, or “secret keepers”, those who are offered a “prolonged” life by leading other Jewish prisoners to their gas chambered deaths. These secret keepers are then forced to raid the clothes and belongings of the dead for their valuables, before finally cleaning up their bodily remains in arduous fashion.

And arduous is the right word to describe this film, yet Nemes never spends his time hammering his viewers with visually graphic details. The way Son of Saul is shot is a character in and of itself; Nemes chooses to film the entirety on this medium close-up shot of Saul himself, even further constricted by its narrower aspect ratio. Limiting the depth of field and exterior focus helps blind the viewer of the visual horror Saul is forced to carry out, and yet it surprisingly makes the film that much more frightening; not only does audience imagination play a huge factor, but the audience can then spend their focus on Saul himself, and his heartbreaking yet subtle reactions to the painful world around him.

None of this would work without Geza Rohrig’s mesmerizing performance. The greatest compliment you can give any actor is their ability to act with their eyes, a skill Rohrig delivers in spades here. His physical reactions are subtle, but they simultaneously state his physical and internal torment beautifully. The drama ensues when Saul encounters a young boy prisoner, killed by the gas chamber, whom Saul may or may not have a direct connection with. This puts Saul on a personal mission, driven by his own desires, yet never one-sided in its morals; Saul’s actions are indeed selfish and have dire consequences to those around him, but Rohrig’s performance makes known of a familial past that Saul may have lost, or perhaps wanted but never had. Familial lost in a time of great despair thus becomes one of the film’s central themes

But its themes don’t end there. Son of Saul continues to deal with the notions of survival’s guilt, religious faith, and how your actions and desires change when faced with an eventual yet certain death, but at any uncertain moment. And the moral ambiguity surrounding the film comes full circle in the film’s final sequence, one that finds a striking balance between harsh realism and uplifting catharsis; regardless, it is incredibly well earned. For how limited its visual scope is, Son of Saul is one of the richest and most personal of all Holocaust films, backed by a stunning central performance and realized by a filmmaker who has an incredibly bright future ahead of him.