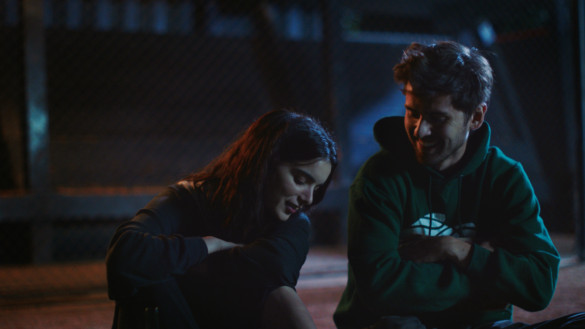 Synopsis: A lonely college freshman forges a strong connection with his resident assistant during a fraternity party

If someone told me that there is a movie called Shithouse that takes place at a college and is written by a 23-year-old man, I would immediately expect something in the vein of Animal House or Everybody Wants Some!! But alas, there is a film called Shithouse, and it’s actually about loneliness and finding your way in a new environment. The film is written and directed by Cooper Raiff, who also plays the lead role. It won the Grand Jury Prize for Narrative Feature at the 2020 South by Southwest Film Festival, giving the sense that this is a young filmmaker on the rise. It is undeniably an indie film, relying on heavy dialogue and the formation of its two primary characters rather than any spectacle.

Raiff’s main character is Alex, a freshman at an unnamed college in Los Angeles by way of Dallas. From the start, the film makes it clear that Alex is having a rough time. The closest he has to a true friend is his stuffed wolf, whom Alex has imaginary conversations within a humorous bit where subtitles are used to convey the inanimate animal’s speech. In addition to his loneliness, he bombs a test, gets locked out of his dorm room, fails to connect with anybody at a party (held at the titular house), and has to sleep on the couch on his floor after his roommate literally shits himself. And that’s all within the first twenty minutes of the movie.

Frankly, those early scenes remain the best in the entire film. Early on, it’s easy to feel Alex’s pain. I should declare that this may be because I found it relatable to my own experience in college. Transitioning from a loving home to a new place with all new faces is hard, especially for an introvert like Alex. The sadness he feels after he ends a phone call with his mother back in Dallas is palpable. Granted, it should be noted that this is just one portrayal of the difficulty new college students face, and it’s that of a white young man coming from a place of privilege. Still, these moments present a struggle that is not often highlighted in American college films.

Alex’s scuffles with this new life seem to be partially alleviated when he connects with his sophomore resident assistant (RA) Maggie, who is played by Dylan Gelula. To say the two immediately kick it off would not exactly be true, but their first awkward conversation leads to a hookup in her room. Though this doesn’t go exactly as they might have planned, the two then embark on a mini-adventure throughout the night. It turns out that Maggie has had a tough day as well, accented by the death of her beloved pet turtle. It’s Alex’s idea to dig the deceased pet out of the dumpster and give it a proper burial.

Along the way, Alex and Maggie converse about school, life, and their upbringing. While these conversations may at first seem somewhat profound once they get past the awkward stage, they’re actually quite superficial and unoriginal. Despite his father’s death years earlier, Alex came from a good home and a supportive family. Maggie hasn’t spoken to her father in 15 years, and she does not have a beneficial relationship with her mother. While this may help develop the characters to some degree, it feels like a basic step on the road to a more profound exploration. Unfortunately, it never really gets there.

As the film goes on, Raiff’s protagonist becomes less likable. He fails to understand that while the time he spent with Maggie was the beginning of a relationship for him, it was just another fun night for her. As a result, he lashes out and displays a form of toxicity that is never really addressed. To present these faults on their own is not a problem, but the ending of the film gives into this in an almost fantastical fashion, rather than inspecting it.

That being said, there are undoubtedly some substantial ideas throughout the film. As we spend more time with Alex, we discover that he has been on campus for over six months. This is significant, as the beginning of the film may create the idea that this is all new to him. In reality, his troubles have persisted for over a semester. The aforementioned stuffed wolf names Alex’s affliction best: “College sucks, but you’re also not trying.” Alex maintains the idea that everybody else on campus exists in a world separate from him. Thus, he refuses to give them a chance. His form of loneliness is quite different from Maggie’s. He feels isolated even when surrounded by people, with his depressed state keeping him from giving in and trying new things.

On the other hand, Maggie seems to feed off being around others. It provides her solace to cope with a crappy day. Their loneliness, though somewhat unalike, is what brings them together.

Though it doesn’t hit every target it aims at; Shithouse features a solid portrayal of the difficulty one faces in adjusting to a new life. The college campus is a perfect setting for that. As our two main characters discuss, it’s a place in which individuals seek to discover themselves and their identities. And though the identities of these characters could have been explored more, we are treated to affecting performances from both Raiff and Gelula. Above all else, it signals the arrival of a new, young filmmaker with intriguing ideas and room for growth.