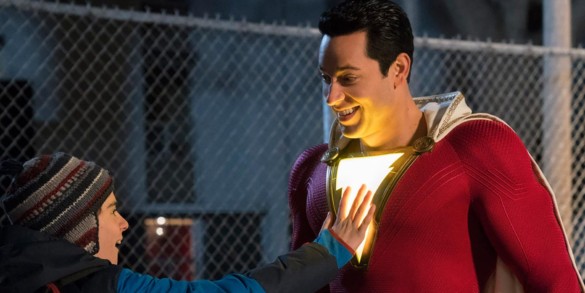 Synopsis: We all have a superhero inside us, it just takes a bit of magic to bring it out. In Billy Batson’s case, by shouting out one word – SHAZAM! – this streetwise fourteen-year-old foster kid can turn into the adult superhero Shazam.

Shazam! introduces us to another superhero and supporting characters from the DC universe. It’s both an origin story and a great coming-of-age film. While most DC films have been darker in nature, Shazam! is a fun and mostly kid appropriate movie. This change of style works for this character, but I’m not sure how he will fit in the bigger DC picture, or if they are even planning to do that in the future.

Shazam! tells the story of Billy Batson (Asher Angel); a teenage orphan with a habit for running away from foster families to search for his birth mother. Eventually he is placed with the idyllic Vazquez family and their other five foster kids- Freddy, Darla, Mary, Eugene, and Pedro. One day after an escape attempt, Billy ends up on the subway and is magically transported to a different realm. There he finds a wizard (Djimon Hounsou) who tells Billy he is the “chosen one” and needs his help to save the world from the evil Dr. Thaddeus Sivana (Mark Strong) and the seven deadly sins. The wizard transfers his powers to Billy, so now when he says the wizard’s name -Shazam!- he transforms into the buff, adult, red-costumed superhero (Zachary Levi).

My favorite thing about this movie is the relationship between Billy and his foster brother Freddy (played by the scene stealing Jack Dylan Grazer). At the beginning of the film Billy has trust issues and no desire to belong to a foster family. Freddy slowly wins him over with his crazy amount superhero knowledge, his loyalty, and his” never give up” attitude. Freddy is easily one of my favorite characters in the film. He stands out, even when sharing the screen with Zachary Levi and Mark Strong. He serves as a sort of wisecracking mentor to adult superhero Billy while he’s learning the extent of his powers and choosing a superhero name. I look forward to seeing him in more films. The other foster siblings are also good in their limited roles; I especially liked the video game obsessed Eugene, and the adorable little sister Darla.

Mark Strong is always good when cast in an antagonist role. I know he likes being the bad guy and always does the best with what he’s given. I wasn’t a huge fan of the other villains in this movie, The Seven Deadly Enemies of Man (Seven Deadly Sins), I feel like they weren’t represented well. Usually you can easily pick out which one is which sin, but in this case only Gluttony was obvious. In the comics they’re much easier to identify, so I’m not sure why they got this gargoyle-like redesign for the film.

Along with the fun origin story for our hero, we also get a great message about family. The film shows us that family isn’t necessarily what we’re born into, it’s who we choose to be with and who embraces us. It’s a great coming-of-age story for Billy as he grows up (emotionally and physically) as Shazam.

Overall, Shazam! is a fun movie with mature themes sprinkled in. It embraces the camp and humor this character needs to succeed on the big screen, even poking fun at previous DC heroes and films. There are great lead and supporting characters, some cameos, and even a funny scene stealing Santa. I’m not sure where Shazam will fit into the DCU, but I’m looking forward to more films. There are two post credits scenes so make sure to stay until the very end.