Movie Review: Dumbo is not the star of ‘Dumbo’ and that’s a big problem 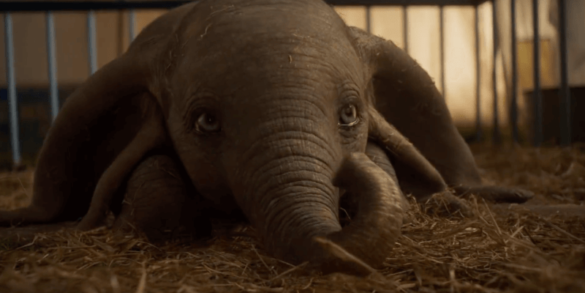 Synopsis: A young elephant, whose oversized ears enable him to fly, helps save a struggling circus, but when the circus plans a new venture, Dumbo and his friends discover dark secrets beneath its shiny veneer.

While the messages of friendship, heartbreak, and overcoming adversity resonate throughout Tim Burton’s Dumbo, the delivery system of such messages is cumbersome, ineffective, and to no one’s surprise, pointless.  This is to be our new norm. Disney will keep pumping out live-action remakes of their beloved animated classics until the box office dries up.  2019 alone has three such releases (four if you count the sequel to 2014’s Maleficent).  As Disney racks up talented directors to tackle these pictures, the hope is that the quality of the remakes will increase, therefore driving box office numbers.  Unfortunately, that correlation has not come to fruition. Tim Burton’s Dumbo is just another mediocre interpretation of previously tread material.

Dumbo, based on the 1941 animated film of the same name, maintains the same basic premise as its seventy-eight-year-old cousin. A baby elephant born with enormous ears discovers he can fly, thus saving the circus and his mother. In some cases, the original animated film is about as long as that previous sentence. Clocking in at sixty-three minutes, the original Dumbo doesn’t even tackle the topic of flight until around minute fifty-three.  The build up of the film reaches its climax with the discovery of his ability to fly, thus saving the things here ostensibly cares about (we don’t know, because Dumbo doesn’t talk). The episodic nature of the animated film made it feel whimsical and fun (all racist allusions aside). However, Tim Burton’s Dumbo feels like a five-hundred-pound elephant in the room that sits firm and never moves forward.

One key difference of the film vs. the original is that Burton uses the point of view of humans to tell Dumbo’s story. Cleverly, the 1941 film used the animals themselves to drive the story. Through the eyes of Dumbo and Timothy Q. Mouse, we witness the innerworkings of the circus through the translucent sides of a tent. In this way, Dumbo is separated from the humans, living in his own world with his own stakes. In the 2019 version, the story is mishandled by a group of characters that seem to be hyperbolic variations of the characters they are meant to play. Through these inefficient characters, Dumbo’s communications are announced to the point of exhaustion. Nothing is subtle with these interactions. Dumbo’s thoughts and feelings, though easily understood through context, are bludgeoned into the audience, even with the understanding that this is a children’s film. This insult of intelligence is unreconcilable. With that being said, there are many other faults that haunt this film.

The characters that inhabit this decidedly Burtonesque realm seem forced and each has an inexplicably terrible accent, which is all the more frustrating once one thinks of the career that Tim Burton has had directing some of the best actors in generations.  Michael Keaton’s pseudo-Disney is weak as a villain and his constantly changing accent is frustrating to say the least. Eva Green is magical but seems wedged into a story that doesn’t require her. Danny DeVito is a saving grace, but his comedic breaks are few and far between. Colin Farrell’s Holt Farrier is sad but unassuming and brings zero charm where there needs to be. The effects and sets of the film are subdued when compared to other Burton films. Although there is beauty in the set design, it still feels heavy and constructed and in no way ever seems to fit with the story.

As stated earlier, the story shares messages with the original, but is extremely incohesive and tries to do way too much with the material.  There are too many character arcs that need resolution. Dumbo is the star; let his story take the lead. However, the plot gets muddled down with human greed, loss, and arrogance. If Dumbo’s story was allowed to flourish, this version of Dumbo would have soared.  Unfortunately, the filmmakers cannot seem to get out of their own way and Dumbo crashes before it takes flight (which is about minute ten by the way).  In this way, all the wonder is lost and the magic is spent.