Movie Review: ‘Rocketman’ is a musical biopic we can be proud of 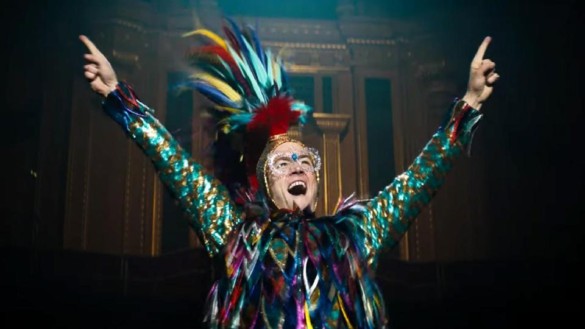 A warning to the reader of this review up front, I’m completely biased when it comes to Elton John. That’s right, I admit to my bias. It’s not hard to admit because Elton John’s music has been the soundtrack to my life, just like it was for my Dad when he was living in the late sixties to early seventies. Growing up, listening to his albums in my dad’s car as he took me to school, road trips, Friday nights at the house with my family, EJ catered to the musical needs of my childhood and continues to do it till this very day. From his Empty Sky album in 1969 to his Blue Moves album in 1976, he released some of the most iconic albums ever made and had stretch of music that can go down with anyone as the best of all time.

So it comes as no surprise when it was announced that there would be a film about his life and his music, I was skeptical as hell. I mean we are talking about an icon, a living legend, there was no way this was going to register for me as a good movie. And the concerns grew after seeing what happened last year with the abysmal film that Bohemian Rhapsody. I thought this film would fall down the same, safe, generic path of telling a rock stars’ life, one hit at a time. I worried that this wouldn’t capture the spirit of what Elton and his music represented, much like Freddie Mercury. And yet the trailer came out earlier in the year, and I realized, this film might have a chance of being half way descent. So I’m happy to report that after months from the drop of the trailer, and years of nervous thoughts of if it can’t be done swirling through my head, I can say that director Dexter Fletcher and his team have a musical biopic that we should be proud of.

The film is a look at the life of Sir Elton John (Taron Egerton), told through a musical, fantasy angle that blends the music that his lyricist/best friend Bernie Taupin and him created to make John one of the biggest, yet troubled music icons of all time. The film kicks off with us meeting him in a rehabilitation center, sitting around a circle, opening up for the first time about the mistakes or transgressions that landed him there. From that moment, we a transported back to his childhood, before he was Elton John, when he was Reginald Dwight, a young kid with two parents who couldn’t care anything about him and only cared about themselves. This leaves young Reggie on his own to survive, with just his gift for music to get him out of the life he was living, deprived of love. Once he grows up, he changes his name, finds Bernie, gets a record deal, meets his manager/lover John Reid (Richard Madden), and becomes the best-selling recording artist in the world. The problem is, he is taking all the drugs and drinking all the alcohol in the world to the point where his life starts falling apart.

Now I know what you are thinking, this sounds like many musical bio-pics before, and while the story seems familiar, it’s the way it is shown and told that feel so fresh for a story model that has become so rotten. The film is told in almost two different styles, fantasy musical and a serious drama of drug addiction. While this shouldn’t work because in every film of this genre, it works because Fletcher and his team put the time in giving your someone to care about. With big show stopping numbers to hits like “Bitch is Back”, “Saturday Nights Alright (For Fighting)” and the beautiful, dreamlike version of “Crocodile Rock” to shine a light on the younger days of John’s life to show the fun and high points. The first half of the film truly embraces the fantasy musical element of the film. But with the second part of the film, it slows down, just as the success and the relationships in his life are fading away and the songs like “Rocketman”, “Don’t Let the Sun Go Down on Me” and “Goodbye Yellow Brick Road” illustrate the pain and loneliness that we see in Elton as he sees everything that he built and those he cares for disappear.

Throughout all of these musical moments and dramatic tension, two things remain, the visual style of Fletcher and the best performance of Taron Edgerton’s career. Fletcher, who was brought Bohemian Rhapsody late in the filming process to do some reshoots and help edit the final product, actually shows his visual eye as a director and what it is like to have the confidence of a studio give you a massive project like this and bring it home. The scale he is dealing with is massive, with whole giant sets and long, ambitious dance numbers that we don’t see from studios in this day in age. Not only does he show that he can deliver a successful telling of Elton John’s life, he conducts one of the performances of the year out of Egerton. Egerton, who has been known mostly for his work in the Kingsman series, shines through and brings the icon to the big screen. There are moments that he looks and sounds just like and him and in no way is that for cheap effect. He brings real human emotion to the Elton we see, making you fully understand every emotion he feels and leaves you rooting for him at the end when he belts out “I’m Still Standing”, a scene in contention for one of the best scenes of the year so far.

I don’t think the film is perfect. I loved what they did with Bell’s Bernie, truly establishing their relationship in the film and giving them real human moments of heartache and character growth together as friends. But while I loved what they did with Bell, we needed to see more of Madden and Bryce Dallas Howard as Sheila Eileen, Elton’s mother. Also a lot of the timeline of his life, in terms of when songs were played and released in real life are off and it left me annoyed as a die-hard fan nitpicking the film as it played out. That being said, and the nitpicks aside, the film at the end of the day is not about the supporting characters or timelines of songs, it’s about Elton John and about him finding a reason to love again by the end. But while he is finding love and his true self by the end, we are left falling back in love with the rock icon and left impressed that such beautiful life can be brought to screen in such a respectful, pleasurable way.