Movie Review: ‘Robin Hood’ is a failure on many levels 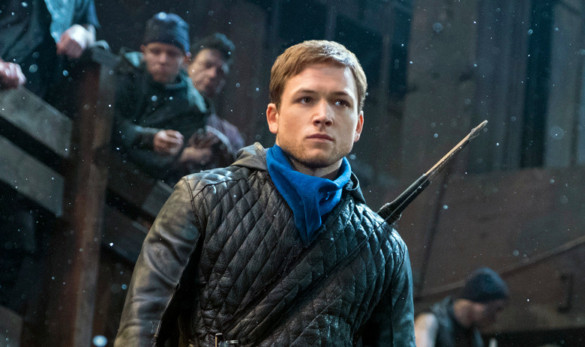 Synopsis: A war-hardened crusader Robin of Loxley and his Moorish commander mount a revolt against the corrupt Sheriff of Nottingham.

There have been dozens of Robin Hood movies over the years, the first being a silent, black and white film in 1908. Some of the more notable films are Errol Flynn’s The Adventures of Robin Hood (1938), Robin Hood: Prince of Thieves (1991) with Kevin Costner, Disney’s animated Robin Hood (1973), and Robin Hood: Men in Tights (1993) starring Cary Elwes. This latest version isn’t the best addition to the long list of Robin Hood films, but it’s probably not the worst either.

The plot of this Robin Hood doesn’t differ too much from most of its predecessors, other than to ditch the traditional role of Little John (Jamie Foxx) and morph him into Morgan Freeman’s character from Robin Hood: Prince of Thieves. Not sure why they did that, but he wasn’t the only “Merry Man” to get a backstory makeover. In general, it’s a predictable Robin Hood plot that should have been an easy, action packed, decently casted success, but it was ruined by its multitude of anachronisms, lack of character building, and wonky plot.

There have been a handful of period piece movies that have successfully included historically inaccurate elements. My favorite example is A Knight’s Tale (2001). It embraces its campy/fun vibe, includes modern music, and things that just would not have happened in medieval England, but somehow it works. Robin Hood, which clearly states it takes place during the Third Crusade (1189-1192), has so much historical weirdness that it is unforgivable. It can’t decide if it wants to be a real historical action movie or accept its fate as a bargain bin, popcorn flick. Some examples of historical inaccuracies that ruined the movie; things constructed with steel beams and rivets (an Industrial Revolution invention), medieval grenade launching crossbows, Call of Duty style Middle East warfare, a gambling party including roulette which wasn’t invented until 1655, an attempt at a motivational metaphor around the word “firedamp” which originated in 1662, etc. The costumes were also inaccurate but I’m usually okay with that when they are done tastefully. The hoodie style jacket Robin wears was a stretch but it kind of worked. I feel like this film would have been better off it they had tried a slightly modern take instead of setting it in the 12th century.

The anachronisms weren’t the only things wrong with this film. While some of the cast was decent, Marian (Eve Hewson) and Will Scarlet (Jamie Dornan) were flat and unlikable. I still haven’t decided if I liked Jamie Foxx in this yet. He wasn’t bad, he had a good mix of comedic relief and action moments, but I feel like they tried way to hard to make him Morgan Freeman. I also had an issue with some of the action sequences- one at the end where they blatantly ripped off one of my favorite heist movies, and the crusade street fighting that was pulled right from a first person shooter game or Black Hawk Down (2001).

This movie wasn’t entirely bad, I did like Taron Egerton as Robin Hood, even if he looked a little young. Ben Mendelsohn did his best with the script he was given to portray the evil Sheriff of Nottingham. I kept waiting for his character to get better, luckily he does get to show off his bad-guy skills towards the end of the film. Friar Tuck (Tim Minchin) was also a nice addition to the cast. I’m not sure what else I’ve seen him in, but he was probably the best character in the movie.

Another positive would be some of the action scenes. There were some slow-motion, fighting bits that could have easily been overdone but I think they were interesting and well edited. They also had a few fights that were up close and personal that gave me a Game of Thrones season six vibe.

Robin Hood is simply not a good movie. It would have probably been better off direct to Netflix or Amazon Prime. It has its moments where it is entertaining, but overall it’s a Guy Ritchie film wannabe, with a messy plot, that fails on many levels, and is only saved by Taron Egerton’s good looks and a snarky Friar Tuck.