Movie Review: Red 2 is a fun film with a great cast 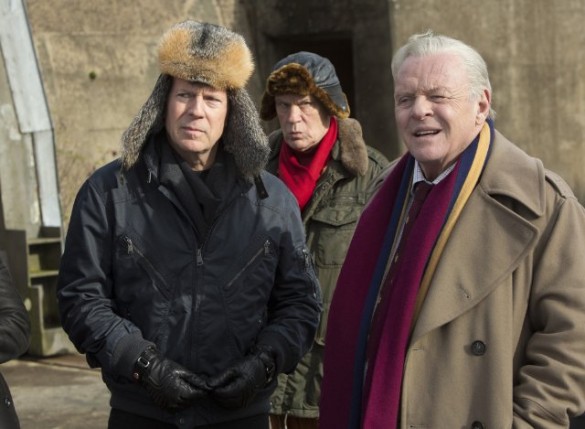 DIRECTION
It’s usually a scary thing when a sequel gets a different director than the original movie; but here, Dean Parisot did extremely well filling the shoes of Robert Schwentke. Then again, when you have the talents of John Malkovich, Anthony Hopkins, and the incredible Helen Mirren, along with a guy like Bruce Willis who pretty much plays the same character in every movie he’s in, you can pretty much spend your time focusing on the other duties of a director rather than worrying about the performances you’re getting from your actors. Perhaps the biggest casualty in this movie is Mary Louise Parker, who really could have benefited from better direction. While I immensely enjoyed this film, I have to admit that even though he came really close to matching the charm of the first movie, he didn’t quite get there. Take, for example, the shot from the first movie where Bruce Willis simply steps out of a spinning car. It was shot flawlessly. In this movie, there was a reverse of that shot where Bruce simply stepped into a spinning car. It just didn’t have the same pazazz as in the first film. About ¾ of the way through the movie, it’s almost as if Parisot forgot he was making a quirky graphic novel movie as the movie shifted it’s focus from the exploits of old RED agents, and turned into a full on action thriller.

SCRIPT
The Hoeber brothers, who also wrote the first movie, did a fantastic job writing this movie as well. They wrote this sequel exactly as a sequel should be written- they kept what worked from the first movie, expanded the world established in the first film, introduced interesting new characters, and took risks with existing characters. In this movie, we see Frank Moses (Willis) in the next phase of his relationship with Sarah Ross (Parker). It was fun to see this relationship progress as Sarah doesn’t want to just be the girl who gets sent to the safe house while Frank gets to have all the fun, but rather she wants to jump in and be part of the action, and suffice it to say, she gets the chance. Marvin and Victoria were written flawlessly and funnier than the in the first. And with the addition of Anthony Hopkins as a mad scientist, Catherine Zeta-Jones as a Russian operative and Frank’s past love interest, new conflict abounds which just makes for a great story. I did think, however, the addition of Byung-Hun Lee’s character was a bit unnecessary given everything else going on; it would have almost been better to save him for the third movie. But regardless, his character was a great add to this universe. In the end, the Hoebers gave us characters the we care about, a mission that is meaningful to us, and told a good story in a fun way. It’s no wonder these films have attracted so many of Hollywood’s elite.

PERFORMANCES
This is probably the area of the movie that is most inconsistent. What makes Bruce Willis Bruce Willis is that he’s always fun to watch in any role that has him blowing stuff up, shooting a gun, and throwing out quippy one-liners…you know, every movie he’s every been in. Mary Louise Parker had a much bigger role in this movie, and it suited the character well, but I think she could have used a bit more direction from director David Parisot. It was often hard to believe that she could fit into this world of Retired, Extremely Dangerous agents. She spent a good bit of the film in a love triangle with Bruce Willis’ and Catherine Zeta-Jones’ characters, and never felt like she should be able to hold Willis’ affections. Speaking of Zeta-Jones, her performance is probably the one I’m most disappointed with. I never really bought her character as a fast talking, Russian super agent. It came across like a child playing make believe in her big sister’s clothing and wigs. Byung Hun Lee, Neal McDonough, Brian Cox, and David Thewlis all turned in satisfying performances where you got the feeling they were having a lot of fun with this movie, but none stand out. However, it was John Malkovich, Anthony Hopkins, and the fabulous Helen Mirren who stole the show. Every scene they were in was lifted because of what they brought to the screen. The movie is worth it just to see these three playing these characters. And they are definitely the reason the grade on this section isn’t lower.

SCORE
When it comes to action films, Alan Silvestri is a name any director would be glad to have composing his score. With other films under his belt like The Avengers, The A-Team, both GI Joe’s, and even the original Judge Dredd, Silvestri can write music for explosions in his sleep. However, in the end, it seemed like he kinda phoned this one in. The themes were good, but forgettable. In the end, it will be the soundtrack to this film that people remember, not the score.

I love a good story. That’s why I love movies; especially when they tell me a good story and they tell it well. But when they don’t, I can be pretty vocal about it. The one thing that make up for a poorly told story- a lot of good laughs. Follow me on twitter @brentmulberry, or connect with me on Facebook.