Movie Review: ‘Ralph Breaks the Internet’ is a fun movie with wonderful messages 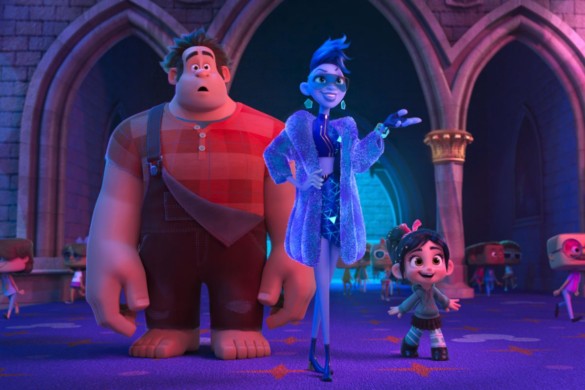 Synopsis: Six years after the events of “Wreck-It Ralph,” Ralph and Vanellope, now friends, discover a wi-fi router in their arcade, leading them into a new adventure.

Disney has been recently acquiring the rights to entertainment companies like Marvel, Lucasfilm, and soon Fox. This monopoly over a mass amount of pop culture and beloved fandoms has had a lot of people worried what Disney is going to do with them. Ralph Breaks the Internet is a fantastic example of what good came come of it.

This movie is packed full of references and easter eggs for all ages. I saw all my favorite Disney princesses, lolcats, Jason Mantzoukas, and references to video games I’d completely forgotten I had as a kid (Twisted Metal). I need to watch it at home, 5 feet from my tv, pressing pause every two seconds to find everything Disney threw in there. It follows our heroes from the first film, Ralph (John C. Reilly) and Vanellope (Sarah Silverman), as they explore the internet to save Vanellope’s game from being unplugged for good. During their adventures they encounter Ebay, Oh My Disney, Google, YouTube, Pinterest, ClickBait, Spam, and everything else you can imagine is on the internet and is appropriate for children.

The film includes many of the same characters from the first film and adds a handful of new ones. My favorites being Taraji P. Henson as Yesss the algorithm and Alan Tudyk as the search engine KnowsMore. Gal Gadot also makes an appearance as Shank – a character that reminds me of her role in the Fast and the Furious series. Most of the cameo roles are also voiced by their original actors. I loved how they managed to include so many well-known characters and pop culture references and the film was sill coherent and watchable. This movie could have easily turned into a gigantic, confusing, Disney mess.

Another positive for me were the messages embedded in the film. They managed to slip in tips on good internet behavior / etiquette while explaining about trolls and bullies. The overall theme was about being a good friend, feeling insecure, and how to not let that hold each other back. It was cute and well done. The animation techniques continue to amaze me. I watched the first movie about two hours before seeing the sequel and love the transition between retro and modern art styles. They continue that back and forth in this film with the added challenge of Pixar, classic Disney, and Marvel characters.

I can’t think of any negatives for this movie. The mass amount of advertisements, product placement, and references to other Disney characters might be a bit much for some. But that aspect of the film is made very clear in the trailers, so if you don’t like that sort of thing, then this movie probably isn’t for you… My stepdad who can’t stand animated movies, and has a specific distaste for Disney, actually saw this with me and laughed out loud many times. I don’t think he’ll admit to “liking” the movie but he will say it’s “not bad”.

Overall I think Ralph Breaks the Internet is a great film for kids and adults. It has a positive message, a wide array of nerd references to look for, and is genuinely fun to watch. It’s definitely another contender for Best Animated Feature so it will be interesting to see how that plays out this awards season. Until then, I will probably go see it again. If you choose to see it in theaters please, please stay until the very end of the credits.