Movie Review: ‘Puzzle’ is a charming remake but has some missing pieces 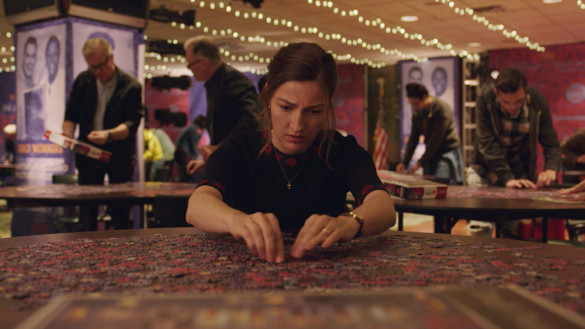 Synopsis: Agnes, taken for granted as a suburban mother, discovers a passion for solving jigsaw puzzles which unexpectedly draws her into a new world – where her life unfolds in ways she could never have imagined.

Puzzle is a 2018 remake of an Argentine film titled Rompecabezas (or translated from Spanish to English: Puzzle) originally directed by Natalia Smirnoff and released in 2010. Unfortunately the original I have not had the opportunity to watch yet so currently I am unable to draw comparisons between the two pieces of work. This newer version is directed by Marc Turtletaub, a new name for me, and essentially keeps the same story as the original. The plot centers around Agnes (Kelly MacDonald) a conventional stay at home mom who takes care of her family, attends church on a regular basis and is fixed in her daily routine and leading a very simple life. After receiving a jigsaw puzzle as a birthday gift she discovers something she both enjoys and has a talent for. This leads to a journey that has her redefining herself in new ways and having to cope with how her family reacts to the person she has become.

First off I am new to MacDonald’s work so I have no baseline but as far her performance in Puzzle she is magnificent. She is captivating as Agnes and is quite convincing as a woman who has simply fallen into the roles of dutiful wife and loving mother and even more convincing as one who goes through a powerful transformation. The film also provides adequate context for Agnes to make her character believable and allow the audience to connect with her plight in some way. But unfortunately this is where most of the praise for Puzzle ends. MacDonald has a quality supporting cast with Agnes’s husband Louie played well by David Denman and Irffan Khan as Robert a fellow lover of puzzles and a catalyst for the changes she goes through. Both men play important roles in Agnes’s life and Denman and Khan, in general, do a decent job in their roles but the writing for their characters is lacking. As the story unravels there is an expectation on the audience to accept certain aspects of their disposition but not enough complexity is provided to reach these conclusions. Although Agnes is the protagonist to fully accept her transition requires a certain amount of acceptance of how those around Agnes connect and respond to her. This proves difficult with Puzzle as the peripheral characters haven’t been properly fleshed out.

Additionally I found myself unable to buy into the relationship between Robert and Agnes. On paper I can see how these individuals could form a connection as they both feel a certain absence in their lives and the time the spend together can in ways feel intimate, but on-screen the chemistry between Khan and MacDonald is almost absent. After each encounter I questioned the direction that the film was going and based on the culmination of certain events it seemed apparent but I just didn’t buy it and frankly it felt forced. This may have something to do with the writing but Khan’s performance when interacting with Agnes was also off the mark. As the character of Robert I found him interesting and somewhat quirky yet gentlemanly, but the conversations with Agnes felt awkward and each encounter was so brief it was difficult to believe an intense connection could develop out of them. There is a moment in the film where Robert asks Agnes if he could kiss her and instead of it feeling sweet and endearing it came off clumsy and creepy. When it occurred I had no clue how Agnes felt about it and was confused on how the scene even lead into it.

Watching Puzzle can be a bit of a strange experience. The story is interesting and I wanted to follow along Agnes’s journey to see how it all played out. The messiness of the script aside I did feel for her character as Agnes is a person I am sure we all know in our lives. It is difficult to watch someone we care about float through their life unfulfilled especially when you can see they long for something more. Even more so a film like Puzzle makes you question your own life and look back at the decision you made and how they led you to where you are now. In this way Puzzle has something compelling to say and can be appreciated for the attempt. And again MacDonald’s performance is superb and she has such a powerful onscreen presence. Agnes can appear timid yet you can still sense this reservoir of strength under the surface. But aside from Agnes I spent most of the film confused regarding the remaining character intentions and actions. This is the case primarily with Louie and Robert, we get bits and pieces of their identities and but not enough depth. Their characters feel very hollow and play out on-screen like cliché’s placed there purely to tell Agnes’ story. By the film’s end I had no sense of who they were and didn’t buy into their actions. It’s disappointing because beneath it all I can see there is a good story to tell about how those around us fit into our lives and about self-discovery and the hidden possibilities we all harbor inside. But as it is Puzzle is too messy and patchy in its storytelling to recommend. On a positive note however it was a pleasure watching MacDonald perform and I do look forward to seeing her onscreen again.