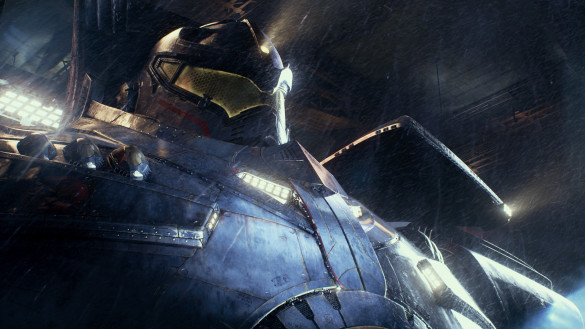 Synopsis: As a war between humankind and monstrous sea creatures wages on, a former pilot and a trainee are paired up to drive a seemingly obsolete special weapon in a desperate effort to save the world from the apocalypse.

DIRECTION
Pacific Rim is easily one of Guillermo del Toro’s best work and he brings to life an environment that is just incredible. The aesthetic is dropped on your lap in the first moments as the film opens with a montage of how the Kaiju (Japanese word for monsters) came to Earth and started to wreak havoc. The montage also went on to explain how the Jaeger (German word for hunter) program came to be so they could fight the Kaiju and save Earth. While the pacing was a little quick in the beginning, you get enough of a sense to know and believe in the world we’ve been introduced to and you get all of the information you need to understand what’s going on. And then it’s on. The fight scenes are incredible and breath-taking with amazing and gorgeous visuals that bring this world to life and it’s so much fun. The detail of the Jaegers and the Kaiju are incredible and so realistic, making it some of the best CGI out there. Simply, it’s bad-ass. While all the main battles take place at night, the night lights del Toro uses and the intentional neon lights used in the design of the creatures, make it very easy to follow along with what’s going on. However there’s more story here than you’d think in a movie like this; I mean c’mon, it’s del Toro we’re talking about. The drifting elements that combine the two Jaeger pilots create an amazing relationship dynamic that makes this movie standout. The two pilots have to become one to fight better and defeat the enemy and that concept is amazing. The exploration of it, while broad, was done really well and is a huge aspect to why this film is amazing. Del Toro’s musical choices is also incredible and I ‘ll get to that in a bit. Outside of the incredible visuals, del Toro is amazing with his camera work as usual. He places his camera in specific places to capture not only the fights, but the aesthetic of the cities we’re thrown into as well as the conversations we’re exposed to. If you walk out of this world and you don’t have fun, you may want to check your pulse.

SCRIPT
The story here is pretty good and original which makes this film unique and a lot of fun. However, Pacific Rim will struggle to find a big audience because of it though. The Kaiju have found a portal to the human world deep in the pacific and have started war to ravage and destroy the human race. To counter that, the countries of the world drop politics and come together to start the Jaeger program to save the planet, which is an interesting concept. We’re thrown into the Jaeger pretty quickly after we meet Charlie Hunnam’s character and his brother, who are Jaeger pilots and two of the world’s best. Without giving away spoilers, Hunnam is faced with some emotional baggage that he deals with throughout the movie and who could blame the guy? After awhile the Kaiju have evolved and start winning the war, which means the Jaeger program may be shut down. Other program attempts fail and it’s the Jaegers who have to come to the rescue. Charlie Day’s character, who is a Kaiju science expert, finds some information that helps the Jaeger program executives come up with a plan that is thought out well. Within all of that, we are exposed to some pretty interesting relationships, some explored and some not, and some come full circle in unexpected places. They bring emotion, for the most part, and Idris Elba character’s speech at the end of the film is moving and executed perfectly. While some of it may be cheesy, it’s expected for a film like this and the story comes together well given the fact we know what’s going to happen and how it will play out.

PERFORMANCES
The performances may be the weakest link of the whole movie but it doesn’t distract you from the main elements of the film. Charlie Hunnam won’t win any Oscars for his performance here but he’s believable enough that you care about him when he’s in the Jaeger, which is what matters. Hunnam doesn’t quite have the emotional bandwidth which is the main criticm of the movie as the lead character. You lose out an important element because while it’s written well, he doesn’t quite pull it out, but again, you get enough to not lose yourself with what he’s doing. His chemistry with Rinko Kikuchi however is a mixed bag which may take away from the film a little bit though. As his Jaeger partner, Kikuchi does a great job with her role as a fighter and someone who can “drift” with Hunnam’s character. The “romantic” relationship they have is not explored well and should of been left out. Charlie Day and Ron Perlman bring some great comic relief to the movie and while it’s all cheesed out, it adds some fun humor and is what’s needed in a film like this. The star, however, is Idris Elba. Man, is he an amazing actor and he brings it here as Stacker Pentecost. He’s the general for the Jaeger program and he’s a complete bad-ass. Every time he’s on screen, he elevates the movie and even the actors around him. The supporting cast such as Clifton Collins Jr. is pretty good, especially the relationship between Robert Kazinsky and Max Martini characters. I can’t even go into it without welling up a little bit, honestly.

SCORE
Holy Kaiju is Ramin Djawadi’s score amazing. His score is basically a rock band with a violin or two and it’s awesome. You hear lots of electric guitars and drums and it’s anything but traditional. It’s perfectly fitting to the aesthetic we’re thrown into and the main theme is a lot of fun. You hear the main theme several times throughout the film but it’s never overwhelming. It does have some orchestral elements and it’s blended in perfectly with the rock music to make for a very fun listen to in and out of the movie.