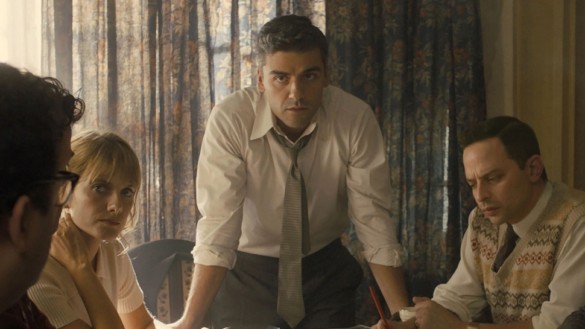 Synopsis: A team of secret agents set out to track down the Nazi officer who masterminded the Holocaust.

Chris Weitz’s Operation Finale is an engrossing look at the apprehension of Nazi war criminal Adolph Eichmann who was hiding in Argentina. While Matthew Orton’s script does take some poetic license concerning the details involving the safe house, the film’s narrative brought out the best in Oscar Issac (who plays Mossad agent Peter Malkin) and Oscar Winner Ben Kingsley (who plays the aforementioned Eichmann). The exchanges between Issac and Kingsley are simply marvelous as they go back forth during a good portion of the second and third acts of the film. However, those of you who plan on seeing the film, please don’t go in expecting some military-centric tale.  “Operation Finale” isn’t about the plan to snatch Eichmann (in fact that occurs towards the beginning of the film). Weitz’s film is about the psychological impact his apprehension had on Israel and the world.

The narrative of the film is relatively straightforward. Malkin (Issac) is a Mossad agent who has spent the better part of a few years tracking Nazi criminals and bringing them to justice. Sometimes, justice is delivered rather swiftly as they try and escape being captured. Israeli intelligence gets word of a possible location for Adolph Eichmann and can confirm that it is him rather quickly. A team of agents is then sent to Argentina to develop a plan to take him back to Israel where he will stand trial. They quickly realize that capturing a Nazi is easy but getting to a plane is proving to be somewhat tricky.

Operation Finale does strike some of the same notes found in Argo. A portion of the film is dedicated to Israel’s governmental bureaucracy which does slow down the pace of the piece. Operation Finale works when the focus is placed on the trauma rife throughout the Jewish community because of World War II. There wasn’t one person on that team of Mossad agents who didn’t want to put a bullet in Eichmann’s head. However, they had to show restraint or risk stooping to the level of their former oppressors.

Would have liked to have seen more instances of this conflict in the film. The only time that struggle was on display was when Malkin and Eichmann were in the same room. Kingsley was perfect playing the former high ranking Nazi Officer. He portrayed the infamous Nazi Officer as this seething, boiling cauldron of hate. While in hiding he’s had to repress who he is so he won’t draw attention to himself. Eichmann’s ego won’t allow him to be at peace with this. In his mind, he should be able to do as he wants. It’s not until he’s being interrogated at the safe house by Mossad agents that we get a glimpse of what made him a monster.

Issac is strong as Malkin, but one can’t help but wonder if there weren’t better options to play the infamous Mossad agent. Kingsley’s performance was magnificent. Alexander Desplat’s score hit all the right notes reflecting the pain of the Jewish community and their thirst for healing. Javier Aguirresarobe’s cinematography was effective but indeed could have been used more to heighten the tension of the piece.

Overall, Operation Finale is a fine film which easily could have been breathtaking. Needless exposition and the narrative going in odd directions (did we need to know more about Finkle’s ex-girlfriend?) really detracted from the overall quality of the piece. Should everyone see it? Yeah, Kingsley’s performance is well worth the price of admission.