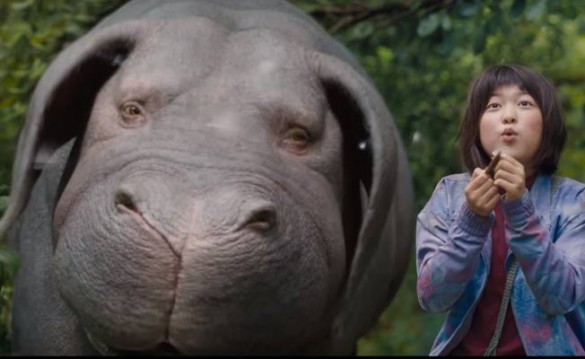 Synopsis: Meet Mija, a young girl who risks everything to prevent a powerful, multi-national company from kidnapping her best friend – a fascinating animal named Okja.

Okja is a beautiful, heartfelt tale and another smash hit for Netlfix. With brilliant direction from Bong Joon-Ho, an absolutely stellar ensemble cast and a film that is clearly filled with a lot of heart and soul, Okja is a unique glimpse into the modern world. Proving to be not only socially relevant but also emotionally challenging, this film will make you even question some of your own beliefs.

Taking place in an altered version of our modern reality, the company Mirando has devised a devious plan to sell food to their consumers. Advertising it as non-GMO, completely organic and all the other white lies that current corporations offer up, Mirando claims to raise 26 super pigs that are guaranteed to basically end world hunger while simultaneously satisfying their consumers. What they aren’t telling everyone is that they are practically creating every one of these super pigs in a lab and slaughtering them to produce a mass food product. However since they sent out the 26 super pigs, to keep up their public image, they must now round up all of these pigs. This includes stealing Mija’s best friend, Okja, an adorable super pig who is also her best friend. After stealing her pig, Mija must fight desperately to get Okja back through the help of animal friendly freedom fighters.

The plot for Okja remains relatively simple and easy to keep up with since it feels so familiar. Not familiar in the sense of we’ve seen this in a film before but that we are actually living this reality. We are in this world of corporations consistently lying to us about the products they are selling and how they either craft or obtain said product. The film is such a topical and intelligent glimpse into our own reality that its almost terrifying just how accurate it is. Bong Joon-Ho not only perfectly exemplifies this american corporation problem but he also gives us a catalyst for how we should be feeling about said issue.

Through the main character of Mija and the relationship she has with Okja, we get a glimpse into the thought process we should be having. The two have a deep friendship that we as an audience connect with on a deep emotional level. But the dedication Mija has to rescuing Okja, the innocence Mija has in terms of her exposure to corporations all fits this puzzle of how we should feel in our own lives. We are living in this fabricated world that Bong Joon-Ho has created and he gives us the clear straight cut answer for how we should react to our own world. The subtext that is so clear cut in this film is sheer genius and further proves what an incredible director Bong Joon-Ho is.

Another thing that he does so effectively as a director is his use of the ensemble. He proved his mastery of this approach in Memories of Murder in 2003, and he is continuing to execute on this talent to this day. Every character plays a part in the bigger picture, not only the adorable pig that is Okja, but the twisted CEO that is Tilda Swinton, the bubbly yet simultaneously poignant Jake Gyllenhaal, and the freedom fighter leader Paul Dano, and of course the heart and soul of the film, Seo-Hyun Ahn. Each character is their own piece of the puzzle, each one of them fitting perfectly into the grand scheme. Bong Joon-Ho knows how to perfectly make each character possess a specific trope or ability and then use to the advantage of the overall film. For example, Swinton is the dirty, rotten CEO, Gyllenhaal is the yes man who is regretful, Dano is the voice of reason and voice of hope, and Ahn the heart and soul of the entire puzzle.

Okja is a heartfelt, beautifully crafted film that will make you feel every emotion under the sun. With a beautiful visual style, a stunning score and brilliant direction from Bong Joon-Ho, this film is not worth missing. The only disappointing thing about Okja is that most of us will not be able to experience it on the big screen. With a brilliant ensemble cast and a perfect glimpse into our own reality, Okja is easily one of the smartest and greatest films of 2017.