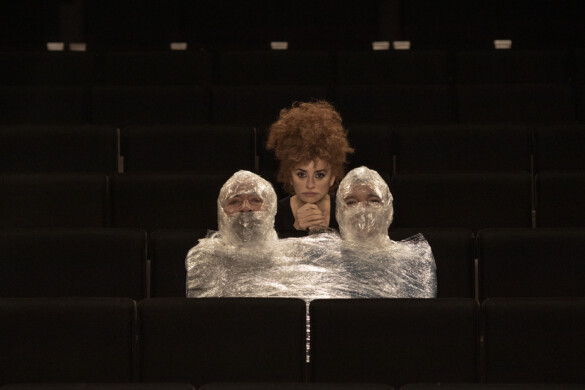 Official Competition is a hilarious satire that showcases actors and directors’ self-importance and arrogance through well-executed comedic set pieces and fiery performances by its leading trio.

Arrogance and ego are hard things to deal with when you are working in the vast medium of the visual arts, whether it be writers, directing, producers, or actors. There are many creators and artists that are basking in pretentiousness for no particular reason, just to seem wise and savvy in front of the audience watching. Some have the work to back it up, while others not so much. However, that doesn’t excuse their behavior. So why do they act in that fashion? One possibility may be to resolve their mentally, and emotionally distressing questions of “how do people see me” and “how will they remember me”. It’s a question that causes stress and existential angst to many in the industry since most want their name up in the stars. Nonetheless, I think most people will end up questioning themselves about those same concerns, even if we don’t have big names like filmmakers or actors.

That’s how directing duo Gastón Duprat and Mariano Cohn’s latest film, the absurdist satire Official Competition, begins. A pharmaceutical industry millionaire named Humberto (José Luis Gómez) celebrates his 80th birthday. Well… sort of. He’s mostly reflecting on his legacy and moping about what will be his next move. Humberto wants to have his name on the books – mentioned with the likes of Rockefeller or Vanderbilt. He has everything in the world in the palm of his hands, and he could make anything happen, yet he feels like it isn’t sufficient. One of the film’s first shots is a pile of birthday presents stacked up, one on top of the other, ranging from a signed soccer jersey to a rifle, yet he still seems unhappy. Humberto wants to create something that will last forever. Thanks to his wealth, something of the sort is achievable. He decides to finance a film, as he says: “I want to be the maker. So that people know I’m behind it.”

He sets up his team and disappears into the background. The rest of the story revolves around the crew he has chosen: Palme d’Or-winning director Lola Cuevas (Penélope Cruz, who has a great wig with red curls, just like Alma Har’el), Volpi Cup-winner Félix Rivero (Antonio Banderas), and method actor Iván Torres (Oscar Martínez). A lot of money has been spent getting the rights for the Nobel Prize-winning novel Rivalry, so it’s up to the trio of majestic talent to deliver so that it is a success. Through Cuevas’ different bonding and rehearsals methods, which may vary from destroying their own trophies (Golden Globe, Golden Bear, Premios Max, etc) to berating each other until one laughs or breaks out in anger, the audience gets to know what each of these characters represents in the current state of cinema.

There’s the director who will stop at nothing to get the performances she wants, the actor who wins all of the awards and has a massive ego because of it, and the classic method actor, who’s relatively restrained from all of the ludicrous shenanigans he is put through, albeit pompous to the core. You have three different, satirically exaggerated, sides of some of cinema’s most arrogant and self-centered people. The prosopopeia of such personas is meant to cause a stir and mock them. And, much to my initial surprise, it’s compelling from beginning to end. This type of satire is hard to manage, mainly because they can quickly switch gears and cause your emotions to switch from laughter to annoyance. There are a fair share of successful pictures that criticize the industry in different decades with great mockery and irony, like Robert Altman’s The Player and Preston Sturges’ Sullivan’s Travels. However, to equal measure, there are ones that don’t (For Your Consideration, 2006).

Gastón Duprat and Mariano Cohn’s direction in the several satirical set-pieces has the right amount of clever irony to be long-standing. Unfortunately, some of its quips are treated like running gags (the mime-like appearances by Irene Escolar, which includes a Tik-Tok dance sequence, and the talk about awards and creating a masterpiece), which hurt the viewing experience a bit. Nevertheless, its screenplay has enough comedic heft to be contained as such. It all adds to the theme of industry people having enormous egos. Still, some could have been managed differently – I did enjoy Escolar’s brief appearances, as I think she’s a fascinating actress. But, like most modern satires, it starts to run out of steam once it reaches the halfway point. The directors don’t seem to perfectly align the dramatic scenes with the sly gimmicks. Nevertheless, the directors manage to pick it up in its last act as its ending is hilarious and unexpected.

It would catch you off guard, even if it was slightly foreshadowed by the description of the novel when you think about it afterward. It’s a good way to end this rivalrous narrative because it showcases that the acting world is a dog-eat-dog one – a place where there is space for everyone, but nobody treats it like such. Everyone just puts on a mask during moments where they are supposed to “bond” or connect with one another, yet their own arrogance and self-importance get the better of them. But, of course, this is a satire, and it doesn’t reflect the true-to-life connections other people may have in that industry. However, from the various stories and articles that arise from time to time, you could say that something of the sort is always at the table. Even when Official Competition starts to feel like it’s slowing down for a couple of short segments, Duprat and Cohn manage to engage you by throwing well-executed comedic set pieces.

There have been many comparisons with Ruben Ostlund’s Palme d’Or-winning The Square due to dealing with a specific art form and trying to reinvent it through existential questioning. The comparisons are acceptable up to a certain point. But unlike Ostlund’s feature, Official Competition doesn’t have an imperative social commentary on the critiqued craft. Yet, it does have some fiery performances by its leading trio, just like Claes Bang, Terry Notary, Elisabeth Moss, and Annica Liljeblad did in the aforementioned film. Oscar Martínez and Antonio Banderas have great chemistry that showcases their rivalry and the fake versus real bonding moments. Meanwhile, Penélope Cruz acts like the outrageous medium between the two, in a way that you just want to see what crazy stunt she pulls next. These are actors and directors who love and care deeply about their work, even if their ego gets the better of them for a large part of their respective careers.

Yet, what’s fascinating about Official Competition, is that it also shows a sense of fondness for all three. We know, and on the inside, they know as well, that they would be struggling if it wasn’t for cinema. And the film treats them in a way that, although they might be ridiculous and egocentric, they also want this to work out one way or another. After seeing a clip of Cruz flossing, I went into this film with low expectations, but it managed to exceed them, even if it doesn’t have something to say that has great heft. It’s tightly constructed, and its sharp, witty script elevates the already fascinating and dedicated performances. Official Competition is a fiery satire and one of the funniest films I have seen this year so far.