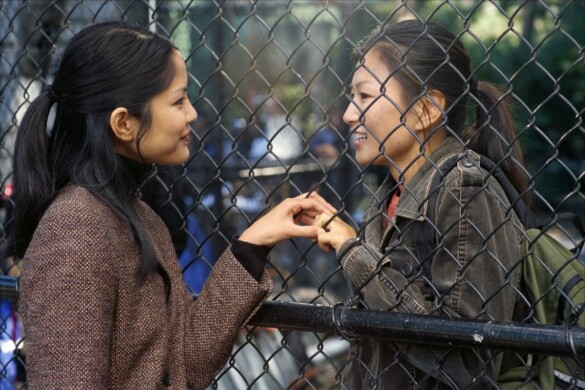 The Criterion Channel has a certain reputation. With a few exceptions, most movies in their original collection can be described as classics (if you’re being a kind cinephile) or pretentious (if you want to be a jerk about it). But the streaming service is different, or at least can be. Because of the large number of movies being added to and removed constantly, there is a much greater variety. As a matter of fact, some movies (like recently, Yentl) that have been covered here when they are exiting the service, are now back! But the point is really that even if you find movies in the collection a little too rich for your blood, with a bit of searching, you can find accessible delights. One of these is a romantic comedy that most have missed, Alice Wu’s lovely Saving Face.

Saving Face features the story of Wilhelmina Ping (Michelle Krusiec), who goes by Wil. Wil is a young Chinese-American woman who struggles through the normal ups and downs of young life; job stress (she is a doctor), difficulty relating to her mother, social awkwardness, and girl trouble. I think some viewers might feel that a lesbian rom-com focused on Asian-Americans might be limiting or unrelatable (see horrific reviews of Pixar’s Seeing Red for examples of this nonsense), but frankly, the opposite is true. Saving Face is one of the most connected, relatable romantic comedies I have seen in years. My only regret is not seeing it sooner.

Anyone who has ever had a challenging relationship with their mother, especially combined with a stuttered coming-out story, will feel deeply for Wil almost immediately. To add to the chaos, Wil’s mother, Hwei-Lan Go (Joan Chen), years after the death of her husband is suddenly, mysteriously pregnant. This has caused great upset in their small, relatively insular (read: gossipy) community. Chen’s reserve, combined with slight moments where her mask slips, makes for a stunning portrayal that is equal parts hilarious, heartbreaking, and, in moments, enraging. Wu’s choices to keep her camera tight on the faces of her actors in arguments and misunderstandings borders on uncomfortable and evokes memories of difficult conversations with our own family members.

Due to these moments, forced by Ma moving in with Wil, it is easy to forget that Saving Face is a pure romantic comedy at heart. Wil “meets” Vivian (Lynn Chen) at “Planet China”, a gathering at a local restaurant designed to set her up with men. But the two immediately connect and we become aware that Wil defended Vivian from bullies as a child before sharing their first kiss (and immediately running away). This becomes a common theme through the beginning of their actual romantic relationship, with Wil being terrified to come out and proclaim their love to anyone, let alone her mother, who knows that her daughter is gay, but still wishes for her to be married as it reflects upon her own worth as a mother.

The scenes between Wil and Vivian are sweet, but that is not what makes them truly work. The genuineness and intimacy between them nearly warms the screen and we instantly root for them. As is the hallmark of great movie romances, even when they fight, we understand both sides completely. Yes, Wil should be honest with the world both about their relationship and who she truly is, but her difficulty is both understandable and felt. And conversely, Vivian’s need to be desired and shown to Wil’s world is possibly the oldest romantic story, but that is for good reason. This is a testament to both actresses’ work, but especially Lynn Chen.

As she is not the protagonist of our story, she must be wildly efficient and effective in each moment. We have to understand her wants, her relationship with her father, and her motivations regarding her career; all while building a romantic relationship that can stand the test of disapproval and fear of the unknown. But she manages this, seemingly without effort, which, of course, takes a great deal of said effort. Wu, as a director, really shines in the small, loving moments between Wil and Vivian. Their scenes together are sexy without being overly sexualized, and this is owed to specific angles chosen by Wu, as well as the script (also written by Wu) which favors moments of giddy joy, paired with difficult conversations about the future.

It should not be surprising, given the possible convolution of plot mechanics involving Hwei-Lan Go, that hilarity ensues at the climax of the film. But possibly the greatest gift of Saving Face is that it continues past this point. After we find out the father of the child, credits do not roll. After Wil’s declaration of love (at an airport, of course), the credits still do not roll. There is happiness to be found, but our characters must work for it. They must grow past their awkwardness and their ignorance. The romantic comedy has long been maligned for being over the top and unrealistic. Saving Face never suffers from this. Wu’s characters feel real and true, and I am glad to have gotten to know them.