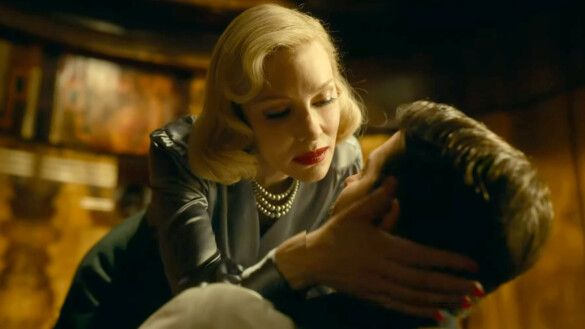 Director: Guillermo del Toro
Writers: Guillermo del Toro and Kim Morgan, based on the novel by William Lindsay Greshem
Stars: Bradley Cooper, Cate Blanchett, Rooney Mara, Toni Collette, David Straithairn, Willem Dafoe, Richard Jenkins
Synopsis: A mysterious man escaping from his past finds a job working for a traveling freak show and discovers his talent as a con man, but his ambition and greed take him down a dangerous path.

The world is finally warming up to Guillermo del Toro. Once viewed as the least accessible of the trio of award-winning Mexican directors who have dominated the Oscar circuit the last decade—along with Alfonso Cuaron and Alejandro G. Inarritu–del Toro’s films found a passionate fan base but struggled for mainstream appeal, due to the his penchant for the dark and mystical. Having created his own subgenre of horror, one that revels in the beauty of the macabre, del Toro found a niche audience with films like Hellboy, Pan’s Labyrinth, and Crimson Peak; which solidified del Toro as a master, if still unappreciated, filmmaker. But then came The Shape of Water in 2017, which was just accessible enough to win Best Picture at the Oscars, but still found a way to stay true to del Toro’s signature vision and literal creature comforts.

The Shape of Water was the perfect del Toro film to break through, as it feels as if it is the most personal, a love letter to the creatures that del Toro holds close to his heart. The beings that live in the darkness, misunderstood and feared by the world. These freakish shadow-dwellers are del Toro’s muse, and they again take center stage in his latest film, his first since The Shape of Water. Nightmare Alley is not only the perfect Guillermo del Toro film, but it proves that the director deserves to be in the same conversation with all the great artists working today, regardless of genre.

Nightmare Alley sets itself in the world of the traveling freak shows that meandered their way across America in the ‘40s. Based on the 1946 novel by William Lindsay, the story centers on a mysterious stranger, named Stan (Bradley Cooper), who wanders into the carnival and quickly finds work, first as muscle, helping break down and build up the tents as the show moves from town to town, but then as an assistant to one of the show attractions, Zeena (Toni Collette), the mentalist. Stan is a fast learner and quickly picks up Zeena’s tricks, but when Zeena balks at Stan’s efforts to push the act beyond just a simple con, Stan teams up with Molly (Rooney Mara), a naïve girl who has her own act. Soon, Stan and Molly find success with their own show, faking the ability to read people’s minds. Soon Stan’s ambitions lead him to leave the carnival, and he talks Molly into going out on their own, where they become incredibly successful performing their act for rich people, who are all too willing to be unknowingly swindled by their act. When Stan runs across a skeptic in the crowd, psychiatrist Lilith Ritter (Cate Blanchett), she invites Stan to join her in playing a complicated ruse on a very rich man who is desperate to believe that Stan can put him in touch with his recently dead son. Despite Zeena’s warnings to Stan that it’s dangerous to get involved with such intensely dark desires that deal with the occult, Stan’s ambition, greed, and ego lead him down a twisted and deadly path.

While the world of freak shows has been dramatized many times before, most recently in the fourth season of the acclaimed FX series, American Horror Story, it really hadn’t been done properly until now. In del Toro’s hands, the world of the traveling freak show finds all of its horror, pathos, sadness, loneliness, hope, kindness, camaraderie, and love—and is absolutely gorgeous along the way. No film this year looks better, and that’s saying a lot in the same year with The Tragedy of Macbeth and Cyrano.

From the opening shot, del Toro establishes this film as a visual masterpiece, as cinematographer Dan Laustsen and production designer Tamara Deverell bring us into the tents, at night, in the rain—the air is so heavy you can almost feel it. The world of the freak show is colored by characters and sideshows, con men, and creatures, the macabre and the naïve, the desperate and the pathetic. Every design element is perfectly rendered to bring every aspect to life, a bleak but sumptuous portrait of decay. Then, in the second half of the film, when the story moves from the mud to the penthouse, the design elements punctuate the story’s sinister intents, a wolf in sheep’s clothing. Every shot is a mastery of light and dark, mysterious and alluring, no inch of screen wasted.

It is easy to get lost in the beauty of this film, which helps to distract from the story that, although compelling, takes way too long to unspool. The two-and-a-half hour run time works against the film, which could have should have been tightened way up and been even more effective.

As for the performances, Bradley Cooper does some of the best work he’s done in years, but he still tries way too hard, while Rooney Mara makes it all look so easy. Cate Blanchett is excellent, as always, although not given nearly enough room to explore her character. Some of the best actors in the film are given far too little screen time, especially considering the run time. Willem Dafoe is eerily good as the carnival barker, David Strathairn is heartbreaking as the tired grifter trying to escape into a bottle, and Toni Collette is underused but glorious as Stan’s prophetic mentor. And don’t sleep on Mary Steenburgen, who chillingly delivers with panache in one of the best WTF moments of the year.

Overall, despite the long running time and Bradley Cooper’s continued desperation to be taken way too seriously as an actor, Nightmare Alley is by far Guillermo del Toro’s best film, a gorgeous movie with an engaging story, interesting characters, and an ensemble of actors who make the most of whatever screen time they have. It is by far del Toro’s most complete and compelling screenplay, which not only tells a tale, but invites a lesson to be learned. The most important lesson to be learned with Nightmare Alley, however, is that Guillermo del Toro is a freak of nature in his own right, a brilliant sorcerer of mood, light, shadow and soul.