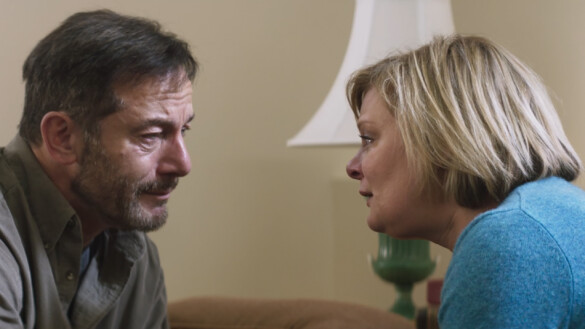 What does it mean to be nominated for Best Picture? The year’s best. The cream of the crop. The top of the heap. It’s a distinction that will follow your film around until the end of time. What if I told you this year’s recognition belongs to no other than indie drama, Mass? Upon its arrival at Sundance this year, Mass came out of nowhere leaving audience members speechless. A film that deeply examines the question, how does a mass shooting affect the victims’ families? When the last ones are laid to rest, and coverage has faded in the media, what happens next, because the family’s grief does not end there. Like most indies, there’s no gimmicks or flashy CGI. It uses storytelling to reel you in—shot only in the quiet emptiness of a single room. And while some filmmakers may see a need to go beyond the four walls of that room, it works here—it almost needs to stay here.

Writer and director Fran Kranz creates something special with Mass as he goes outside the scope of what we generally see after such horrific events to show us a meeting between two couples. Both couples have lost their children: one child was killed and one child was the shooter. Kranz’s original script is powerful and one of the best written scripts I’ve seen in years. It hits hard and doesn’t give you much time to breathe. The film encompasses a multitude of layers to create such a complex story. Kranz makes you feel everything these people are feeling; their pain, grief, and anger. You’re a fly on the wall, viewing something that you shouldn’t. So when the performances explode on screen, it makes it so much harder to divert your eyes away from the commotion.

Each character faces their own obstacle that they must work through in order to achieve peace or forgiveness. Martha Plimpton, Ann Dowd, Jason Isaacs, and Reed Birney come to this table to unleash a perfection of talents—a true ensemble at work. The dynamics with one another feel real, organic, and never forced. It’s a battle of words and questions trying to get at the root of what happened, and how it could have been avoided. The characters are so multidimensional that if you were to see Mass again and again, more of the smallest details would continue to come to light. The rise and falls, the strengths and weaknesses are so brilliantly displayed on screen.

This may not only be a plea for Mass to be recognized in the Best Picture category, but rather everything that it encompasses. Truthfully, we as movie lovers scream for originality and creativity when it comes to the movies we see. No longer do we want to be stuck in the sludge of monotony that has plagued the industry in recent years. Mass is an answer to that. I believe everything must come into place to make a truly great film, and you can’t help but deduce that this is a great film. From Kranz’s original script and directing, to the supporting performances, everything falls into place like a puzzle.