Movie Review: In ‘My Son,’ James McAvoy delivers with a brilliant, improvised performance 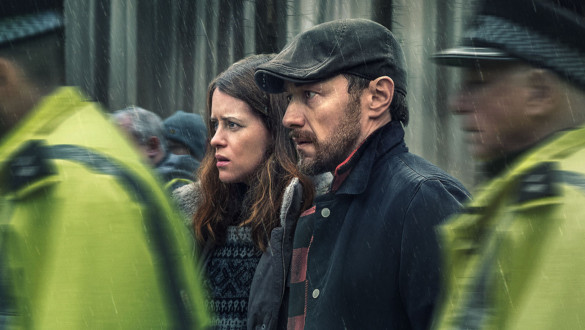 Synopsis: A man goes to see his ex-wife in order to obtain answers about the disappearance of their son.

A gritty mystery thriller in the depths of the Scottish Highlands, McAvoy’s dynamism is what pushes My Son to a higher level.

An English language remake of an international film you say, what could possibly go wrong? Well, this is a subject that is often up for debate as to why you would need a remake, but if you are, then make sure both films are directed by the same guy. Christian Carion revamps his 2017 French film of the same name, which may seem a little odd, but it has been done before – to varying degrees of success – Bangkok Dangerous comes to mind, you make your own mind up about that one.

The big talking point in the lead-up to the film being released was the fact that McAvoy was not given a script or any sort of dialogue for this film, it is quite the feat to go in blind for a feature, reacting to the environment and his co-stars only. McAvoy is an A-lister these days and you’d be hard pressed to find the former Shameless star as anything other than brilliant in most of his work. His character is dark and violent; a man forced to the absolute edge and pushing his every limit, you can clearly see that McAvoy had a lot of fun with this role (being free from script restraints), he can explore and express, being able to delve deep into his acting closet for this unpredictable character.

I must mention the scenery as well, these vast Scottish Highlands are gorgeous and a must for the bucket list – something I was lucky enough to do on a recent visit, not to brag or anything. Due to the location, the cinematography by Eric Dumont is simple and subtle, it speaks for itself, why would you need to play around with it? This vast landscape has a particular eeriness to it; a creepy stillness that moves a mystery thriller such as this into another gear. There is certainly an atmosphere – an intense one at that – full of suspense, which is aided by a classically gritty score. It really does have all the makings to be a decent – and memorable – little film.

My Boy begins with Edmond Murray (James McAvoy) driving through the Scottish Highlands after receiving a phone call from his ex-wife Joan Richmond (Claire Foy), who is distraught after finding out their 7-year-old son has been confirmed as being missing from a campsite. After talking to the local police, it has been deduced that their son Ethan has been kidnapped, and the race against time to find him is now quickly underway. Edmond is soon interviewed by the police, where it is revealed that he works in the oil industry and may or may not have made some bad acquaintances on the road, a possible cause for concern regarding his son’s whereabouts.

After certain secrets are revealed by Inspector Roy (Gary Lewis) which abruptly force the case to be closed – what is this news that has halted this case? – Edmond begins to partake in his own detective work, looking through old pictures of Ethan’s former school trips, with something popping up that has him and Joan becoming rather suspicious. We get into the mind of a desperate father trying to right all the wrongs in his life – he wasn’t exactly present in his son’s upbringing – meaning he must now find Ethan, using all his knowledge and cunning to try and get him back. His own life could be at risk, as he ventures into the deep Highlands with nothing more than his will power and strength. It is amazing to see how efficient and determined a father can be in drastic circumstances.

My Boy really is a decent little film that hits all its required notes. What were the film’s aims? For it to be suspenseful and mysterious – not giving too much away – and for McAvoy to carry it through the typical British weather that engulfs it. McAvoy is the obvious star – it really is a powerful performance – the film didn’t need him in it to be good, but the fact he just elevates it that little bit more. Is it more thrilling than similar plot type films such as Taken? There is a strong argument to say that it is due to there being a sense of realism to it compared to those other gimmicky action films that are full of clichés. This is an example of how a remake of an international film can be a success, clearly aided by the fact that Carion directs both, but don’t take that away from the film still being as exciting as the original. My Boy is a film that went way, way under the radar upon its release, and that is a travesty all on its own.