Movie Review: ‘Mothering Sunday’ is an Affair to Remember (and Mourn) 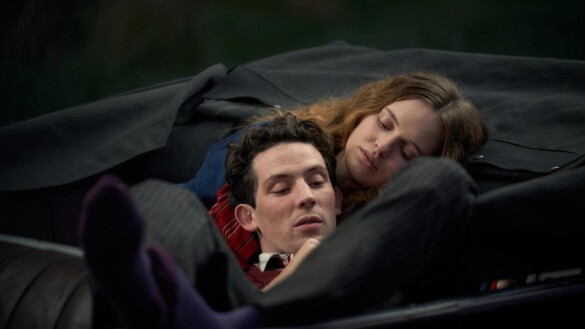 Synopsis: A maid living in post-World War I England secretly plans to meet with the man she loves before he leaves to marry another woman

Maid Jane (Odessa Young) works for a wealthy couple (Olivia Colman and Colin Firth) who are still grieving the deaths of their sons in the First World War. She soon meets up with one of the neighbors, Paul (Josh O’Connor) and the two fall in love. But, due to their differences in class, it is an affair that must be kept a secret, even as Paul gets engaged to another woman who he isn’t completely sure he even likes. It happens per the title, the honorable Sunday when Jane has off while her employers head to church during the Easter season. It is 1920s Victorian values England where such trysts are not permitted or socially acceptable and people must keep their emotions intact.

It feels a lot like an old Merchant-Ivory production in which they embedded themselves in stories of doomed love from an era long forgotten. However, the world after the horrors of a shocking war are still felt in this era with so many young men missing; Colman’s striking scene of breaking down for a moment and then attempting to compose herself is the fracture of a nation’s fabric following the earth-shattering violence. In fulfilling those desires, Paul and Jane do not hold back from those conservative values and follow their heart, even as they know it is not going to last.

For French director Eva Husson, her third full-feature film and her first in the English language, the strong sensuality is in contrast to the strong depictions of group sex and drugs from her maiden feature, Bang Gang (A Modern Love Story). She graduates from modern teenagers engaging in debaucherous behavior to a solid period piece on willful inhibitions to go beyond their social class. Odessa Young, a relative newcomer, gets swept up and shows her vulnerability in her character, such as wandering through the halls naked looking at what could have become if she were permitted to be with Paul.

However, there is no emotional gut punch when the major twist of fate is revealed because it isn’t as if we don’t expect what’s coming. Even as the story jumps forward to Jane in her later years married to an intellectual, it becomes obvious that a tragedy is around the corner. The pacing is fair, but it doesn’t take a firm grasp of the plot moving through the second and third acts. This is likely because the film is deeply faithful to the novella by Graham Swift that it’s based on and doesn’t expound on their surroundings. The film is content at being simply two-dimensional.

Mothering Sunday is not a heavy-duty tearjerker, but a tidy, lamentable story of fleeting love amongst social constraints. It’s similar to previous films including Maurice, Lady Chatterley’s Lover, and Atonement, albeit milder, yet not a bore that could have easily befallen with this type of story.