Movie Review: ‘Moonfall’ is the Best Kind of Distraction 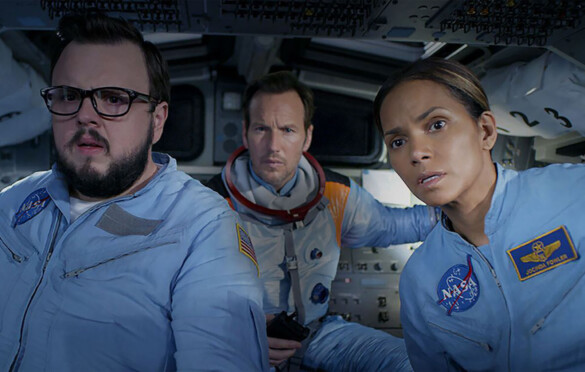 Synopsis: The moon has fallen out of orbit and it is up to a band of astronauts to correct its course and battle the mysterious entity controlling it.

There was an internet joke that came about last year as the theaters across the world opened back up. People ironically and unironically stated, “cinema is back,” with every big release. Everything coming out widely at the time was an anticipated intellectual property and there were few unknowns that made it onto more than 1000 screens. Cinema is only truly back when the audience is treated to a risky original idea plopped into a thirsty late winter doldrum between Christmas and spring. The period where anything can appear and potentially thrive before the cacophony of IP drowns out all original thought again for ten more months. With the premiere of Moonfall, we can safely say cinema is truly back.

It takes a singular mind like Roland Emmerich’s to create a scenario, yet again, in which to destroy the Earth, or at least, large parts of it. He’s made it an art form, in and of itself. There must be entire classes in CGI design dedicated to scenes from his films. Yet, he’s always seemed to have an agenda behind his Earth shattering. Many of his previous disasters focused on teaching lessons like protecting endangered species (Godzilla), climate science (The Day After Tomorrow), and that we should all learn to get along better (Independence Day). Moonfall has no deeper truth to it. Emmerich just wants to blow stuff up this time and it’s a little refreshing.

Emmerich isn’t someone who worries about unique shots, about the flashier techniques of his peers. He’s there to tell the actors to be scared, to be wowed, or to be angry at the CGI mayhem around them. That isn’t to say his team shouldn’t be praised for their (excuse the pun) stellar work. Production designer Kirk M. Petrucelli created sets that ranged from a dilapidated L.A. motel to a military strategy room to a futuristic alien spaceship hallway. Petrucelli and the art department created something real amongst the unreal. The visual effects team has also balanced the mayhem, chaos, and carnage of the moon dropping pieces of itself to Earth with the beauty and awe of what it could look like inside a mega structure that surrounds a white dwarf star. They also didn’t create something new with their nebulous swarm of a villain, but it is effective in the way it moves, kills, and adapts.

There is a lot of unreal in Moonfall. It was already a bonkers concept, but when the layers of detail about what is actually going on are revealed, it’s best to just lean into it. That’s what Emmerich’s films, especially his films of the late ’90s and early 2000s failed to do, which was to delve completely into the insanity of the concepts. These previous films still clung to some kind of reality. In Moonfall, Emmerich and co writers Harald Kloser and Spenser Cohen just up the ante, go the distance, and every other cliché about completely investing in a concept. Emmerich balances his patented earthbound drama with his strange sci-fi caper all at once in a cosmic dance that’s engrossing and engaging, while it is also baffling.

Does Moonfall fail to be ultimately intellectually stimulating? Yes. Does Moonfall have every cheesy line of dialogue in the book? Yes. Does a car chase morph into a car commercial? One hundred percent. Yet, Moonfall is exactly what it’s meant to be. It’s a big, bold disaster film that pulls us out of the disaster film that has become our lives over the last few years. It’s an escape and one that while not entirely “good”, still itches that yearn inside of all of us that wants to be the hero in a terrible situation and pulls at our heartstrings when we see people we care about, however fleetingly, slip into mortal peril. Moonfall is the best kind of disaster, it distracts the brain just long enough to remind us it could be a lot worse.