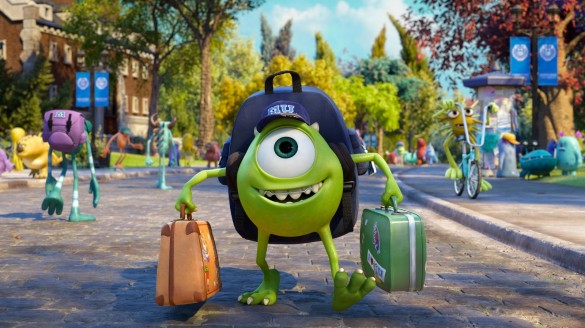 Synopsis: A look at the relationship between Mike and Sulley during their days at Monsters University – when they weren’t necessarily the best of friends.

DIRECTION
Monsters University continues Pixar’s recent trend of making good films but not great ones (i.e. Cars 2 and Brave). The prequel to 2001’s great Monsters Inc. lacks the originality, heart and sweet nature of that film. Whether that is director Dan Scanlon’s fault is up for debate but Monsters University is really his first foray into directing major feature films. He does an excellent job capturing shots with the camera and staging sequences, the voice acting is top-notch and the visuals are some of Pixar’s best* but the story just is not up to snuff and the pacing is a little off and the film falters because of that.

* – Speaking of visuals, the ones seen in the short The Blue Umbrella that plays before the actual film are spectacular. It is Pixar’s first real attempt at photorealism and the results are eye-popping.

SCRIPT
As mentioned in the above segment, the story for Monsters University is the weakest part. Prequels can be tough considering the outcomes are already known but the basic idea here of Mike and Sully meeting for the first time and how their tight-knit relationship forms is intriguing. The only problem is the story does not so much focus on that aspect but rather on how they – particularly Mike – help this group of nobodies (the Oozma Kappa fraternity) turn into somebodies. It’s here where the film borrows ideas from lots of other college comedies, including Revenge of the Nerds and Animal Houses, and uses a lot of the typical character stereotypes found in those films. It is all fun, the college aesthetic and it is mostly humorous but it is all stuff we have seen before. With that said, while it is not original, it also is not very predictable, and the opening involving a young Mike and the final 15-20 minutes are very good. But it is not enough.

PERFORMANCES
Monsters University continues Pixar’s tradition of having great voice talent. Just like in the first film, Billy Crystal and John Goodman voice Mike and Sully, respectively, and do another fantastic job. Crystal clearly loves playing Mike, bringing a youthful spirit to the character, while Goodman has fun playing Sully as more of a screwball jock this time around. Steve Buscemi is really the only other returning voice actor – once again voicing Randy – besides some cameos here and there. But that is OK because the new characters/voice actors shine, particularly Oozma Kappa fraternity members Art (Charlie Day), Squishy (Peter Sohn), Terri (Sean Hayes) and Terry (Dave Foley) and Don (Joel Murray). They all have great chemistry together and are really the heart and soul of the film along with Mike and Sully. Rounding out the major new characters/voice actors is the terrifying Dean Hardscrabble, who is voiced perfectly by Helen Mirren.

SCORE
Randy Newman returns once again to do the score for Monsters University and does a very admirable job. The score contains a lot of different elements, including the charm of the first film and the college feel with a marching-band theme throughout. There are two standout tracks, including one that is not even part of the score but rather a catchy, upbeat techno mix from Axwell called “Roar” that plays during a fraternity-sorority mixer. The other standout track plays over the closing credits and will have you humming it as you leave the theater.