Movie Review: In a year packed with great documentaries, ‘Minding The Gap’ is the best of the bunch 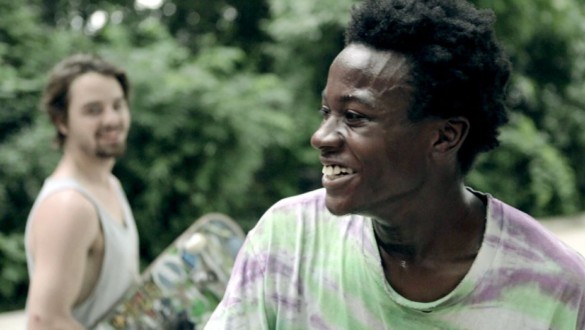 I grew up playing team sports. Baseball, football, and basketball were the sports I participated in, competitively. Each of these sports require a player to be dependent on his or her teammates. I had no problem doing this because I had no problem relying on others in any facet of my life. For some, that is not the case. People who are afraid to give themselves to others, Minding the Gap posits, are geared more towards individual sports. Golf is expensive. It can be tough to find a place to play tennis (and even that requires another person). Skateboarding, however, is cheap and offers more individual freedom than any other sport. The world is your skatepark. The only thing restricting your tricks is your imagination (and the occasional security guard). In the industrial town of Rockford, Illinois, a small group of young men have found an escape from their abusive past and/or present in the form of kick flips and frontside grinds. But Minding the Gap is less a skateboarding film than a film about the modern state of masculinity, class, and race in modern America. What Bing Liu is able to accomplish in his directorial debut is astonishing. The scale of the commentary he is able to squeeze out of a story about him and his skateboarding buddies makes Liu a force to be reckoned with in the art of documentary filmmaking.

The subjects in the film are people Liu grew up with in Rockford. Zack is a constant drinker and soon-to-be father at the beginning of the film, resentful of the fact that the world wants him to fit into some broad mold. Between the drugs, the drinking, and the skating, it is clear that he wants to avoid the realities of adult life however he can. With a kid on the way, though, he is trying to get his act together (or as together as his act can get) for the sake of his son and girlfriend, Nina. Nina plays an increasingly important role as the film goes on, her arc embodying so many of the ideas brought forth in the film. There is also Keire, a slightly younger black man, who is the glue of the film. He is affable and goofy, a young man who wants more from his life but fundamentally isn’t sure how he can make that happen. He is the most talented skater and the only one that lives at home. The last major subject of the film is Bing Liu, himself. Liu was never the most talented skater of the bunch and he ended up becoming the videographer for the group’s skate sessions. This inspired him to become a filmmaker and that is the way he got out of Rockford, which very few do. It is clear that making this him was a very personal and often awkward experience for him. It is anything but fun for him to talk about his friends’ histories of abuse, but it is an endeavor that yields heartbreaking results that will move any viewer to their core.

Much of the brilliance of Minding the Gap stems from its structure. Like so many great docs, it begins as a smaller, more straightforward story before using that base to comment on larger issues. Rarely has this style been used more deftly than Liu uses it here. As the film carries on, more and more facts about the abusive histories of the film’s subjects come to light. As we find out more about the families the subjects grew up with and the city they grew up in, it is impossible to not feel sympathy for everyone involved. The film rides a steady incline of emotional resonance, leading to a crescendo at the end of the film that completely overwhelmed me. Minding the Gap was the first film of 2018 that made me cry, and that was just from viewing it at home on Hulu.

Zack and Keire veer in very directions over time. They treat trauma, the unifying element of the subjects’ lives, in remarkably different ways. There is almost no scene in the film where Zack doesn’t have either a beer or blunt in his hand. His business venture falls through and he blames everyone but himself. He can’t maintain a consistent relationship with his girlfriend and, by proxy, his son. There is even implied abuse (that becomes much less implied later in the film, during an interview with Zack) against his girlfriend. Meanwhile, Keire rolls his sleeves up and gets a job washing dishes at a restaurant, the first job he has ever had. He consistently talks about how badly he wants to get out of Rockford and steadily climbs the ladder at the restaurant, working his way to the front of the establishment.

Keire is the one who learns to rely on others. He is willing to give himself up to the process of the documentary and it is hard to deny that the film had an overwhelmingly positive influence on his life. Even as he continues to suffer heartbreak in the film (at the hands of his family, especially), he manages to maintain a positive attitude. Skateboarding is still an escape for him, but it is no longer his entire life. He begins to accept himself and his past from every perspective. The only major African-American subject in the film, Keire has an extra layer of identity-grappling to do, which comes to a head in a brilliant scene encapsulating the awkward racial situation modern pop culture is presenting in today’s environment. Meanwhile, Zack is unable to find any sort of center. His charisma is greatly outweighed by the increasingly questionable ideals he brings to the table.

One of the Minding the Gaps’s producers was acclaimed documentarian Steve James. Knowing that, it is hard not to compare James’ Hoop Dreams with Liu’s film. On a smaller scale, Minding the Gap captures a perfect snapshot of a certain slice of America (the Rust Belt in Minding the Gap and the inner city in Hoop Dreams), much like James’ magnum opus. Both films teem with life and flesh out the subjects with nuance and respect, no matter how despicable the characters may become in a given moment. Liu is thoughtful enough to approach every issue from all angles. This may be because Liu, himself, suffered a great deal of abuse as a child. He even interviews his own mother about why she was willing to turn a blind eye, to a certain extent, to the horrible violence being committed by Liu’s stepfather. Her response is all the more heartbreaking because her less-than-perfect English makes it doubly hard for her to articulate what is, probably, the greatest regret of her life.

There is a bravery to Minding the Gap that has not been matched by any film in 2018. The personal nature of the story for 24-year-old director (24!) Bing Liu makes it one of the most impactful films in recent memory. Can we escape our pasts? How do we rid ourselves of the tragedies we have experienced? Skateboarding certainly supplies a temporary reprieve but there is nothing stronger than the support of others and a willingness to accept love. It seems like Steve James is one of the people that has supported Liu and I think the future of documentary filmmaking is in good hands because of it.