Movie Review: ‘Midway’ is unable to overcome its flaws, try as it might 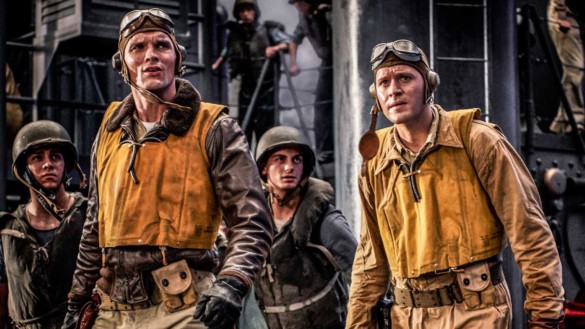 Synopsis: The story of the Battle of Midway, told by the leaders and the sailors who fought it.

Roland Emmerich’s newest film, Midway, is a synthesis of mediocre CGI war effects, a cacophonous sound mix, lackluster dialogue, and a script that never seems to catch a gear.  For those seeking an epic war film, Midway may hit the right notes.  However, some filmgoers may have difficulty keeping up with the film due to its pacing problems, paper-thin characters, and lack of purpose.

Midway begins with the attack on Pearl Harbor on December 7, 1941 and chronicles the events that led to the pivotal Battle of Midway in June of 1942.  In a large-scale war film like Midway, the number of characters can grow exponentially.  Emmerich finds a way to combat this by allowing his audience to follow a handful of characters as they progress steadily toward Midway.  Arguably, the main character is dive bomber pilot Dick Best (Ed Skrein), a cocky yet capable pilot who may or may not fight like he doesn’t mind dying.  Others that fill the mix are an unassuming intelligence officer, Edwin Layton (Patrick Wilson), a robust leader in Wade McClusky (Luke Evans), and a swath of famous Admirals, William Halsey (Dennis Quaid), Jimmy Doolittle (Aaron Eckhart), and Chester W. Nimitz (Woody Harrelson).  As the Battle of Midway inches closer through smaller battles and skirmishes, Emmerich introduces us to both sides of the war. In an attempt to tell a rounded story, Emmerich includes the Japanese strategies and expectations for these battles at sea. Admittedly, this paints a clearer picture of the events that lead to the Battle of Midway, but clearer does not necessarily translate to richer story.

The battle scenes in Midway are adequate and serve the story well.  However, the camera is either too close or too far from the action for any discernable connection.  At some points, there is too much action on screen, which works as a cloudy distraction from the effects.  It’s almost as if the filmmakers knew the effects weren’t working well, so their only solution was to add more.  Aside from the visuals, the sound mix is regularly muddled and incoherent. Dialogue is lost in the barrage of bullet ricochets, explosions, and propeller noise.  This wouldn’t be a problem, because war movies are supposed to be loud, but at times characters are speaking directly to the actions of the film and a viewer can easily miss beats that move the story.  The effect is a confusing story made even worse by the incoherent, yet important dialogue.

The plot of Midway is all over the place.  A viewer could get whiplash from all the locations that Midway visits in its 138 minute run time.  The characters do their best to elude to the next location, but after a while it becomes very difficult to keep up.  New characters are introduced and killed, plotlines are rarely concluded, and even though the story has a known climax and dénouement, it travels in circles in order to reach that established finishing point.  The clunkiness of script is detrimental to the film as a whole. If it were simplified and focused more on characters, Midway might actually be a worthwhile endeavor.

The characters and the actors portraying them are a shining glory in an otherwise muddled film.  Skrien, Evans, and Wilson embody their namesakes and drive what little emotion there is in the film.  The cast of Midway is borderline stellar.  However, the lines they are given and the hoops they must jump through diminish any grandeur their presence purportedly elicits.  In moments of hearth and home, moments that are supposed to give the war meaning, feel hollow and lost. This makes the battle scenes and action meaningless, and worse, often gives the action a certain glorification as if the action is paramount.  Emmerich never properly sets up why they fight and what they fight for; instead, he emphasizes the wonder of war and the exhalation of death. The bravery of these soldiers is never questioned in the film, but at times Midway makes their sacrifices feel futile, which is sorrowful.

Overall, Midway is a loud, booming explosion of a film.  An epic that spans the globe and places a spotlight on the men and women who fought bravely in World War II.  Often sputtering and always demanding, Midway does not do an adequate job of setting up the stakes of the film, and therefore the characters, try as they might, cannot suture this film back together.  The focus of a war film should be on the men and women who fight and for what they are fighting. Without that setup, Midway is just a spectacle of violence.