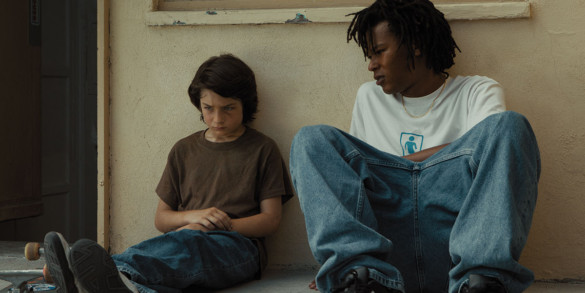 Synopsis: Follows Stevie, a thirteen-year-old in 1990s-era Los Angeles who spends his summer navigating between his troubled home life and a group of new friends that he meets at a Motor Avenue skate shop.

Jonah Hill’s directorial debut, Mid90s, acts as both an homage to the 90s skate culture of Southern California as well as a coming-of-age story. Often at odds with regards to point of view, Mid90s does have some redeemable qualities that forecast Hill’s career as a possibly successful director. The film follows Stevie (Sunny Suljic), a thirteen-year-old boy who becomes ingratiated with a group of skateboarders as he avoids his home life. Struggling to find his place in the world, Stevie is stuck between his family, which includes a bully brother (Lucas Hedges) and a working mother (Katherine Waterston), and his newfound love of skateboarding, which by proxy includes a cast of stereotypical characters. Ray (Na-kel Smith) is the leader of the gang, Fuckshit (Olan Prenatt) is the partying wild card, Fourth Grade is the artist, and Ruben (Gio Galicia) is the previous “new kid.” Each character represents a part of Stevie’s burgeoning personality that wrestles for recognition and acknowledgement. He learns from and commiserates with each of them throughout the course of the film. As they bond, we begin to understand the consequences and perils that come with Stevie’s quest for self-acceptance.

Mid90s does an adequate job painting a picture of Stevie’s ordinary world. The use of vivid realism, sound editing, and music create a world that is rich and exciting for the audience. Once this world is constructed, the characters seem to meander through it with no purpose. This is the point. Most characters are losers from broken homes that become united in their love for skateboarding. Stevie’s path with his newfound friends is vague, often frustratingly so. We are never offered a concrete point of view in the film. Perhaps the film is meant to be a collage of memories that are slowly deteriorating in the mind of an aging Stevie, or on the contrary, maybe the jumble of events is meant to represent the chaos of teenage years. Often confusing and always new, experiences of our youth meld together in a broad spectrum of incidents and encounters which never really sort themselves out in an ever-changing cognizance. Whatever the point of these snippets, they reinforce a typical coming-of-age story, but somehow get lost in the greater landscape of this movie.

If one attempts to decipher the point of Mid90s, it will become easy to be lost in a fog of memory. However, if one holds on to the theory that this film is one story of many regarding a child growing into his own, then this film succeeds in allowing the audience to go along for the ride. Despite the exhausting stereotypes and recycled imagery, Mid90s finds a heart and soul in its realism and depictions of life at the time. Hill feels at home in this location and timeframe, as it is lovingly recreated and exploited with a deft consciousness. Overall, Mid90s struggles with an identity, but manages to be entertaining and exotic. The cloud of memories remind all of us of our youth and the life-or-death struggles we went through in order to be the adult at the end of that journey.

Hear our podcast review on Episode 297: