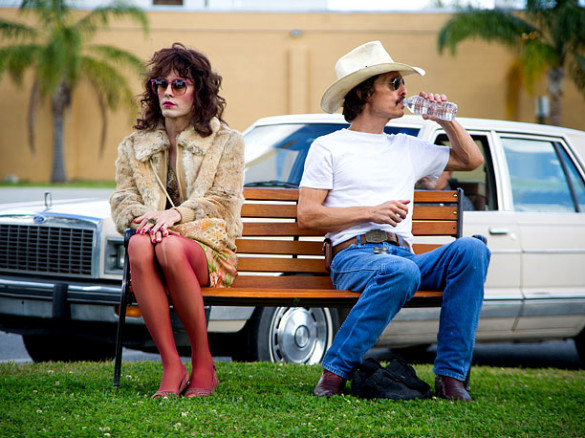 Synopsis: In 1985 Dallas, electrician and hustler Ron Woodroof works around the system to help AIDS patients get the medication they need after he is himself diagnosed with the disease.

DIRECTION
Jean-Marc Vallée’s Dallas Buyers Club is a film that is moving and let’s the characters and performances carry it all the way through. Vallée isn’t set on telling a narrative, but rather introduce you to some characters that have a need and a story that they want to tell. The movie is shot beautifully yet it’s very simple in terms of technique. There are a few defining shots that enhance the characters and their transformation, such as when a man opens the door for Ron and he’s never had that happen to him before. Brilliant decision-making by Vallée. He really let’s the characters shine through and through which is what was needed. The visual style was very mid-80’s and you never doubted it, especially when the brick phones came out. Overall, Vallée was simple and that made his work effective.

SCRIPT
Dallas Buyers Club centers around Ron Woodroof (McConaughey), who finds out he has contracted the AIDS virus in the mid-80’s, in a time where the epidemic was at it’s peak and the medical community was still trying to figure it out. After trying a newly FDA approved product to treat HIV, called AZT, he finds out that over exposure to it will kill you, thus he sets out his own path. In the process, he meets Rayon, a transgender who also has HIV and is being treated with AZT. The two meet up and set up a business to sell memberships, a buyers club if you will, where they can get all the medication they want for a monthly fee. On the surface, it’s a unique story of a man doing whatever it takes to take care of himself and other people in his situation because he feels the government and the medical community isn’t doing enough. The problem is that it lacks a deep focus. The story tells us the transformation that Ron and Rayon go through and the dynamics of their relationship, which was really great to see on screen. But we also see how the business is run and how Ron gets the medications that he would sale to his members, all while trying not to be succumbed to his own addictions. The story also focuses on Ron’s battle with the U.S. government, the FDA and the medical community and how he thinks the Government is screwing people over and how all the legalities of that effect him and his people. While all those areas are covered well enough, the script is kind of all over the place and it lacks the real depth the story could of gone. Overall though, you get enough to still be engaged and the transformations of our main characters is moving and will define this film.

PERFORMANCES
Matthew McConaughey literally disappears into the role of Ron Woodroof and he is hardly recognizable. This is arguably McConaughey’s best performance of his career and it’s amazing to see the turnaround he has had. He is unbelievable as someone who is not only suffering from HIV, but he’s a character who has to transform from being homophobic to someone who is tolerant and ultimately even has a deep care for his gay friend and business partner, Rayon. Speaking of, Jared Leto, who’s back after a five year hiatus, gives his best performance of his career as the transgender Rayon. He is also unrecognizable with all the make-up, women’s clothes and even the female voice to go along with bringing this character to life. The dynamics between McConaughey and Leto are incredible and you drawn into their relationship and the heartfelt moments they would eventually have. Jennifer Gardner plays a smaller role and while she’s not terrible, she’s not great either. The other main leads around her are so on top of their game, that she seems very average. Overall though, this is the McConaughey and Leto show and they steal it away.

SCORE
Rather than use a traditional score, Vallée uses a composition of soundtrack songs to fill the music void for the film. The music, while mostly in the background, is actually really good. We get some great tracks by T. Rex, Tegan & Sara, The Airborne Toxic Event and, of course, Thirty Seconds To Mars. Leto is not only a great actor, but he’s a great singer and the song he has on the soundtrack is really great. This isn’t a soundtrack you’ll notice during the film, but it’s a solid listen to outside of it.

FINAL THOUGHTS
Dallas Buyers Club is incredibly moving and it’s all about the performances. If you have high expectations for the story, you may find yourself disappointed. The story does lack focus but the this movie isn’t as much about the story as it is two characters who needed each other in a rough time in their lives. We see Ron transform and the dynamics between him and Rayon more than make up for the script lacking. It won’t be a surprise at all if both McConaughey and Leto are nominated for awards.