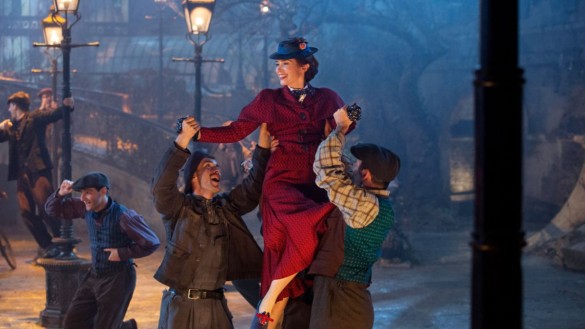 Synopsis: Decades after her original visit, the magical nanny returns to help the Banks siblings and Michael’s children through a difficult time in their lives.

Growing up, there were two musicals I watched more than just about any other films. One was Singing in the Rain and the other was the original Mary Poppins. Both films but especially Mary Poppins, are films that I know almost every word of dialogue and every song, and thus shaped me into someone that takes this genre very serious because of the films that shaped me when I was young and what a musical is supposed to do. Never in my life would I have imagined that Disney would bring us back to 17 Cherry Tree Lane and give us a film that was worthy of standing tall with the original film but that is exactly what director Rob Marshall has done. With Mary Poppins Returns, we are a given one of the most delightful films of the year, Rob Marshall’s best film since his Oscar winning film Chicago, and a films that’s message and tone are exactly what we need right now in the world we live in.

Mary Poppins Returns picks up 25 years after the events of the original, with Michael Banks (Ben Whishaw) and his three children (Pixie Davies, Nathanael Saleh, Joel Dawson) living in the house that he and his sister Jane (Emily Mortimer) grew up in. London, along with the rest of the world, are going to tough times in the 1930’s, and thus it is hard for Michael and his family to keep their beloved home and keep everything together since the passing of Michael’s wife. Michael is told by the bank that he needs to pay back the loan he owes the bank otherwise the bank will take the house, thus leading things to start falling apart once again for the Banks family. Michael’s kids are different than he and Jane were when they were kids, in that they have lived a harder life because of losing a parent and thus have to be a little more grown up to help their father, their aunt and their maid Ellen (Julie Walters) around the house. With all of this gloom and doom coming to pass over the Bank’s family, in from the clouds returns the world’s most famous nanny of all time, Mary Poppins (Emily Blunt). She proclaims to have returned “to look after the Banks children” but she has once again come to try and save this family from the world around them and their own personal struggles as well. With the assistance of a new companion, a lamp lighter named Jack (Lin-Manuel Miranda), Mary Poppins gives Michael’s children, along with Michael and Jane again, reason to have hope and a reason to carry on in tough times.

Of course there are tons of adventures that Mary and Jack take the kids on and they are filled with so much delight and fun that you wish you were going on them with them in physical form rather than just seeing it with your own eyes. My favorite involves going into a bowl, much like the first one where Mary takes Michael and Jane in the drawing with Bert. This is where, just like the first one, the filmmakers really get to shine, using that amazing classic Disney animation along with the live action to make something extremely entertaining. This whole sequence, along with the entire film, works because of the music from Marc Shaiman and Scott Wittman, who nail all of musical numbers with so many fun and engaging lyrics that go great with the dance sequences that Marshall and his team put together.

But I assume that most of you are here to find out one of the big questions surrounding the film, does Blunt come close to being anywhere near as good as the original Mary Poppins, Julie Andrews? The answer to that question is complicated because while this is very much the same Mary Poppins that Andrews played in the original, Blunt gives the character a little bit of a different spine thus making the character her own. Blunt, who worked with Marshall in his last film Into the Woods, shines the brightest in the film that she does something that Andrews did do a lot in the original, which was even when she wasn’t on the screen, you still felt her presence and wanted to see more of Mary Poppins ASAP. But just like the original, Mary Poppins has to have a great companion to help her introduce the children to their adventures, thus leading us to Jack played by Lin Manuel Miranda. Miranda, known as the creator of the most popular musical on the planet in Hamilton, gives a great performance and has fantastic on screen chemistry with Blunt where all their musical numbers together work perfectly. He is not as strong as Dick Van Dyke was in the original but he does a pretty damn good job and you can tell he is having a ball playing this part. The highlight of the film is where they sing the song “A Cover is Not the Book”, where it is a mixture of some of the fun of the original, with a splash of Chicago, mixed with a little of Miranda’s Hamilton, making a sequence that is one of the best of 2018.

There are some minor problems within the film, one involving the banks plot and the character intentions of Colin Firth’s Wilkins and Meryl Streep’s performance as Cousin Topy. It’s not very clear why Wilkins wants to take the home of the Banks family but this film does need a bad guy and Firth plays it good enough and the payoff the whole plotline is very much worth it for the surprise in the end. And while the song the song Streep does sing is very fun, it’s also a bit distracting considering the thick accent she chooses to use, thus making it the most distracting scene in the film. Beyond those two minor complaints, the film is “practically perfect in every way” and by the end of the film, it’s message is one that is exactly what we need in the world right now, in that “there is no way to go but up.” One can only hope that we get to return to this universe down the road and spend another lovely holiday with Mary Poppins and all these wonderful characters.

Hear our podcast review on Episode 305!