Movie Review: Martin Scorsese’s Silence is a complex tale of faith and tragedy 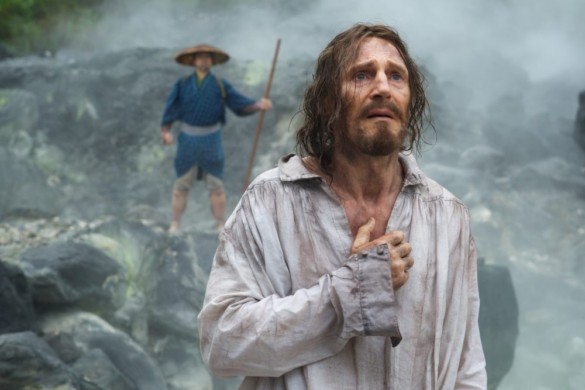 Synopsis: Two priests travel to Japan in an attempt to locate their mentor and propagate Catholicism.

Martin Scorsese’s latest film Silence, is an overwhelming passion project that wallows in hope, faith, and love. With career-defining performances, a near-perfect screenplay and of course the visionary directing of Martin Scorsese, it is no doubt that Silence will go down as another Scorsese masterpiece.

Silence is told mainly through the viewpoint of Father Rodrigues (Andrew Garfield) and his struggle with spreading Christianity across Japan in the 1600’s. This internal battle Rodrigues has with himself is materialized into traveling to Japan to search for his mentor Father Ferreira (Liam Neeson), with fellow priest Father Garrpe (Adam Driver). This physical plot actually becomes lost in the shuffle of the sheer suffering that is witnessed on screen. Making for an almost painful viewing as an audience member.

After watching Silence, it is clear why it took Scorsese so long to make this film. The only focus of the film is religion. It lives and breathes the word of God. It almost never takes its eyes off of themes of faith, hope, and love. That being said, it counters these rather high-spirited themes with moments of agony and suffering. One thing that has always been surprising about Scorsese is his ability to make his films feel real. Almost as if we are there in physical presence viewing what is happening to his characters. And Silence is no different. As events unfold, we sit there with these characters through their darkest moments. Cringing and nearly screaming along with them.

The beauty of Silence is the connection with the overall film. Not just the characters, but every single aspect of the film manages to connect with you as an audience member in some way. Even if you aren’t religious, the film still forces you to wrestle with spirituality on some level, whatever that means to you. Silence succeeds admirably is the ability to make you connect with the faith, without shoving it down your throat. Unlike other Christian films like Do You Believe? and God’s Not Dead, religion isn’t force fed to us. Instead of the film being about finding God or attempting to prove that God exists, Silence focuses on the hope that God brings people and the human costs it takes to spread that message. We visually witness the love that the characters on screen share for Christ. We visually get to witness how beautiful, what the film refers to as The Truth, can be. But then, in an instant that is all taken away.

Japan was reluctant to accept the Christian religion in this time period. Therefore, while Rodrigues and Garrpe are searching for Ferreira they encounter dozens upon dozens of local villagers in Japan. Villagers who are of the Christian faith and are willing to hide the priests in secrecy so that no one is harmed. But we’re in Scorsese’s world, the happiness and beauty of feeling safe and secure does not last long. This is where the suffering emerges off screen. When characters start getting punished violently for being of the Christian religion, we sympathize with them greatly. Once again, even if you are not of the Christian religion.

Silence is immensely powerful in its ability to create an everlasting feeling. Specifically, you find yourself thinking about and grappling with this experience, bothering you for days upon end, trying to process the images you’ve witness. Scorsese juxtaposes Christian paraphernalia with images of our characters suffering. The suffering the characters feel is very real. It’s almost unbearable as a viewer. From the outside looking in, you have this feeling of guilt and regret. Wishing there was something you could do to help make these characters feel something else than despair.

Since the film is told primarily through Rodrigues, we see his suffering the most. As a character, Rodrigues sticks to his teachings. What Ferreira has taught him and how Rodrigues can spread the word of the gospel to every living creature. So once this way of thinking is challenged, Rodrigues is confused and heart broken. He’s not doing anything wrong and the love of and for Christ is not hurting anyone. Yet, the Japanese seem so opposed to his way of living. Rodrigues firmly believes that the villagers he is sharing his love for Christ with are accepting the love and the faith. He is so hopeful that he has shared his experience with others and that it is helping them get through their day by day of hiding and hoping not to be killed. Rodrigues has offered these villagers paradise through Christ and he feels he has succeeded.

Until it all comes crashing down. Rodrigues is broken by the Japanese government. After being captured, Rodrigues is forced to be jailed until he can denounce the name of God. But no physical torture comes of Rodrigues. Instead, he must bare witness to countless deaths of the villagers he has helped and touched. “They aren’t dying for God, they’re dying for you.” These words echo through the audience and through Rodrigues. A terrifying realization that the only thing Rodrigues can do to save these villagers is denounce the faith. He try again and again to save them through prayer and telling them to remain vigilant. But the deaths keep piling up and the suffering becomes too much for Rodrigues. Forcing him to denounce the faith and live life as a normal Japanese man.

The performances are earth-shattering. Andrew Garfield is slowly proving that he is a force to be reckoned with. Not only masterfully taking on the morals and ideals of a priest but forcing us to feel everything he is feeling. Despite both Adam Driver and Liam Neeson’s limited screen time, the two of them deliver as well. Driver, brining another level of suffering and pain to Garfield. And Neeson, seeming to be the solace and bearing all of the answers for Garfield. Every character plays a different part in the greater picture, making the film nearly picture
perfect.

Scorsese’s direction is clearly much more passionate in this film than in others. We’ve always revered Scorsese for his works and he deserves every ounce of it. But for some reason there is a certain energy that emits from Silence that makes this feel rather unique in the filmography of Scorsese. From the images that are shown to make us connect with the pain and suffering, to the flawless interactions between characters Scorsese has clearly taken his time with this project and it has paid off.

Silence will be polarizing for many people. It can separate viewers or it could possibly even bring us together. It holds so much emotional weight and power that it is near unbearable in certain sections. Channeling a tremendous amount of passion for the subject matter, Scorsese pulls of another
masterpiece for American cinema.