Movie Review: Manchester By the Sea is a powerful exploration of grief 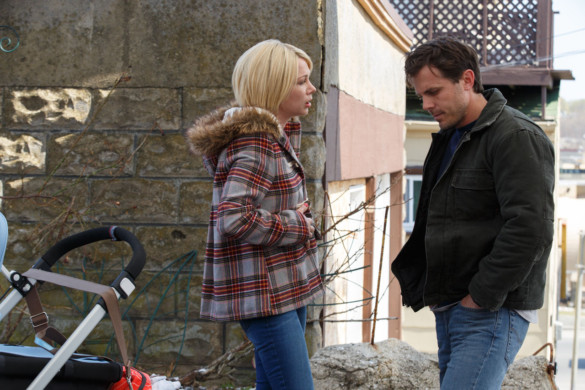 Synopsis: An uncle is forced to take care of his teenage nephew after the boy’s father dies.

Lee Chandler (Casey Affleck) has moved to Boston in an attempt to escape his past. However, he is forced to revisit Manchester once his brother dies. Once there, as he’s arranging the funeral, his past starts to haunt him while he is also taking care of his nephew, Patrick (Lucas Hedges).

Lonergan’s script isn’t too hefty in terms of plot, but boy, is it nuanced in terms of emotional development. And Casey Affleck carries the weight of that in ways that are devastating, yet captivating. If he does indeed win the Oscar for Best Actor, I would argue it’s entirely valid. Affleck is at his absolute best, in all facets of what he’s asked to do. Lee is a broken man living a life full of guilt and blame, which is emulated in agonizing ways in Affleck’s performance. Michelle Williams also gives a heartbreaking performance. She isn’t in the film much, but when she’s there, she’s a powerhouse. The few scenes Affleck and Williams share will go down as some of the most potent of 2016.

Manchester By the Sea, at its heart, tackles grief in visceral ways that will be too real for some audiences. The difficulty of living with regret and shame is not too distant for some. The way Lonergan taps into those ideas is powerful and it rings true in one line near the end of the film, where Lee admits to Patrick why he can’t live in Manchester anymore. It would be a disservice to reveal that line here, but when you hear it, the hair on your arms will raise.

The city of Manchester also adds an interesting dynamic to this film. Lonergan uses setting to give pathos to this film, as it relates to how we couple our griefs to certain times and places. This idea is crystallized tragically in one scene were Lee coincidentally runs into Randi (Michelle Williams) on the street (Manchester is a small town after all), which leads to a moment where both of these characters have to grapple with the reality of their own regrets. It’s heartbreaking to watch and Lonergan does not waste the moment.

Manchester By the Sea may be a somber and dour experience, but it’s one full of hope that people can survive grief. It’s a film that offers the idea that we can learn about new coping processes that we didn’t know existed before. The experience may be arduous at times, but it’s very affecting and ultimately satisfying. Lonergan’s direction is perfectly reeled in, allowing for the film’s dynamic and nuanced performances to shine and reverberate the real pain these character endure. Manchester by the Sea is without a doubt, one of the year’s best films.

Hear our podcast review on Episode 199