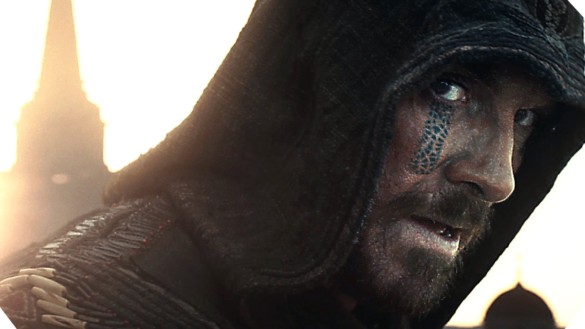 Synopsis: When Callum Lynch explores the memories of his ancestor Aguilar and gains the skills of a Master Assassin, he discovers he is a descendant of the secret Assassins society.

Remember when the video game to movie adaptation were a huge thing? Everybody got really excited about it at first, as the genre was prepared to combine two types of fandom together. It was real popular in the early to mid 2000’s, but since then, the genre has slowly fallen off due to minimal successes. But we’ve received two separate video game adaptations this year, and more on are the horizon. These adaptations have proven to fall short in the audience’s eyes’, and Justin Kurzel’s Assassins Creed joins the club of poor video game movies.

Assassins Creed follows the story of Callum Lynch (Michael Fassbender). Callum is sentenced to death, being convicted of a gruesome murder. However, on a stroke of good luck, when Callum is injected he is not killed. Instead, he is made unconscious and sent to a research facility run by Rikkin (Jeremy Irons) and Sofia (Marion Cotillard). Sofia has created a machine called the Animus, which allows people to live in the memories of their ancestors. Callum is linked to a legendary assassin named Aguilar, and Sofia and Rikkin believe Callum can find an ancient artifact that will make them rich beyond their wildest dreams.

First and foremost, the plot is far too elaborate. The story is incredibly original, and proves to have a rather strong starting point. But the good first 45 minutes of the film is nothing but pure exposition and the asking of many questions. The argument could be made that because the plot is so complex, this warrants a good amount of explanation. But in widely popular science fiction films like Inception, the exposition pays itself off through the characters. In Assassins Creed, the characters don’t necessarily learn anything about the world that they’re thrown into. They just have an opinion on the situation, and their opinions are not necessarily justified.

One, and possibly the only saving grace, is the action. Whenever we do get past the consistent exposition in the screenplay, the film does get rather exciting. In the scenes where we go into the past and witness the story of Aguilar and the assassins’ he was with, the film takes on a whole other level. The action is executed flawlessly. Not only is the choreography of the action near perfect, but how the scenes are filmed and edited together is even more exciting. From the way all of the actors flip, and soar from one building to another, to the crazy twists and acrobatics when fighting with other people. Kurzel tackles a blockbuster action film with a lot of intensity, he just lacks in a few of the other areas of the film.

Perhaps the most disappointing aspect of Assassin’s Creed, is the cast and crew attached to the film. Justin Kurzel directed a film adaptation of Shakespeare’s Macbeth in 2015 and that film was flawless, if you ask me. And with the acting powerhouses of Fassbender, Cotillard, and Irons, it’s hard to believe that this project could fall apart. There is just so much that falls through in the screenplay and character development that it’s hard to even remotely connect with any of the characters. Whenever there is an emotional development with a character, there’s no context. The characters are just getting angry or depressed for no reason at all.

Assassins Creed holds all the chops to be a great blockbuster period piece, but falls rather short. With a grudging screenplay, which in turn makes the runtime feel grudging as well. Despite a glorious cast attached, and some really exciting action, Assassins Creed does not hold up to the hype. Fans of period pieces could enjoy the overall look of the project, but if you were hoping for a bit more punch in your end of the year blockbuster you will not be receiving it with this film.