Movie Review: Maggie’s Plan gets disrupted and it makes for a charming experience 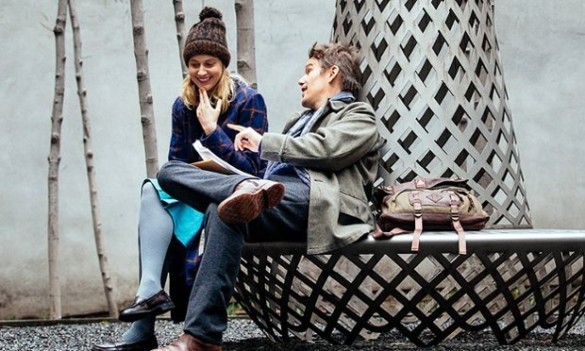 Synopsis: Maggie’s plan to have a baby on her own is derailed when she falls in love with John, a married man, destroying his volatile marriage to the brilliant Georgette.

I’m not terribly familiar with Rebecca Miller’s other films, such as The Private Lives of Pippa Lee, The Ballad of Jack and Rose or Personal Velocity, but they are more serious, emotional dramas from what I know about them. Meaning, Maggie’s Plan is Miller’s first foray into the comedic realm, and while she doesn’t 100% stick the landing, she mostly gets it right. It doesn’t hurt either when your star is Greta Gerwig, who is the queen of indie comedies, especially when they are set in New York as we see in Maggie’s Plan.

Maggie (Greta Gerwig) works at a small college in an administrative position, “a bridge between art and commerce,” as she puts it. And while she has a good job, her life isn’t where she wants it to be. She yearns to be a mother. However, that’s a problem when you can’t hold down a long-term relationship, so she is seeking a sperm donor. After some debate with her friend Tony (Bill Hader), who is against the idea, she settles on an old college friend in Guy (Travis Fimmel), who was a math whiz but has decided instead to be a top tier pickle farmer. Well this plan of hers is interrupted by John Harding (Ethan Hawke), who works at the same school as Maggie and the two start to develop an unexpected romance. However there is a problem; John is married. His wife Georgette, who also works in academia, is pretty successful but it comes at the cost of their marriage fizzling out. To give more details away would be doing you a disservice but let’s just say, the relationships between Maggie, John and Georgette gets rather interesting. And let’s not forget, Guy also appears at some point later in the film too.

The screenplay on the surface may seem trite but it’s actually smart and viscerally honest as it relates to how people react to one another. Sometimes, it is a little too honest when it comes to that idea and character reactions in Maggie’s Plan. The film also flips expectations on their head as far as romantic-comedy tropes go and it takes some rather clever turns near the third act. The dialogue is snappy and witty with some great humor thrown in as well.

Of course, it’s really the performances that make this film, which are so charming and magnetic. Gerwig plays a character that may seem a bit familiar if you’ve seen her in other Noah Baumbach films but she owns the role. She impeccably treads this line of competence, or the lack thereof, and stability, all qualities that make Maggie fun and engaging. Gerwig is simply the rhythm of Maggie’s Plan and she is the heart of the movie’s charm.

Ethan Hawke is equally as charismatic and wonderfully chews on intellectual and philosophical dialogue, a skill set that he maneuvers perfectly to never feel too distant from the audience. I mean, he is an expert in the field of “ficto-critical anthropology” after all, so he needs to be smart. However, Hawke reminds us that he is also human and full of emotion like everyone else. Like Gerwig, Hawke perfectly treads that line and makes the character compelling and sympathetic.

The unsung hero of the film though is Travis Fimmel as Guy. Here is a guy, no pun intended, who is smart (again, he is a math whiz and successful business man) and full of genuine reaction. He is a gentleman who just wants to do right by Maggie. He may be a bit socially awkward but you can tell there is honesty behind Fimmel’s eyes that speak to the heart of this film thematically. And huge credit to the screenplay and Miller’s direction for keeping much of Guy’s history mysterious. There is earned ambiguity behind his character that shines through in Fimmel’s performance. There is a scene halfway through where Guy runs into Maggie on the street, and near the end of the scene there is a close-up on Fimmel’s face that speaks a thousand words and is one of the best moments in 2016 when it comes to film. He is a true highlight of Maggie’s Plan.

Most of the problems of Maggie’s Plan lie in a few awkward transitions, which probably come from a lack of experience in the genre on Miller’s part, and also Julianne Moore’s performance. I love Moore as much as everyone else but her over-the-top, eccentric performance is rather jarring and doesn’t tonally fit with everything else. Additionally, the writing of her character is rather thin, making it harder for Moore to make Georgette feel fully fleshed out. Most of the writing and directing of this film is pretty good, but you can tell that Miller is dipping her toes into comedic waters and it made for a few slip ups.

Overall, Maggie’s Plan is a solid film full of alluring characters and a story that does surprise you in certain regards. It’s a fun experience and one that I can fully recommend that you check out.