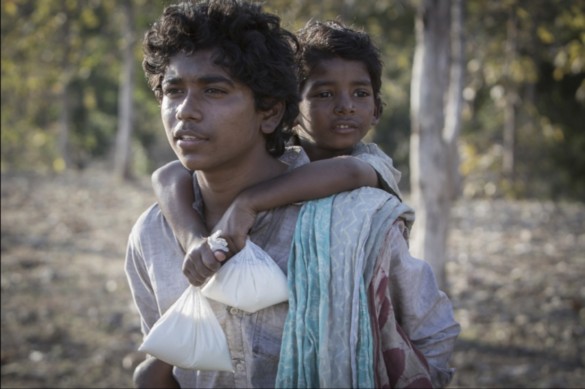 Synopsis: A five-year-old Indian boy gets lost on the streets of Calcutta, thousands of kilometers from home. He survives many challenges before being adopted by a couple in Australia; 25 years later, he sets out to find his lost family.

If you’re going to watch Lion, bring your tissues. Garth Davis’ directorial debut isn’t perfect but it brings an emotional wallop that is impressive for a first time director. The story of Lion is familiar to a lot of people by now, but even if you know the story, that does not stifle its pathos. The first half of the film is damn near flawless in the way Davis explore’s Saroo’s lostness, both internally and outwardly. The second half isn’t quite as crisp, but Davis still offers a robust climax that serves this story very well.

Young Saroo (played by newcomer Sunny Pawar) is living in a small village in India with his Mom, brother and sister. One day, he follows his brother to a train station, where he accidentally boarded a stationary train that started traveling after he fell asleep. A few days later, Saroo found himself in an unfamiliar place (Calcutta) with nowhere to go. Eventually, after surviving many months on his own, he is found and adopted by a couple in Australia. 25 years later, adult Saroo (Dev Patel) decided to find out what happened to him as a little boy and his lost family.

Dev Patel gives a strong performance here that could garner him an Oscar nomination for Best Supporting Actor. However, it’s newcomer Sunny Pawar that truly make Lion the emotional powerhouse that it is. The way Pawar is able to convey fear, confusion and longing, all without saying much is strikingly visceral. And the moments of dialogue he does have, calling out for his mom and brother, is devastating. Pawar is able to illustrate a lot of emotion in his eyes, which renders his adoption scenes even more powerful. Even the film’s climax resonates more because of how Pawar’s performance lingers in your mind. Patel also makes that sequence work as well, but Pawar (as well as an underrated Abhishek Bharate) is the key to this film working emotionally.

Speaking of Patel, the film does fizzle out slightly in the back half once he shows up on screen. Part of the problem is how the script meanders in its storytelling, trying to build up several plot points into a restricted space. The first half of Lion spends so much time on young Saroo and his challenges of being lost, which is perfectly constructed, but it doesn’t allow for all of the material that Luke Davies’ screenplay wants to explore in the back half. As a result, Saroo’s relationship with Lucy (Rooney Mara) isn’t fleshed out very well and Nicole Kidman’s Sue Brierley loses screen time that could have been impactful. Additionally, Davis’ uses symbolism and flashback to help bring connective tissue that was unnecessary.

Despite those missteps, the film’s back half does feature some great moments of catharsis that would be a disservice to reveal here. I’ll simply say that Patel does a great job of making Saroo’s turmoil feel real. His conflict is understandable and his motives are true.

Lion is a film that will rip your heart out, but in all the best ways possible. Saroo’s journey is one full of sadness, hope and life. The way he learns to define “home” is powerful and inspiring to those who feel isolated and alone. Davis is a filmmaker with huge potential, and after watching Lion, I’m already signed up to see what he’s going to do next. As for Pawar, he’s one of 2016’s biggest surprises and he gives a performance I will soon not forget.