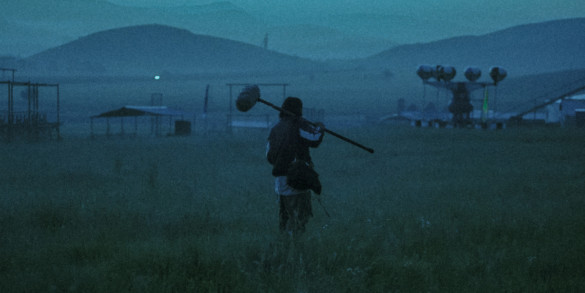 Synopsis: An aimless film school student goes on an ambling road trip across China in a rickety old Jeep in this charming, deeply personal road movie.

Wei Shujun’s debut feature showed up at the London Film Festival with an aura of intrigue surrounding it. An autobiographical slacker-style comedy in the vein of Jarmusch or possibly even early Linklater, there could have been cause for a little eye-rolling, such is the typical nature of debuts like this. However, Striding Into The Wind never really becomes cloying enough to justify that. Instead, it’s rather sweet and laidback, choosing not to self-indulge (thankfully) too much in its protagonists and instead of providing something of a portrait of capitalist China and its effect on the “lost generation”.

Kun (played by Zhou You) is studying to be a sound recordist at a film school in Beijing. He and his friend Tong (Tong Linkai) seem to have been there forever. They sit at the back of the class talking to themselves, watching videos of half-naked cam girls on their phones, and undermining the authority of the lecturer, who regularly calls them out for never listening. They don’t feel they need to, though. Kun is talented, perhaps only underachieving because of his feelings of suffocation at the strictures of University. At one point during a lecture on Foley recording (the art of adding manual sound effects to a movie), the lecturer attempts to make an example of Kun by calling him out, asking him to recreate the sound of horse hooves for a movie. Kun then takes the textbook the lecturer offers him so he can find a solution in it, rips a few pages out, and uses those pages to create the desired sound. It’s a brilliant scene which emphasizes the way in which ordinary rules can sometimes be a deterrent to success rather than the cause of it. They are also taking part in a student production led by an amusingly arrogant director who spends all his time flirting with his lead actress, says things like “who needs a script? The film will come to life when the camera starts rolling” and regularly extolls the virtues of auteurs such as Wong Kar-wai, Hou Hsiao-hsien, and Hong Sang-soo. You feel these are the kinds of attitudes Kun, and Shujun, are fighting against.

Elsewhere, Kun frequently bothers his girlfriend Zhi (Zheng Yingchen) while she’s at work as a hostess. He wants them to travel together to Inner Mongolia, which represents a sort of freedom from the bounds of society to Kun, but Zhi is more than aware of her responsibilities and regularly rebuffs him. So, to fund his adventure, Kun begins a series of jobs he completes in a slacker-esque manner (he’s given CDs by a record producer to sell, but instead he and Tong spend their time throwing the CDs onto train tracks).

Everything plays out in a very languid, picaresque manner. There is very little through-line here; as with the likes of the previously mentioned Linklater (Dazed and Confused in particular), it’s simply a snapshot of a life. Shujun allows each scene to unfold at its own pace, leaving the camera to linger in a static position while the drama slowly burns on. There’s a sense of foreboding that underscores proceedings, as though Kun and his generation are fighting a rising tide of hopelessness. Even in the very first scene, which sees Kun get frustrated with his driving lesson, abandon his car and instructor in the middle of the street, and walk away, it is clear Shujun is taking aim at the conventional boundaries of society. Kun seems to abhor any kind of authority and discipline (the reveal that his father is a police officer and his mother a school teacher seems to hint at a childhood couched in rules and disciplines, to which the obstinate Kun rebels) and lives a life without boundaries, be they personal or societal.

Striding Into The Wind feels concerned mostly with freedom. Freedom from the rules of society and the roles we must play within that society. Kun’s personal voyage to Inner Mongolia is tinged with the idea, the hope, that Mongolia represents liberation from those rules. The China which Kun lives in is rapidly changing, embracing a capitalist structure more and more, which disavows the poverty-stricken and increases the likelihood of a life of hardship for people like Kun. Even when he reaches Inner Mongolia, Kun realizes it is not the bastion of freedom he had anticipated. Modernity has spread here too, to his dismay.

There is no real answer here. Shujun is concerned less with conventional plotting and more with the vagaries of modern life. Striding Into The Wind works best when it calls out the post-modern world which feels increasingly soulless, and through Kun shows a glimpse into the life of the average Chinese young adult, who feels adrift in this new world. It is refreshingly downbeat, determined not to hold the hand of its audience, or provide easy solutions to the difficult questions it asks. In Kun we have a protagonist who is all too real – even those who don’t share his cultural influences will recognize a frustrated underachiever searching for meaning when they see one – and relatable. At one point in the movie, we see wild horses running free over the grassland, and one would be forgiven for thinking this is the real point of Striding Into The Wind.