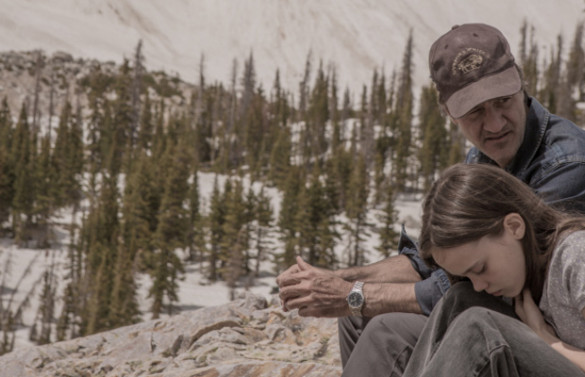 Synopsis: When a man meets a young girl in a parking lot he attempts to help her avoid a bleak destiny by initiating her into the beauty of the outside world. The journey shakes them in ways neither expects.

Based off of the Bonnie Nadzam novel of the same name, Ross Partridge’s Lamb viscerally brings to life a journey of self-discovery through a relationship between a little girl and an older man. Partridge not only directs but also writes and stars here, and in this case, the vision from the page to the actor to the director is pretty consistent. From beginning to end, Partridge fills the screen with awkward situations, an unrelenting feeling of “is this gonna happen” and brings us to the crossroads of dubiousness and earnestness. Yet at the same time, the journey on display is also genuine and human.

David Lamb (Partridge) is a man who is on the verge of divorce, his dad just died and he’s in the middle of an affair that is mostly just passing the time. Then everything changes when Tommie (Oona Laurence) approaches David on a dare to ask for a cigarette. Realizing that Tommie is being duped for laughs by her friends, he “fake” kidnapped her to teach Tommie’s friends a lesson. The scene itself is quintessential in how the rest of the film is about to play out. It’s awkward, trusting and there is a lesson to be learned. Soon after, the two continue to meet and get to know each other until they decide to take a road trip together so David can help Tommie learn to appreciate life and nature more.

Partridge isn’t worried about how obvious his metaphors are as we see the wolf preying on the lamb and her trust. Taking it a step further, Tommie even receives a white gown that she wears part way through the film just to look the part. Don’t get me wrong, the metaphor works here and it’s thrilling. David seems genuine but Partridge’s performance never eases the tension with his ambiguous conviction always lurking around the corner, kind of like a hungry wolf. The question is always there. Where is this going? What is David really up to and how far is he willing to go? That balance that Partridge displays is quite stellar and works perfectly. Laurence is also really good. Her mom and dad aren’t caring parents and she’s vulnerable. So when the wolf shows her attention, she falls into the potential trap as that attention means everything to her. And regardless of David’s motives, to Tommie it comes off as genuine and Laurence sells every second of it.

While the relationship between Tommie and David is always evolving here, narratively it does fizzle out in some places near the third act. Some of the sequences in the cabin lose their compelling touch and it becomes a bit dull in a few spots. However thematically it stays consistent and David’s story becomes more heartbreaking as it crystallizes with Tommie. Ultimately, the film has a lot to say about this notion of genuine connection and why we strive for it. Both David and Tommie found themselves, not just vulnerable, but seeking something real. Seeking companionship. Seeking a way to connect. So yeah, while very awkward and untrusting as it seems, the heart of this film is wrapped up in how authentic connection changes us. And as I said earlier, that notion is genuine here and the heart resonates.

The final shot of the film is heartbreaking, but in all the right ways. The dramatic tension finally lifts for a brief moment and as it does, the wolf is revealed for who he really is at this time of his life. Despite a few narrative lapses, Lamb is a great watch if you can make it through. It’s awkward and some will find the relationship between an 11-year-old girl and a 45-year-old man too bizarre but there is something thematically to chew on that as I’ve said many times already is…well you know.