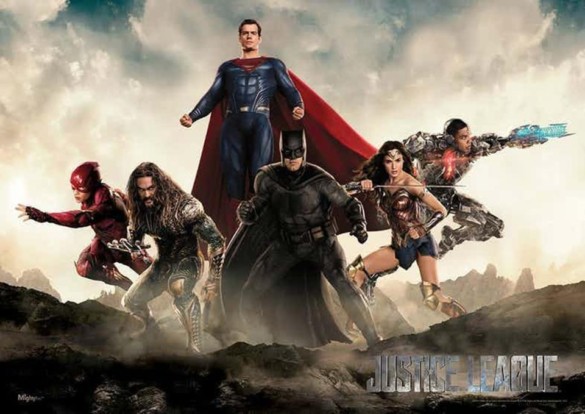 Synopsis: Fueled by his restored faith in humanity and inspired by Superman’s selfless act, Bruce Wayne enlists the help of his newfound ally, Diana Prince, to face an even greater enemy.

So grey has been DCEU’s run that a particular fictional billionaire could go into crisis. The sentiment thickens when Justice League is considered, a film that has encountered hurdle after hurdle from 2007 toward the brink of release. With one heartbreaking shutdown at the 90-percent mark (when Mad Max’s George Miller was on board), 10th-ish-hour director switch, costly tone-lightening/color-adjusting/mustache-removing reshoots, fans and anti-fans needlessly baring fangs (aiming for jugulars over the runtime, sigh), allegedly sexualized costumes, a rotten rat of a producer, and that Rotten Tomatoes’ score fracas, mustering just 0.5 more layer of anticipation for the film is a legitimate struggle.

But “Holy Optics, Batman!” as the final cut is an entertaining romp even with apparent blemishes.

As indicated through director Zack Snyder’s trademark emphatic slo-mo and Sigrid’s dreamy take on Leonard Cohen’s Everybody Knows, the world of Justice League is a devolved one: aimless, at times rainy, hostile to thy foreign neighbor, no Superman (Henry Cavill) and some bug-esque monsters. These are Parademons, minions of one axe-wielding Steppenwolf (Ciarán Hinds) who wants to use three “mother boxes” to burn and turn our world into theirs. And so, “find support” replaces “arrest goons” as the first item on Wonder Woman (Gal Gadot) and Batman (Ben Affleck)’s to-dos.

Although the faces to search for are known – identified in Batman v Superman as Aquaman (Jason Momoa), The Flash (Ezra Miller) and Cyborg (Ray Fisher) – there’s still excitement when meeting them up close. Momoa, with a head-swimmingly delightful show of cocksurety, is easily the best of the three and a fan-favorite, not to mention the finest host for visual treats that are readily supplied by d.o.p. Fabian Wagner (whose 1.85:1 ratio choice breaks with previous films, a move similar to what Seamus McGarvey did with The Avengers). Aquaman also marks the debut of a potential new leaf that DCEU should assume from here on: when appropriate, let’s have laughs, and if possible do so at the world’s end.

There are clear traces though in which writers Chris Terrio and Joss Whedon find crafting the downright gleeful banter, which unlocks characters’ previously missing abilities (Cavill and his Superman do court laughs! Amy Adams’ Lois Lane now has chemistry! Miller shouldn’t be typecasted as a psycho, folks!), a too-enjoyable activity that they forget to address pacing issues. Here we go again, the second coming of BvS’ central issue where the main plot is halted to unfurl the reasons one should care for the new trio and care more for the old guards. Thanks to affecting performances, especially between Miller and Billy Crudup (as Flash’s wrongly incarcerated dad), the drag in these character beats is more tolerable, save for a late-game farmhouse reunion with a soapiness that test limits.

Conventional wisdom advises against mentioning Marvel in a DC venture, but something has to be said about the paltry villainy on display here. Universes thought to be uncrossable become precisely so through this department, considering Steppenwolf has copied Thor: Ragnarok’s Hela (or all of MCU’s villains, really)’s “Menacing, In Fashion Only” page. Not even all the honey inherent in Hinds’ voice can save the character, who has been brought to life with underwhelming digital wizardry. Well, at least he blends well into the yet-again pixel-packed third act now dunked in red instead of blue. That’s a shame, as an all-out spectacular “protect the mother box” sequence on Themyscira sees Steppenwolf appropriately oozing apocalypse, a trait akin to Days of Future Past‘s murderous Sentinels that would have let the fear of those who oppose him breaches the fourth wall.

“You can’t save the world alone,” the poster suggests, and luckily a consistent thread of unity behind the camera and sparkling camaraderie in front prevent Justice League from embracing a darker fate. It’s not all spotless due to the CGI and clear occasions where the Whedon touch trounces Snyder’s, but in the end the gears do come together.