Movie Review: Architecture and humanity become one in Columbus 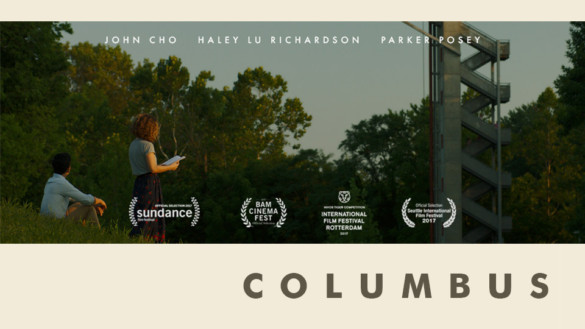 Synopsis: A Korean-born man finds himself stuck in Columbus, Indiana, where his architect father is in a coma. The man meets a young woman who wants to stay in Columbus with her mother, a recovering addict, instead of pursuing her own dreams.

Film encompasses a means of visual interpretation, a form of structure, design, symmetry, and juxtaposing means. In that sense, can we also call film a form of architecture? Kogonada’s answer is a well-rounded ‘yes’ with his debut film Columbus, a film ready to join the conversation among the finest directorial debuts of the past few years. Kogonada urges us to consider film and character as its own form of architecture, in the same way an architect him/herself strives to display a sense of modernity; this is not just achieved superficially, by way of camera angles and music, but in character most especially. In Columbus, character and architecture become completely synonymous, displayed in the way all architects view their own work – human.

Columbus follows Kasey (Haley Lu Richardson), a young woman battling her own juxtaposing means; remaining in Columbus, IN to take care of her recovering addict mother, or further pursuing her own desires in architecture, which she has currently put on indefinite hold. Her desires are challenged when she meets Jin (John Cho), a perceivably upper class literature translator who finds himself stuck in Columbus, IN on account of his comatose father, a professor in architecture. Together, they share walks and talks about not just architecture, but reflect on their own hopes and wants, leading to an introspective balance between the two of them. Kasey, who remains truthful in her love and affection for her mother, finds herself being less truthful to herself; the same can be said for Jin and his own father, which makes for a rather saddening dichotomy. Jin and Kasey couldn’t be more different (in appearance, Jin certainly appears more “well off”), but buried deep within they aren’t any different at all; it’s that internal symmetry that masks their outer appearances, providing the film with its genuine pathos. This is an architect at work, and character is the architect’s creation.

And so are his aesthetic choices, as Kogonada also employs a craft behind the camera as well. Columbus is one of the best shot films of the year, because its use of cinematography is appropriate and right. We are immersed into a real sense of place, where visual structure and form have their own deeper meanings; a somber glass reflection as Kasey discusses a favorite building to Jin (appropriately facing their refracted inner selves), the use of structure symmetry and perpendicular angles, the way the inside of various rooms feel so inescapable, and how outside feels almost too open, looming, and uncertain. Such a use of angles mirrors Jin and Kasey’s own relationship, a relationship that wisely remains romantically ambiguous, and shows how symmetrical the two really are despite being in opposite physical ends. Elisha Christian and her camerawork should be in contention for Best Cinematography this year.

Not to give all the credit to Kogonada and his wonderfully subtle direction and gentle script (though trust me, he deserves much of it) but the structure would all come crashing down without John Cho’s and Haley Lu Richardson’s immediate chemistry. Haley Lu Richardson especially; she evokes pain and joy almost simultaneously, communicating her internal struggle by facial expressions alone. In her subtlety, she gives one of the best leading performances of the year, and much like the film’s wonderful cinematography, it would feel wrong to say such a performance is among the most underrated and under-discussed of the year.

But sadly, this can be said about the film as a whole, which shares those same underseen notions. Columbus is criminally buried among a sea of other great films (all of which are still worthy of discussion), but we should be smart enough to comprehend them all simultaneously; after all, Kasey has that same ability with regard to various architectural facts. Kogonada turns Columbus into a glorious study of not just architecture, but the art’s own hidden meaning, about the line between complacency and modernity. Modernity itself is what architecture is meant to reflect, only to been seen as the film’s biggest irony with two characters who refuse to let themselves progress forward, but in the end we have to. It’s a complete and wonderful arc, made by a wonderful architect.