Movie Review (Sundance): ‘Judas and the Black Messiah’ Indicts The Present With The Past 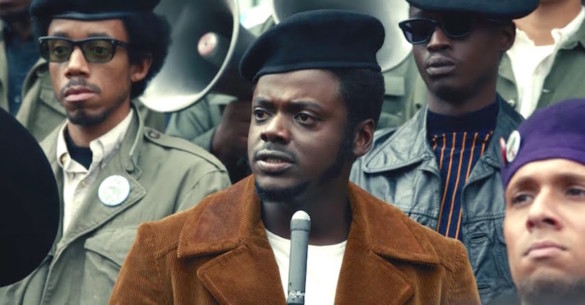 Synopsis: The story of Black Panther Fred Hampton’s rise and his betrayal by William O’Neal.

Say it with me, “I am a revolutionary!” The Chairman of the Black Panther’s Illinois chapter, Fred Hampton, has given himself to the cause, no matter the repercussions. The crowd chants with him, filled with immense passion, their fists raised firmly in the air, Hampton’s words giving them much needed hope. Hampton stands at the podium, but feet away, standing like a bodyguard, is William O’Neal. This man is no ordinary Black Panther, but a man who has exchanged his prison time to become an FBI informant. The two men, different in ideals, now fight for their own version of what freedom means to them. The focus of Judas and the Black Messiah is not to simply tell the story of Fred Hampton and his betrayer William O’Neal, but to mirror it to today’s world, using this story as a means to speak truths that so many need to hear.

It’s the 1960s and the Black Panther movement is increasing around the nation at an accelerated rate. The group is made up of Black people, clinging and standing firm against a world that’s not inconspicuous with their racism. Their hatred being spewed by “the man” like venom from a serpent. Fred Hampton is the beacon of light for the Panthers. He’s a wise man, not eager in waging war against fellow brothers and sisters, no matter which group they come from. Hampton’s vision is to come together against the society that puts them down, which he later uses to help create the Rainbow Coalition: a representation of several minority groups, under one umbrella. His presence is a towering one. His words shake the members to their core. Daniel Kaluuya plays Hampton in all his glory. We can talk about Kaluuya’s previous outstanding performances in Get Out, Black Panther, and Widows; but nothing even remotely comes close to his performance here. He gives me chills that I still can’t shake in the hours since watching the film. But where there is a hero, there’s a villain lurking in the shadows.

The film begins with LaKeith Stanfield playing an aged O’Neal for an interview in 1990. The interviewer asks a rather complicated question as to what O’Neal would tell his son about his involvement in Hampton’s cold-blooded murder. As the story progresses, we understand who this man is, bit by bit. O’Neal negotiates a deal with Roy Mitchell (Jesse Plemons), an FBI agent who has been tasked with taking down Hampton in any way possible. A task given to the Chicago agents by none other than J. Edgar Hoover (Martin Sheen), himself. O’Neal’s driving force behind being so forthcoming with information seems to be his need for money, at first, but he soon gets in over his head. O’Neal rises through the ranks of the Panthers, even becoming Hampton’s chief of security. Stanfield is brilliantly cast as the Judas to Hampton’s Christ-like figure. His proclaimed loyalty to the party can’t fully mask the frailty that hides beneath the surface. His eyes speak volumes as the right and wrong of his situation continues to wrestle inside of him. Stanfield will play second fiddle to Kaluuya’s dominating performance, but don’t let that distract you from the greatness he displays on screen.

Directed by a relative newcomer, with only one other feature film to his filmography, Shaka King presents this shocking tale of Judas and the Black Messiah for the masses. A true visionary, King was meant to tell Hampton’s story. We’ve all seen films set in the 1960’s, but this film is completely different — it drips with true authenticity. King’s passion for this story strikes the very soul of its viewers from the moment the film begins. He crafts the film, not to have the viewer simply watch it, but to experience it. To walk in Hampton’s footsteps. To fight for justice and equality like Hampton did.

A nation is in turmoil, or as Hampton says himself, “America is on fire, right now.” Judas and the Black Messiah is, no doubt, an indicative mirror image of our current state. It’s a tough pill to even think that we have to swallow again — the nation at severe odds with each other and minorities continuing to be discriminated against. Or maybe it’s an ugly pill we’ve never had to stop taking, but one we’ve become numb to by those that are force-feeding it to us. King refuses to shelter his viewers from the terrors that come with a nation at war, and those who remain complicit to such atrocities — their silence being an equal betrayal to the cause. After the gut-wrenching facts are displayed across the screen at the end of the film, King ends the same way he begins. The interviewer asks the question to O’Neal once more. In some way, King asks you the same question: “what will you tell your children about your involvement, or lack thereof, in our world’s current situation?”