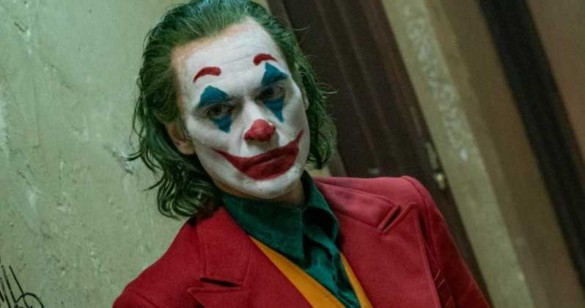 Synopsis: In Gotham City, mentally-troubled comedian Arthur Fleck is disregarded and mistreated by society. He then embarks on a downward spiral of revolution and bloody crime. This path brings him face-to-face with his alter-ego: “The Joker”.

Joaquin Phoenix has slowly grown a reputation for playing characters that are bugging out at all times, either so internally or externally that their chaos is noticeable immediately. From his hazy, wrenching performance in Paul Thomas Anderon’s The Master or his explosive work in Ridley Scott’s Gladiator, to the repressed hitman in Lynne Ramsey’s You Were Never Really Here, you can always notice how off they seem from the first scene. All of this makes him ideal to play a villain, and it makes him almost perfect to play the iconic Joker, an agent of chaos and destruction. The only problem with Joker, the movie that makes this a reality, is he’s paired with Todd Phillips, a connoisseur of dudebro comedies and mediocrity. Phillips’ script leads Phoenix to have to fill in the blanks, giving us a movie that feels like one and a half hours of a first act, and then an operatic final to wrap it all up.

One of the biggest problems with the entire experience is that it feels like we’re treading water. As you watch Arthur Fleck (Phoenix), Mr. Soon-To-Be-Joker, continuously get beat down by life, it nears misery porn without any sort of plot to carry it. Fleck stumbles from his miserable clown job (where he gets fired), to his creepy crush on his neighbor (who rejects him), to his aging and frustrating mother, who cares far too much about Thomas Wayne. Political turmoil rages in the background, as “super rats” roam the streets, and a garbage strike leaves Gotham City looking like a wasteland. A co-worker gives Arthur a gun to keep safe, but after being attacked by three drunk finances bros on the subway, he uses the gun and kills them in self-defense.

On paper, Joker could be great. From the ugly 1970s Scorsese look of the production design, to the cast which includes Brian Tyrell Henry and Zazie Beetz, there’s enough here to satisfy everyone hoping for *supposedly* deep character study of the world’s most famous chaotic evil. In fact, Joker pantomimes a great movie, ripping the look of Taxi Driver and some plot points of The King of Comedy. The problem is that Phillips doesn’t understand really what makes those movies work. There’s no deeper understanding to The Joker to be gained either, as what makes him famous is that he’s simply crazy. Phillips convinced Phoenix by saying they’d be sneaking in a “real movie” under the guise of a superhero film. The problem is there’s nothing “real” here, it’s a shallow vehicle for Phoenix to act his hardest, and for Phillips to play dress up, wearing classic movies to try to elevate mediocrity.

Still, the entire thing isn’t a waste. The movie’s ugliness is its best selling point, because even if it’s playing dress up, there’s still more grittiness in a fake Taxi Driver than your average MCU film. Phoenix is Acting with a capital A here, drawing attention to his intense weight loss and his scary maneuvers, and he tries his hardest to really give a one note character a soul. He flails around, humorously dancing down a giant set of stairs to Gary Glitter’s “Rock n Roll Part 2” in a scene that’s been used in all of the marketing materials (the song being another provocation within itself), but it just exemplifies how hard he’s working to pull this off. There’s nothing insightful about his performance unless you want to see a great actor freak out on screen.

Joker is a frustrating experience, because it’s a dull exercise in generating shock and disgust while lacking any sort of thematic coherence. Spurts of extreme violence hope to remind the audience of how intense this film is supposed to be, but it feels like it’s either not enough or gratuitous. There’s one scene where everything finally comes together, as Joker makes his way onto a talk show, and there’s a palpable sense of tension there. Too bad it ends with Phoenix’s character shouting the muddled themes into the camera. Phillips’ script poorly attempts to explore poverty, abuse, trauma, violence, income inequality, and a handful of other relevant political moments, but it’s summarized best by the Joker when asked about his makeup. When asked if it’s a political thing, he simply responds “I don’t believe in anything, I just thought it’d be good for my act.”

Hear our podcast review on Episode 346: