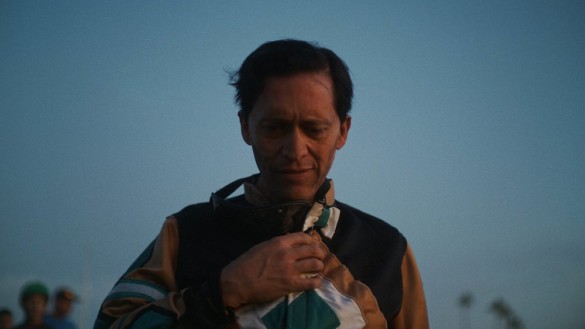 Synopsis: An aging jockey desperately tries to stay in the game, even as a talented rookie appears, claiming to be his son.

While there have been many films about racehorses, there have been very few, if any, that have been about the jockeys that ride them. The life of a jockey is unglamorous, difficult, and often painful, sometimes even tragic. Jockeys are elite athletes with a unique skillset, without which a multi-million-dollar industry would collapse, and yet they are often treated no better than the hired help. The spotlight rarely finds these humans who dedicate their careers—and often their lives—to the sport of horse racing, which is why Jockey, a new film from Clint Bentley, is all the more moving and vital.

In his introduction of the film before its showing at the Toronto International Film Festival, Bentley reveals that he is the son of a jockey and has always wanted to tell his father’s story and the story of all the people who live and work in the world of horse racing. His father would undoubtedly be proud with the film that Bentley delivers, which he also co-wrote with Greg Kwedar, as Jockey is a supremely sublime cinematic experience that resonates with a deep soul and heartbreaking clarity.

Clifton Collins, Jr. plays Jackson Silva, a veteran jockey whose body is starting to give out. The vet at the racetrack begs him to go to a real doctor, but Jackson knows that, in the sport of horseracing, any sign of weakness from a jockey is a liability, so he soldiers on, hoping for one last great ride before he hangs up his spurs. When Ruth (Molly Parker), his longtime trainer, shows up with a new young horse, Jackson can instantly tell the horse is a champion, the kind of horse jockeys dream of riding. Ruth, who is loyal to Jackson, promises that her new horse is his to ride, which invigorates Jackson, helping him stave off his pains and recommit to his sport. But when a rookie rider (Moises Arias) shows up on the circuit claiming to be his son, it complicates things for Jackson, who has never been able to commit or follow through on anything in his life outside of racing. He is forced to confront both his past and his future, while trying to win one last race.

Collins, a longtime character actor, delivers poignantly in a performance that carries the film on its shoulders, as the audience experiences everything that Jackson experiences, and we have to feel his highs and his lows, his doubt and his hope, his fear and his pain. Collins delivers a masterful performance at the center of this gloriously stripped-down, no-frills, melodrama-free reflection of a man facing the end. Collins manages to find every bit of pathos without a note of self-pity, mining the humanity that lives deep within a character who has only known one thing his entire life and is now facing existence without it. The performance is so subtle it will no doubt be underestimated, but there is no denying that this is a performance that deserves to be remembered deep into awards season.

While Collins’ performance is certainly worthy of high praise, as is the superb performance turned in by Parker, the artist whose imprint on Jockey is most unassailable is cinematographer Adolpho Veloso, who paints the canvas with one gorgeous shot after another. Reminiscent of Nomadland in so many ways, Jockey similarly captures an essence of Americana and the down-to-earth and hardworking people who live in the shadows and make the wheel turn. And like Nomadland’s Oscar-nominated cinematographer Joshua James Richards, Veloso shoots the Arizona landscape of Jockey with a painter’s brush, shooting most scenes at twilight, capturing the deep hues of a changing sky and the dramatic silhouettes that emerge in the looming darkness. I honestly can’t imagine seeing a more beautifully-shot film this year, and here’s hoping this film has its own racehorse legs to keep it in the awards conversation for the next several months.

Bentley’s choice to allow Veloso free rein was the best choice he made, but the other (other than casting Collins) was the decision to make a movie about horse racing that doesn’t ever actually show a horse race. While there are races in the film, Bentley instead keeps his lens trained on a closeup of the jockey, watching the race play out on his face. It is so refreshing to see an American filmmaker resist the urge to artificially pump up the audience with the adrenaline rush of a Hollywood-style racing scene. When the story is about the human on the horse, it’s so much more effective for the audience to ride with that human instead of watching from a distance, especially when the actual outcome is truly secondary.

It’s too bad that Jockey is coming out less than a year after Nomadland took the world (and the Oscars) by storm, as it will no doubt suffer many comparisons to that Chloé Zhao Best Picture winner. Admittedly, it is hard to not think of Nomadland during the first fifteen minutes of Jockey, but once the film finds its rhythm, it settles into its own unique stride and manages to separate itself with aplomb, crossing the finish line with a grace and beauty all its own.