Movie Review: ‘Isn’t It Romantic’ is fun, ridiculous and a different kind of romantic comedy 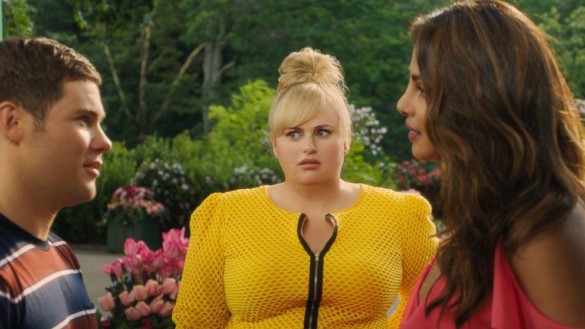 Synopsis: A young woman disenchanted with love mysteriously finds herself trapped inside a romantic comedy.

I’ve said before that I’m not a huge fan of romantic comedies, so normally I wouldn’t run to a theater to see one. I am however, a huge fan of Rebel Wilson so I couldn’t pass up seeing her star in a rom-com while making fun of other rom-coms. Isn’t It Romantic was super fun, hilarious, and just an overall enjoyable movie that lived up to the trailers.

Isn’t It Romantic is about Natalie (played by Rebel Wilson) and her head injury induced journey into the land of romantic comedies. She hates rom-coms, she’s oblivious to flirting or romantic gestures around her, and doesn’t have the best opinion of herself. After getting mugged and knocking herself unconscious, she wakes up in a suspiciously nice emergency room with a suspiciously attractive doctor (played by Lucifer’s Tom Ellis). She runs off to discover the world is better looking, better smelling, she can’t use certain swear words without being interrupted by loud noises, and everyone is weirdly nice to her. She realizes she’s stuck in a PG-13 romantic comedy and in true Rebel Wilson fashion, she isn’t having any of it, saying “it’s like the matrix for lonely women”. Natalie spends the rest of the movie trying to get back to her “normal” life while taking any chance she can get to point out that everything is ridiculous and that romantic comedy stereotypes are lame.

One of my favorite things about this movie was how relatable it is. While Rebel Wilson’s style of comedy may not be for everyone, I think she’s very funny. Wilson finally has a chance to shine in a leading role and I think she easily carries the film. This movie was a great first starring role for her to show off all her go-to humor- physical comedy, snarky comments, and self-deprecation. I spent most of the film laughing because I feel like I would be acting the same way if my life suddenly turned into a cliché rom-com. The supporting cast was also great. Adam Devine is the best friend and loveable coworker Josh. I love Rebel Wilson and Adam Levine together. They were funny as background characters in Pitch Perfect, and I think they are perfectly capable in starring roles. Liam Hemsworth was also funny, he plays Blake, the stereotypical rom-com male lead. Priyanka Chopra, Brandon Scott Jones and Betty Gilpin also give good supporting performances.

Isn’t It Romantic spends most of its 88 minutes poking fun at itself and other rom-coms. It’s filled with references to popular movies from the genre, even using some famous quotes and memorable scenes. There are many campy jokes that in any other movie (without Rebel Wilson to question them) would be too much. For example, a good-looking police officer’s last name is “Hansom”, and birds fly in heart-shaped formations. There are even a few musical numbers, a karaoke bar scene being my favorite.

The only negative comments I have about the film is it does suffer from “lots of the funny bits were in the trailers” but there were enough that were not in them that I didn’t mind. It was also a little predictable at times.

Isn’t It Romantic is a fun, ridiculous, and different kind of romantic comedy. It made me laugh almost the entire time, it has a great cast, and it didn’t have that cliché format that many movies in that genre gear towards. I highly recommend it to anyone that’s a fan of Rebel Wilson and/or is in need of a good laugh.