Movie Review: ‘IO’ is a jumbled, spoon-feeding mess of a film 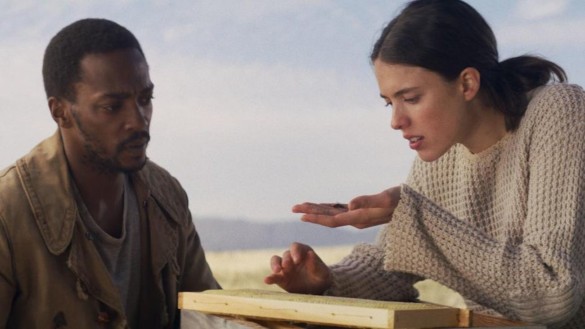 Synopsis: As a young scientist searches for a way to save a dying Earth, she finds a connection with a man who’s racing to catch the last shuttle off the planet.

As Netflix’s new film IO begins, you get a sense that there’s a fascinating theme building. With voiceover, the film’s main character, Sam (Margaret Qualley), tells us that Earth has begun to deteriorate to the point that it seems to be against its very inhabitants. I strapped myself in preparing for a post-apocalyptic film with interesting climate change undercurrents.

Too bad the rest of the film completely fails at following through.

The basic premise is that most of earth’s inhabitants have now fled to the far reaches of space for a colony near Jupiter’s moon, IO (hence the film’s title). Sam is one of the few left on Earth as she attempts to carry on the research of her father – famous scientist Dr. Henry Walden (Danny Huston). Sam believes that Earth can continue because life has always shown a determination to survive. She keeps correspondence with her lover, Elon (Tom Payne), who is on the space colony. He implores her to leave on the last shuttle scheduled to depart Earth. As she is preparing to make her decision, a man named Micah (Anthony Mackie), arrives in a balloon to take her father on the final shuttle. When he realizes that Dr. Walden is not there, the two must decide whether they will leave Earth to its fate or attempt survival.

Again, I was initially intrigued by the setup of the possibility that Earth itself might turn on the inhabitants who have polluted and squandered its resources for so long. But the film departs from this conceit when it is convenient to do so. There didn’t seem to be any backbone to the screenplay. Earth is a villain when the story needs its post-apocalyptic rising action, but then it becomes the survivalist companion when an emotional push is needed.

Even the idea that Earth’s final residents must face the choice of whether to depart to a convenient space colony and leave behind this once-great planet has its own fascinating possibilities. How would you wrestle with that decision if it was left to you? But, again, the film crumbles whenever it unearths a worthwhile thread. It is completely unable to rise to the task of following through on any of the ideas it presents.

I was also completely nonplussed by the film’s characters. Sam is presented to us as a precocious scientist’s daughter with a propensity for scientific inquiry herself. But then there are moments – such as one of the film’s highest points of tension where she sidetracks an important journey because she’s always wanted to go to the Museum of Modern Art – where she seems to completely lose any and all scientific impulse. I’m all for characters that are not written rigidly and have room to err and live outside of their character bio, but the way Sam was written seemed to be a massive stretch.

Given that we aren’t quite sure of her age in the story, one might also balk at the way she is treated by Micah. There is a problematic scene where the clearly much older man watches her shower and a groan-inducing scene where the two presumably have sex off-screen because they may just be the last two people on Earth. One might say that their relationship bears an important role in the way the film chooses to end, but even so their relationship is handled clumsily at best.

Speaking of the film’s ending, this is a classic case of a film ending a few scenes past when it should have. What tension the film has builds to a conversation between Sam and Micah. The film should have ended when this interaction ends. Without giving away spoilers, I will simply say that if the film had chosen to end here, the viewer would at least have the opportunity to wrestle with some ambiguity and possibly salvage some of the experience. As it is, the film instead decides to spoon-feed the story’s meaning to us and leave the viewer with a sour taste.

That isn’t the only time during the film where we are spoon-fed meaning through dialogue. Just a couple scenes earlier, one of the characters completely explains the meaning of the W.B. Yeats sonnet Leda and the Swan, the content of which features heavily in the film’s screenplay. But this underlying theme never felt earned. Honestly, it simply felt like a way to get Sam to go to the Museum of Modern Art so that there could be a scene with statues and art in a post-apocalyptic setting. But simply talking about art doesn’t make the film artistic.

Overall, the film is a jumbled mess that never really presents a cohesive narrative. The beginnings of a strong film are there, but they seem to be lost in all the haze of this polluted hellscape. At least I can take comfort in the fact that – with this being the first film of 2019 that I’ve seen – things can only go up from here.