Featured: The Greatness of Almodovar In The 1980s 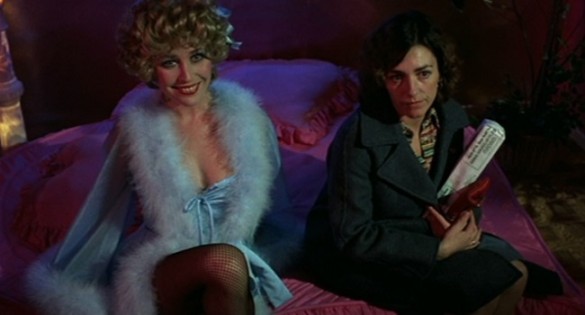 Pedro Almodovar is in my book among the five greatest living directors in the world and an auteur among auteurs. His films are colorful and full of vibrant characters out of daily life and his own background. In honor of his upcoming film Dolor y Gloria, as well as his 70th birthday this September, it feels right to take a look at his early career.

Almodovar grew up under the iron grip of General Franco’s dictatorship but found himself living in the rural fields far from Madrid in Castilla–La Mancha. With only one movie theater, he went there often and later said that “Cinema became my real education, much more than the one I received from the priest.” At 18, he moved to Madrid against his parents’ wishes, and with no film schools open at the time – Franco closed it due to the belief that communism was being taught there – he taught himself how to direct with a Super-8 and supported himself doing various jobs. Later, his younger brother, Augustin, would move to Madrid and begin a production partnership.

The 1970s was the era of change. Franco died, the King of Spain began the country’s transition to a modern democracy and the counterculture movement known as La Movida Madrileña opened all the doors that were banned previously. Drugs, free love, rock music, experimental films, and radical literature were rampant in Madrid and Pedro Almodovar was in the middle of it. As an openly gay man, he produced short films (one being called, Fuck Me, Fuck Me, Fuck Me, Tim) seen in underground clubs that slashed the morals of the old Spain down and gave him the power to make his early films of the 1980s that made him legendary from the 90s onward.

His first feature was Pepi, Luci, Bom, the story of the unlikely relationship between three women that bore the cores of later Almodovar values: feminism, independence, anti-chauvinism, and strange sex. The movie is as campy as a John Waters flick, even with technical issues that are visibly seen, but there is a golden shower scene during a knitting lesson. Unfortunately, it has not been released on DVD and I have seen only parts it on YouTube, but the parts you can find explains it all.

Almodovar’s next film, Labyrinth of Passion, is about a nymphomaniac who falls in love with a gay Middle Eastern Prince who is out to get random lovers. There are more themes of love and sex and was very daring in a time where the AIDS crisis was beginning; again, not on DVD in the US (but in the UK), so only parts of it can be found on YouTube, which is self-explanatory. His third film attacked the religious establishment. Dark Habits is about a singer who hides with a group of nuns that are casual drug consumers who also know that it is a sin but they appreciate it in order to sympathize with other drug addicts like the hiding cabaret singer.

His next features began a slow transformation into mainstream works. What Have I Done To Deserve This is about a woman in an unhappy marriage living in the tower blocks with her two teenage sons, both of them dysfunctional in their own right. Her neighbor is a very kind prostitute and the daughter of another neighbor has telekinetic powers, giving her some help in getting through rough days. Matadorwas a daring follow-up with the story of a femme fatale who commits multiple murders and a bullfighting student who, after raping a woman, falsely confesses to those crimes. A detective knows that this cannot be true and begins to search for the real killer. After a minor role in Labyrinth of Passion, this was Antonio Banderas’ second collaboration with Almodovar and made four more films with him.

Banderas would move into the more psychopathic position in Law of Desire as a man obsessed with a famous gay film director who he has an affair with. As a more mature film, Almodovar, making the film under his production company El Deseo, also portrays the director’s transsexual sister as an equal member of the family along with the precocious ten-year-old who the sister acts as a surrogate mother. The story of obsession and the demand to be wanted and respected as both lover and artist collide. It is a tragicomedy of unrestrained desire that goes over the top.

Women On The Verge Of A Nervous Breakdown (1988)

The international breakthrough came in one of Almodovar’s most light and most funny movies which earned him an Oscar nomination for Best Foreign Film. A voiceover actress has an important message for her ex-lover who is leaving the country but cannot track him down. In the meantime, her friend finds herself in trouble with the law after having a relationship with a wanted terrorist that she was not aware of. A couple comes to the apartment intending to rent it out; it is the ex-lover’s son and his snobby fiancee. And then there is Ivan’s angry mother bent on revenge against her ex-husband who jolted her years before. It results in a frantic, hilarious chase to find and save the man in the center of this struggle.

On my Top 3 of favorite Almodovar films, the Hollywood-inspired Breakdown is a throwback to the screwball days with its physical comedy, broken hearts, and frantic behavior such as the chase scene towards the climax of the movie. The film goes away from the free sex and heavy content to stick with melodramatic basics that evolve onward in a span of two days. Even in the setting of sadness and freight, the women stick together. For lead actress Carmen Maura, who had been in multiple films of Almodovar’s going back to his short film days in the 70s (and reunited in 2006’s Volver), she handles this delicate balance gracefully and with conviction as we follow her misadventures of being jilted lover.

The rest of Almodovar’s career has bloomed to its current state of legendary as an auteur open with the themes of womanhood, passion, freedom, family, sexuality, and identity mixed with multiple narratives and the influences of Pedro’s own career. References to cinema, literature, and the Spanish culture is continuous; as time went on, he matured more and more with his stellar control as both writer and director. The 1980s was a massively important era for Spain in making itself a modern, free nation, and for Almodovar as a new name to be noticed in the medium.