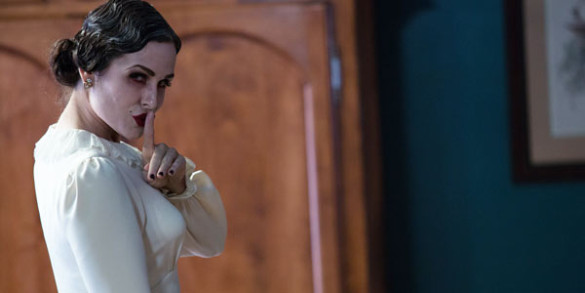 Synopsis: The haunted Lambert family seeks to uncover the mysterious childhood secret that has left them dangerously connected to the spirit world.

James Wan continues to churn out solid horror flicks by sticking to similar themes and techniques alongside a well-crafted screenplay. Wan gets strong performances from Rose Byrne and Patrick Wilson, but especially Garrett Ryan who plays the Patrick Wilson character in flashbacks to the past. You can tell that Wan worked hard to not only cast a child actor who was talented, but one that had similar facial expressions and mannerisms to those of his elder double Patrick Wilson. This is good evidence of Wan’s keen eye for talent. I greatly appreciate the consistency in length to the first movie, as sometimes director’s will go crazy and extend lengths of sequels because they think it adds more to the film. The editing is a bit overwhelming at the beginning of the film so be sure to refresh your mind on what happened in the first film before seeing this one. They work similar to the way Back to the Future films do in that you MUST see the first to understand the second, etc.

The script written for the screen by Leigh Wannell runs quite smoothly and aside from some cheesy dialogue, it works. It never takes itself too seriously and is a lot of fun from beginning to end with surprises thrown in here and there which made me respect the thought and effort that goes into this franchise. It’s what horror should be in 2013. Wan references the landmarks of horror that came before it without being a copycat. He does what Tarantino tends to do but the difference being that Wan likes referencing more popular movies than QT does. Tarantino uses them as a derivative where Wan uses them to pay homage to and build upon for his purposes.

Wan’s strengths to cast are not up for debate in my opinion, but I do have to wonder why there is an inconsistency between films in the performances we see from certain pieces of the puzzle. The most glaring one for me was Lin Shaye who came off extremely well in the first film, but seems almost amateur at some points here to me. I’m not sure if it’s direction or if it was an issue with Shaye but to me she was a weakness in this film. The other performances were good but no one was spectacular. This cast seems to click well together and Rose Byrne along with Patrick Wilson work well with the child actors in both films. Wan has created a franchise that, if continued, will be one of the better franchises in the genre lately (although that’s not saying a lot). A big part of that is the performances by his finely selected cast.

I watched this in a Cinemark XD theater which meant the volume was up and everything was extremely loud. I like the bumpers to both films even though the violins screeched at a deafening level for us in the theater. It always reminds me of Drag Me To Hell, even though many other films have undoubtedly done this same thing before Raimi did. Joseph Bishara did a nice job with the score and continues to be a solid accomplice to James Wan after they worked together for the first Insidious and The Conjuring from earlier this year.

Final Thoughts: I watched this film as part of a double-feature showing both Insidious films and felt that they worked extremely well together. This is not one of my favorite franchises by any means but it is a solid one so far, and I think fans of the horror genre will appreciate the craftsmanship and thought that was put into this, while general audiences will enjoy it for a scary night out filled with jumps and creepy monsters.